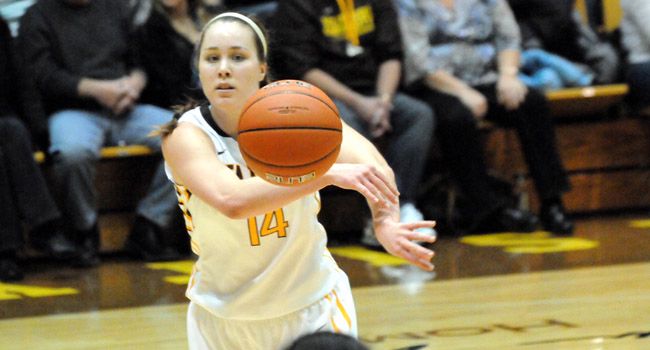 Demmings got into the paint and scored to put the Raiders up by one. Valparaiso came down the floor and Scott’s 18-footer at the buzzer hit the side of the rim and bounced away.

“She’s quick, she got to the rim and she scored,” Crusader head coach Tracey Dorow said of Demmings. “They put the ball in the hands of the best player on the floor and she scored.”

The Crusaders had battled back from a 13-point first-half deficit to take their first lead of the game at 53-52 on a three-point play from Tabitha Gerardot (Fort Wayne, Ind./Canterbury) with 5:33 left. The play capped a 14-2 run.

“We ran in transition, we moved the ball well,” Dorow said. “We found the open person and we knocked down shots. We were a lot more aggressive and played with a lot more confidence in the second half.”

Charae Richardson (Lafayette, Ind./Jefferson [Vincennes]) opened the run with a 3-pointer, and after a basket from Scott, Richardson scored in transition and was fouled. Her free throw cut the lead to three.

Gerardot tied the game with a 3-pointer and after a jumper from Demmings, her three-point play gave the Crusaders the lead.

Wright State built the lead to five, but Jessi Wiedemann (Palatine, Ill./Fremd) tied the game at 62 with five-straight points. After swishing a pair of free throws, she buried a 3-pointer from the corner to even things up with 1:57 to go.

Gerardot recorded her sixth double-double of the season (19th career) with 18 points and 10 rebounds. Her jumper early in the second half gave her 1000 points for her career, becoming the 13th player in Valparaiso history to record 1000 points.

“Everybody is capable of contributing and we just need to make the most of the opportunities we get, every time they go out on the floor,” Dorow said.

The Crusaders shot 15-of-28 (54 percent) from the field in the second half after making nine of 27 first-half attempts.

Wright State led from the outset and took its largest lead of the game at 26-13 with 5:23 left in the first half.

Valparaiso (7-12, 2-4) returns to action on Saturday, Feb. 2 when the Crusaders host Cleveland State at 1:35 p.m. The game will be broadcast on WVUR-FM 95.1, Valparaiso. A link to the live audio, as well as live video and live stats, can be found on www.valpoathletics.com.