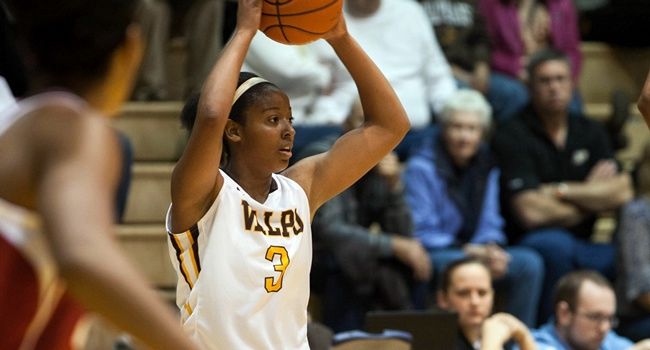 Three Crusader players scored in double-figures, led by 16 from Shaquira Scott (Wilmette, Ill/Loyola Academy), but the Detroit outscored Valparaiso by 17 in the second half and beat the Crusaders 70-61 on Saturday afternoon at Calihan Hall.

Scott finished 6-of-14 from the field, with nine of her 16 points coming in the second half.

“In the first half, we executed the game plan the way we wanted to,” Crusader head coach Tracey Dorow said. “We got (Shareta) Brown in foul trouble and I thought we had some momentum and we executed our offense really well.”

Valparaiso, which led 37-29 at halftime scored on back-to-back possessions to open the second half thanks to a pair of jumpers from Laura Richards (Connersville, Ind./Connersville) to lead 41-29. The Titans then embarked on a 12-2 run to tie the game at 43 with 12:45 to go on a jumper from Audrey Matteson.

A pair of free throws from Scott got the Crusaders to within six at 62-56, and they would twice more get within six on jumpers from Gina Lange (Wyoming, Minn./Forest Lake) and Scott, but Valparaiso could not get any closer than that.

Shareta Brown scored eight of her 12 points in the second half for Detroit after missing most of the first half with two fouls, and Rosanna Reynolds scored all nine points in the final 20 minutes for the Titans.

“They took it to us and really attacked and made us move our feet and got to the free throw line when we didn’t,” Dorow said.

Charae Richardson (Lafayette, Ind./Jefferson [Vincennes]) opened the spurt with a 3-pointer from the wing. Jessi Wiedemann (Palatine, Ill/Fremd) followed with a backdoor layup.

The Titans briefly took the lead, but Tabitha Gerardot (Fort Wayne, Ind./Canterbury) followed with a basket to put Valpo back in front. Liz Horton (Cannelburg, Ind./Barr-Reeve) followed with a tip in.

After the Titans tied the game on a trey from Senee Shearer, the Crusaders reeled off 12-straight points, Richards started with a 3-pointer from the corner. Horton followed with a pair of baskets. Scott added a jumper and Jessica Carr (Arcadia, Ind./Hamilton Heights) capped the run with a 3-pointer in transition.

“I was very proud of the way we rebounded the ball,” Dorow said.

Shearer led Detroit (13-8, 6-3 HL) with 17 points. Brown added 12, while Reynolds had nine and Demeisha Fambro and Destiny Lavita-Stephens each had eight.

Valparaiso (8-13, 3-5) starts the second half of Horizon League play on Wednesday, Feb. 13 when the Crusaders head to Chicago to take on Loyola at 7 p.m. The game can be heard live on WVUR-FM 95.1, Valparaiso. A link for the live audio, as well as live video from the Horizon League Network and live stats, will be available on www.valpoathletics.com.