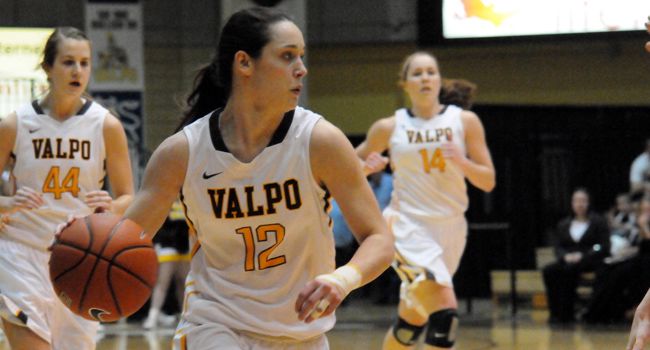 Backed by a double-double from junior Tabitha Gerardot (Fort Wayne, Ind./Canterbury), a career-high from sophomore Jessica Carr (Arcadia, Ind./Hamilton Heights) and a 12-point, six rebound performance from senior Laura Richards (Connersville, Ind./Connersville), Valparaiso led for the final 30-plus minutes and beat UIC 67-57 in the first round of the Horizon League Tournament on Monday night at the Athletics-Recreation Center.

With the victory, the Crusaders advance to Wednesday’s quarterfinals at top-seeded #20/20 Green Bay. That game tips at 7:00 p.m.

“I’m very, very proud of the effort,” Crusader head coach Tracey Dorow said. “The game was very physical and we did not allow it to take us down. We didn’t hang our heads if we did turn the ball over. We rebounded the heck out of the ball.”

Valparaiso outscored the Flames 20-10 over the final 9:57 of the first half to turn a one-point lead into a 37-26 advantage at the break. Gerardot, who posted her 11th double-double of the season with 25 points and 11 rebounds, scored nine points during the run. Carr had a basket in the paint and a 3-pointer from the wing on the spurt.

UIC trimmed the lead down to seven at 43-36 with 11:43 left, but the Crusaders promptly answered with a 7-2 run. Freshman Lexi Miller (Caledonia, Mich./Caledonia) started the run with a pair of free throws. Gerardot followed up with a three-point play, and Carr closed it out with a layup in transition to put Valpo up 50-38 with 9:52 left.

The Flames followed with a 7-0 run to cut the margin to five. They continued to chip away at the lead and closed to within three at 54-51 with 4:49 to go. Gerardot and junior Liz Horton (Cannelburg, Ind./Barr-Reeve) had back-to-back baskets to push the margin back to seven.

Terri Bender banked in a 3-pointer for UIC to get within four, but the Flames could not get the deficit down to one possession. Richards was 9-of-10 at the free throw line in the final two minutes to preserve the win.

The Crusaders finished with a 40-29 rebounding advantage and totaled 15 assists on 21 baskets. In addition to five from Richards, Carr dished out four assists.

Valparaiso attempted 29 free throws, connecting on 22 of them. The Crusaders had a 22-7 edge in made free throws.

“We made it extremely hard for them,” Dorow said. “We forced them to take some tough shots, and to their credit, they made some of them to keep the game close.”

Valparaiso (11-19) finishes with a 9-5 record at the Athletics-Recreation Center. Video coverage of Wednesday’s game will be provided by the Horizon League Network. Links for the live video and the live stats will be available on www.valpoathletics.com.