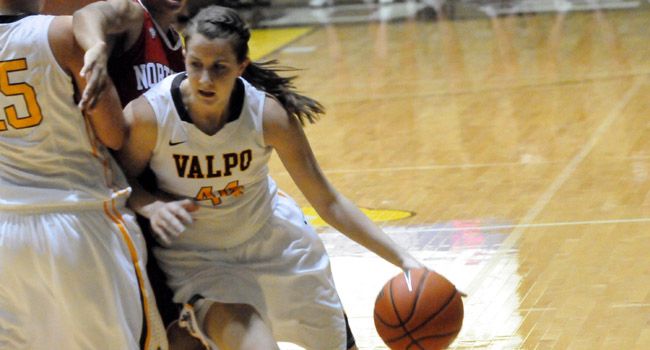 The Crusaders collided with one of the most athletic teams in the country Saturday as they fell 96-46 to the #6 Fighting Irish at Purcell Pavilion.

"Obviously, they're extremely athletic but they also work very hard. They don't take plays off. Because of this experience, I hope our players strive to play at that level on a consistent basis," head coach Tracey Dorow said.

Elizabeth Hamlet (McBain, Mich./McBain [Oakland]) made her Crusader debut in front of 8,508 fans. The fifth-year senior has been recovering from a concussion sustained in late October. She logged 21 minutes Saturday, but that number is likely to increase as her conditioning ramps up. Hamlet received medical clearance Thursday before participating in her first practice yesterday in nearly three weeks.

Notre Dame jumped out to a 9-0 lead after four unsuccessful trips down the court to begin the game. Jessi Wiedemann (Palatine, Ill./Fremd) knocked down two treys in a span of 60 seconds to bring it to an 11-6 contest.

Trailing 23-15 midway through the first half, Valpo had a chance to cut the deficit to five but a three-point attempt from Hamlet didn't fall. The Irish put up points on their next three possessions to extend the lead to 28-17.

The Irish closed the first stanza on a 23-9 run as they led 46-24 at the break. An aggressive, athletic Notre Dame defense accumulated ten steals to create a 14-0 fast break point edge in the first 20 minutes.

Notre Dame kept its foot on the accelerator in the second half as it opened with a 20-5 run. The home team cruised to a 96-46 final.

Dorow received another strong effort off the bench from Liz Horton (Cannelburg, Ind./Barr-Reeve). For the second straight game, the senior scored 11 points in under 20 minutes of action. Horton was a perfect 4-for-4 from the line, and 3-for-4 from the floor including a made three-pointer on her only attempt.

"I thought our kids competed very hard. We need to do a better job of taking care of the ball. The turnovers we have can't lead directly to easy points on the other end," Dorow said.

The Irish outscored the Brown and Gold 62-10 in the paint, many of those points coming off layups.

The Crusaders shot an excellent 15-of-17 from the foul line as they boosted their Horizon League-leading free-throw percentage to .789.

Valpo's most difficult road swing of the season is now complete. The Crusaders will host IUPUI Thursday night at the ARC. The home opener will tipoff at 7:05 pm. Be sure to check valpoathletics.com for all your media coverage.