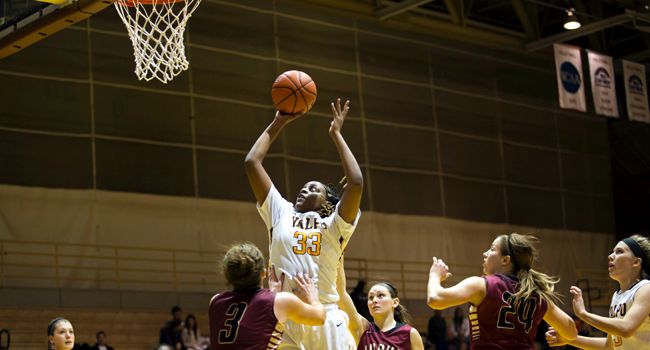 Karungi put up 15 points and 14 rebounds against Toledo on Saturday. She was named Most Valuable Player after Valpo's 63-61 win. (Ruoxi Wang)
Valparaiso at Toledo | December 07, 2013
Related Links
Related Links

The Crusaders managed just four offensive rebounds versus Toledo, but their final one was all that anyone will remember.

Sharon Karungi (Kampala, Uganda/[Northern Oklahoma College] was in the right place at the right time when Lexi Miller (Caledonia, Mich./Caledonia) drove down the right side of the lane with the score tied 61-61. Miller's shot attempt with six seconds remaining was off-target but caromed to Karungi. The junior caught the ball and put it right back up and in to give the Crusaders a 63-61 lead with three seconds in the game.

Toledo's Andola Dortch fired a desperation shot off, but it flew well off the mark as Valpo celebrated its second win at Savage Arena in as many days.

"I don't think our kids realize how big this win is. With the support that the Toledo women's basketball gets, not many teams walk out of Savage Arena victorious. We played together the whole game. Nobody tried to do too much. Both Liz and Elizabeth (Hamlet) really stepped up. Liz scored, and Elizabeth kept the energy level high," head coach Tracey Dorow said.

For the second straight day, Liz Horton (Cannelburg, Ind./Barr-Reeve) shot lights out in the first half. The senior was 3-for-3 from beyond the arc in a nine-point period. For the Toledo Invite, Horton was a combined 8-for-9 from the field and 4-for-4 from three-point land in the first half. Twenty of her 24 points over the weekend came in the first stanza.

Neither team led by more than five points until the Crusaders took a 30-24 lead on a Lexi Miller free-throw with three minutes left. A pair of Jessi Wiedemann (Palatine, Ill./Fremd) foul shots extended the Brown and Gold's lead to eight. Toledo scored the final five points of the first half as Valpo took a 35-32 lead into the locker room.

A wild second half ensued that featured five ties and ten lead changes. Toledo's Janelle Reed-Lewis knocked down a three-pointer with 16:50 left to cut the Valpo lead to two. The game remained a one-possession tilt the rest of the way.

Toledo was on top 59-56 before Wiedemann recorded two of her nine second-half points. Karungi followed with a three-point play to give the visitors a two-point advantage.

Reed-Lewis, who dropped in eleven points in the final half, scored Toledo's last points on a jumper with 3:43 to go. The Rockets drew iron on four three-point attempts in the closing three minutes.

Toledo had possession of the ball with 20 seconds remaining. Elena De Alfredo had a look from outside, but it clanged out and Horton pounced on the rebound.

Out of a timeout, Miller raced down the right side of the lane and tossed up a runner that didn't fall. Unguarded, Karungi grabbed the rebound and dropped in the game-winner.

"I was really pleased with how we executed the game plan. (Associate Head Coach) Kurt (Westendorp) prepared a great scouting report and our kids did an outstanding job adjusting when we switched our defenses." Dorow said.

Wiedemann was voted to the All-Tournament Team. The sophomore scored 29 points in the Invite to go with nine assists and ten rebounds. She logged 73 minutes in the two-day event.

Karungi was named the Most Valuable Player. Over two games, she scored 31 points and pulled in 28 rebounds. Karungi was 15-of-27 (55.6%) from the floor in two Valpo wins.

Valparaiso (2-7) will now return home for its longest homestand of the season. The Crusaders will play host to Butler (Dec. 13) before taking on Western Michigan (Dec. 29) and South Dakota (Dec. 31) to conclude the calendar year.