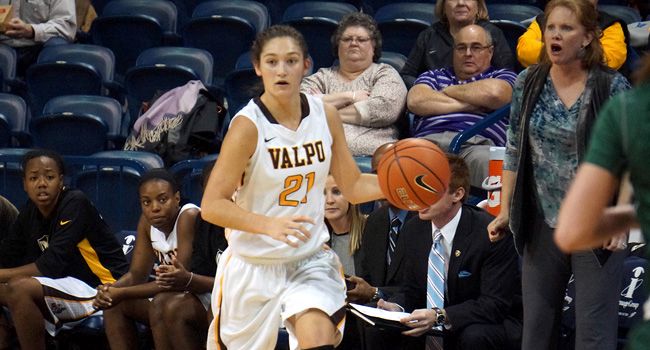 Next Up in Crusader Basketball: After playing eight of its first nine games away from the Athletics-Recreation Center, Valpo returns home to close out 2013. Friday’s game signals the beginning of the Crusaders’ longest homestand of the season. The Brown and Gold will play only one road game over the next 34 days.

Last Times Out: Valpo is riding high after winning both games at the Toledo Invite last weekend. The Crusaders downed Chicago State 74-50 on Friday before notching a win over Toledo inside the intimidating Savage Arena on Saturday. Sharon Karungi was named Most Valuable Player of the Toledo Invite after securing strong double-doubles in both tilts. In addition to registering the game-winner against the Rockets in a 63-61 thriller, the junior scored 31 points and grabbed 28 rebounds over the weekend. Jessi Wiedemann was named to the All-Tournament Team after recording 29 points, 10 rebounds, nine assists, and four steals in the two contests.

Following the Crusaders: Audio - WVUR (95.1 FM, Valparaiso) - Joey Basil (play-by-play) and Parker Gatewood (color).
Links for the audio, video, as well as live stats will be available at ValpoAthletics.com. In addition, ValpoGameday.com is a one-stop shop for live video, stats and social media interaction, all on the same page.

Head Coach Tracey Dorow: Tracey Dorow (13-27) is in her second season at the helm of the Valparaiso women’s basketball program in 2013-14. In her first season, Dorow led the Crusaders to eleven victories overall, including five in Horizon League play. Dorow arrived in Valparaiso after 14 seasons at Ferris State. She compiled a 232-163 record while with the Bulldogs. Furthermore, Ferris State posted the #1 grade point average in all of Division II for the 1999-2000 women’s basketball season as well as the #2 ranking in 2002-2003.

Series Notes: Butler leads the all-time series versus Valpo 21-7. The Crusaders have won two of the last three matchups including a sweep of the season series in 2011-2012 when Butler was still a member of the Horizon League. The Bulldogs took last year’s tilt 69-55 in Indianapolis.

Storylines...
- Friday is the 29th meeting between the in-state rivals.
- This is the second time the Valpo and Butler women have met since the Bulldogs left the Horizon League.
- The Bulldogs last won at the ARC on March 5th, 2011.
- Butler’s Blaire Langlois and Valpo’s Abby Dean were teammates at Carmel High School.
- Butler has yet to win a road game in 2013-14.

@ButlerWBB
- @ButlerWBB has scored wins over Cleveland State, Utah, and Eastern Washington thus far.
- Two of @ButlerWBB’s five losses have come in overtime (Eastern Michigan and St. Mary’s).
- Daress McClung leads @ButlerWBB in scoring with 15.8 PPG.
- McClung was a member of the Preseason All-Big East Team.
- McClung recorded 16 points and six blocks for the Bulldogs in Butler’s 69-55 win over the Brown and Gold last season.
- Senior Mandy McDivitt is 7th all-time at Butler in career three-point field goals (129)
- Taylor Schippers led @ButlerWBB with 22 points in 27 minutes in last year’s tilt against Valpo.
- Liz Stratman is averaging 15.4 points per game.
- Stratman was named the Big East’s Player of the Week on Dec. 2nd.
- Beth Couture is 178-158 in her 12th season as the head coach of @ButlerWBB.
- Couture’s career record is 439-280.

Elizabeth Hamlet
- Shot 3-for-5 from the field in Valpo’s 63-61 defeat of Toledo at the Toledo Invite.
- Has been in starting lineup the past two games.

Abby Dean
- Leads the Horizon League in free-throw percentage (91.3%), and has converted 22 of her last 23 attempts from the line.
- Has made at least two field goals in all but one game in 2013-14.
- Has been in the starting lineup all nine games for the Crusaders.
- Registered a career-high 17 points at Tennessee Tech on Nov. 24th, 2013.
- Scored first collegiate points at historic Cameron Indoor Stadium last November.
- Made collegiate debut on November 14th versus Purdue-Calumet.
- Tossed in 11 points versus Western Michigan in 19 minutes last December.

Lexi Miller
- Tallied 13 assists to five turnovers during the Toledo Invite.
- Scored a career-high 18 points vs. Tennessee Tech.
- Possesses best assists/turnover ratio of any Crusader (27:23).
- Leads team in steals with 17.
- Accumulated 15 points, four rebounds, four assists, and three steals (all career highs at the time) at Saint Louis on Nov. 10th, 2013.
- Made collegiate debut against the Indiana Hoosiers Nov, 9th, 2012.
- Made first start in Hinkle Fieldhouse versus the Butler Bulldogs.
- Scored 13 points in Valpo’s 88-62 victory over UIC on Feb. 16th, 2013.

Liz Horton
- Shooting 13-of-19 from the field including 5-for-6 from behind the arc in December.
- Leads team in both field goal percentage (49.1%) and three-point field goal percentage (42.9%).
- Has scored exactly 11 points on four different occasions this season (Illinois, #6 Notre Dame, Montana State, Toledo).
- Averaging 8.3 points in 19.7 minutes/game.
- Appeared in 30 games for the Brown and Gold a season ago.
- Named Crusaders’ Most Improved Player in 2012-13.
- Scored 19 points, including 3-for-3 shooting from behind the arc, at Western Michigan on Dec. 19th.

Sharon Karungi
- Grabbed 14 rebounds in both games of the Toledo Invite en route to Most Valuable Player recognition.
- Scored the game-winning put-back with three seconds to play against Toledo.
- Registered 17 points and 14 boards versus FIU for her third double-double of the season.
- Tallied her second double-double at Tennessee Tech, scoring 11 points and collecting 10 rebounds.
- Recorded her first double-double at Illinois on Nov. 12th, throwing in 15 points and grabbing 12 boards.
- Leads team in rebounds (57).
- At 6’2’’, Karungi is tallest player on the Valpo roster.

Jessi Wiedemann
- Named to Toledo Invite All-Tournament Team after scoring 15 versus Chicago State and 14 against Toledo.
- Has made multiple three-pointers in four games in 2013-14.
- Notched a career-high 14 points on 5-of-13 shooting at Tennessee Tech.
- Leads team in blocks (6), three-pointers (9), and average minutes played (35.7).
- Snapped a season-starting 0-14 slump from behind the arc at #6 Notre Dame, nailing three treys in a nine-point game.
- Played all 40 minutes in the season opener at Saint Louis on Nov. 10th, 2013, and set career highs in blocks (4) and steals (3) while scoring six points.
- Appeared in all 31 games including four starts as a freshman for Coach Dorow.
- Made collegiate debut versus Indiana
- Scored 13 points off the bench versus Detroit on Mar. 9th, 2013.