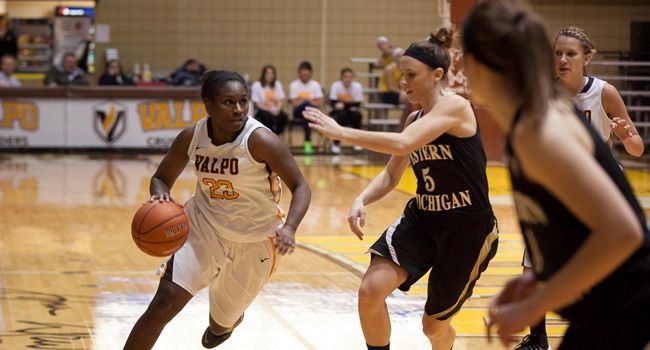 Next Up in Crusader Basketball: The Crusaders close out 2013 with a New Year’s Eve matinee versus South Dakota at the ARC. The Coyotes make their first ever trip to Valparaiso while the Brown and Gold host their final home non-conference game of the season. South Dakota is undefeated at home, but have compiled just a 2-6 record away from The DakotaDome. Tuesday’s game signals the end of Valpo’s longest homestand of the slate.

Last Time Out: Jessica Carr made her 2013-14 debut Sunday versus Western Michigan. Carr’s first shot of the season was a three-pointer which gave the Crusaders a one-point lead midway through the first half. Unfortunately, it was the last time Valpo led. Western Michigan led by ten at the break and opened the second half on a 21-2 run as they coasted to a 72-50 victory at the ARC. Charae Richardson shot 7-of-14 from the floor as she led all scorers with 18 points in the losing effort.

Following the Crusaders: Audio - WVUR (95.1 FM, Valparaiso) & Video (Horizon League) - Brandon Vickrey (play-by-play) and Renee’ Turpa (color).
Links for the video, as well as live stats will be available at ValpoAthletics.com. In addition, ValpoGameday.com is a one-stop shop for live video, stats and social media interaction, all on the same page.

Head Coach Tracey Dorow: Tracey Dorow (13-29) is in her second season at the helm of the Valparaiso women’s basketball program in 2013-14. In her first season, Dorow led the Crusaders to eleven victories overall, including five in Horizon League play. Dorow arrived in Valparaiso after 14 seasons at Ferris State. She compiled a 232-163 record while with the Bulldogs. Furthermore, Ferris State posted the #1 grade point average in all of Division II for the 1999-2000 women’s basketball season as well as the #2 ranking in 2002-2003.

Series Notes: Tuesday marks the first ever meeting between Valparaiso and South Dakota on the hardwood. In fact, the only Dakota team the Brown and Gold have faced was South Dakota State during the 2007-08 and 2008-09 seasons.

Storylines...
- Tuesday is the first meeting between these two teams.
- Valparaiso is as far east as South Dakota has traveled so far this season.
- South Dakota is the second Summit League team Valpo will host this season. The Crusaders played IUPUI on Nov. 21st.
- This is the fourth and final home game for the Crusaders before Horizon League play begins Jan. 9th vs. Youngstown State.
- Both teams feature just one true senior on their rosters.
- Both Tracey Dorow and Amy Williams are in their second seasons as head coach of their respective teams.
- Valpo will be the final Horizon League team on the court in 2013.

@SDCoyotesWBB
- South Dakota went 19-16 last year in its first season under Williams.
- Nebraska handed the Coyotes a 87-53 loss in Lincoln on Dec. 21st.
- The defeat snapped a five-game winning streak for South Dakota.
- The Coyotes have scored 74 or more points in six of their seven wins.
- In their six losses, they’ve been held to 61 or fewer points three times.
- Nicole Seekamp leads the SD offense in scoring (15.2) and assists (45).
- Raeshel Contreras and Polly Harrington are averaging 20 minutes a game, but both are in double-digit scoring (12.0 and 10.4, respectively).
- Amy Williams is 26-22 in her second season as the head coach of the Coyotes.
- Williams served as top assistant coach at Oklahoma State (2001-05) and Tulsa (2005-07).

Jessica Carr
- Made her season debut Sunday versus Western Michigan on Sunday, where she scored five points and notched an assist, steal, and rebound.

Abby Dean
- Tied a career-high in assists (5) versus Western Michigan.
- Leads the Horizon League in free-throw percentage (88.9%).
- Has made at least two field goals in all but one game in 2013-14.
- Distributed multiple assists in each of the last five games.
- Has started every game for the Crusaders.
- Registered a career-high 17 points at Tennessee Tech on Nov. 24th, 2013.
- Scored first collegiate points at historic Cameron Indoor Stadium last November.
- Made collegiate debut on November 14th versus Purdue-Calumet.
- Tossed in 11 points versus Western Michigan in 19 minutes last December.

Lexi Miller
- Averaging over 36 minutes/game the last seven contests.
- Tallied 13 assists to five turnovers during the Toledo Invite.
- Scored a career-high 18 points vs. Tennessee Tech.
- Possesses best assists/turnover ratio of any Crusader (29:28).
- Leads team in steals with 18.
- Accumulated 15 points, four rebounds, four assists, and three steals (all career highs at the time) at Saint Louis on Nov. 10th, 2013.
- Made collegiate debut against the Indiana Hoosiers Nov, 9th, 2012.
- Made first start in Hinkle Fieldhouse versus the Butler Bulldogs.
- Scored 13 points in Valpo’s 88-62 victory over UIC on Feb. 16th, 2013.

Charae Richardson
- Has registered at least 16 points in three of the last five games.
- Scored a career-high 23 points versus Montana State.
- Dished out a season-high seven assists at Tennessee Tech.
- Leads team in points/game (11.9) and is second in total assists (27).
- Scored 15 points in the season opener at Saint Louis on Nov. 10th, 2013.
- Played in all 31 games for the Crusaders last season, including 28 starts.
- Carried an 84.1 free-throw percentage.
- Finished second on the team last season in three-pointers (24) and assists (95).

Sharon Karungi
- Leading rebounder (9.3) for the Crusaders.
- Averaging 11.0 points per game.
- Tied for second in Horizon League with most double-doubles (5).
- Grabbed 14 rebounds in both games of the Toledo Invite en route to Most Valuable Player recognition.
- Scored the game-winning put-back with three seconds to play against Toledo.
- Registered 17 points and 14 boards versus FIU for her third double-double of the season.
- Tallied her second double-double at Tennessee Tech, scoring 11 points and collecting 10 rebounds.
- Recorded her first double-double at Illinois on Nov. 12th, throwing in 15 points and grabbing 12 boards.
- At 6’2’’, Karungi is tallest player on the Valpo roster.

Jessi Wiedemann
- One of only two Crusaders to start every game thus far for Coach Dorow.
- Named to Toledo Invite All-Tournament Team after scoring 15 versus Chicago State and 14 against Toledo.
- Double-digit scorer in six of the last eight games for the Crusaders.
- Has made multiple three-pointers in five games in 2013-14.
- Notched a career-high 14 points on 5-of-13 shooting at Tennessee Tech.
- Leads team in blocks (6), three-pointers (14).
- Snapped a season-starting 0-14 slump from behind the arc at #6 Notre Dame, nailing three treys in a nine-point game.
- Played all 40 minutes in the season opener at Saint Louis on Nov. 10th, 2013, and set career highs in blocks (4) and steals (3) while scoring six points.
- Appeared in all 31 games including four starts as a freshman.
- Made collegiate debut versus Indiana.
- Scored 13 points off the bench versus Detroit on Mar. 9th, 2013.