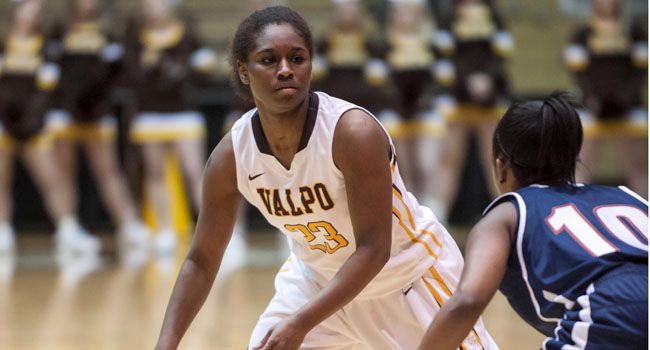 Next Up in Crusader Basketball: The Crusaders look to build off Thursday’s convincing win over Detroit when they welcome Cleveland State to the ARC for a 7:05 pm jump ball. Led by junior Imani Gordon, the Vikings enter Monday’s contest as the top shooting team in the Horizon League. Cleveland State rides into town on a three-game losing skid.

Last Time Out: Valpo bludgeoned Detroit 85-44 last Thursday. Four Crusaders either matched or set career highs in points, steals, rebounds or three-pointers made. The Brown and Gold closed the first half on an impressive 35-2 run as they outperformed the Titans in virtually every statistical category. Abby Dean contributed a career-high 20 points and six steals, Jessica Carr collected seven steals, and Charae Richardson added 16 points on 6-of-7 shooting from the field.

Series Notes: Valpo leads 14-10 over Cleveland State in a series that started in 1989. While the Crusaders do own the overall edge in the series, the Vikings are 8-4 versus the Brown and Gold since 2008 when Valpo joined the Horizon League.

Storylines...
- Monday is the 25th meeting between Cleveland State and Valpo.
- Despite residing in the same conference for 13 years, the two teams have never met in the postseason.
- Monday’s game features three of the Horizon League’s top four three-point shooters (Horton, Green, Schmitt).
- The Crusaders have just one player on their current roster who averaged more than four points per game last season versus the Vikings (Richardson, 5.5 PPG).
- Cleveland State is first in the HL in 3-point FG%; Valpo ranks 9th.
- The Crusaders and Vikings split the 2012-13 season series with each team winning at home.
- Valpo’s win came in a thrilling 92-85 overtime tilt at the ARC. Gina Lange tied the game at 75-all with two seconds in regulation to send it to OT.

Jessica Carr
- Tallied seven steals versus Detroit on Thursday evening.
- Gave out a career-high six assists at UIC last Tuesday night.
- Got back in double figures Saturday for first time in four games.
- Scored 12 points and had four assists in just her second game of the season.
- Made her season debut versus Western Michigan on Dec. 29th, where she scored five points and notched an assist, steal, and rebound.

Abby Dean
- Poured in a career high 20 points and six steals Thursday vs. Detroit.
- Has knocked down five field goals in six different contests.
- Has compiled 10, 11, 12, 13, 14, 15, and 17-point games this season.
- Has started every game for the Crusaders.
- Tallied a then career-high 17 points at Tennessee Tech on Nov. 24th.
- Scored first collegiate points at Cameron Indoor Stadium on 11/23/12.
- Made collegiate debut on November 14th versus Purdue-Calumet.
- Tossed in 11 points in 19 minutes vs.Western Michigan last season.

Charae Richardson
- Has recorded at least one steal in each of the last seven games.
- Has scored 13 or more points in seven contests.
- Scored a career-high 23 points versus Montana State.
- Dished out a season-high seven assists at Tennessee Tech.
- Leads team in points/game (11.1) and total assists (49).
- Scored 15 points in the season opener at Saint Louis on Nov. 10th.
- Played in all 31 games for the Crusaders last season, including 28 starts.
- Carried an 84.1 free-throw percentage.
- Finished second on the team last season in 3-pointers (24) and assists (95).

Sharon Karungi
- Shot a season-best 80% (8-10) from the floor vs. WSU on 1/18/14.
- Scored a career-high 21 points in her first HL game (1/9/14).
- Leading rebounder (7.5) for the Crusaders.
- Averaging 10.1 points per game.
- Grabbed 14 rebounds in both games of the Toledo Invite en route to Most Valuable Player recognition.
- Scored the game-winning put-back with three seconds to play against Toledo.
- Registered 17 points and 14 boards versus FIU for her third double-double of the season.
- Tallied her second double-double at Tennessee Tech, scoring 11 points and collecting 10 rebounds.
- Recorded her first double-double at Illinois on Nov. 12th, throwing in 15 points and grabbing 12 boards.

Jessi Wiedemann
- On a streak of five games where she’s handed out multiple assists.
- Named to Toledo Invite All-Tournament Team after scoring 15 versus Chicago State and 14 against Toledo.
- Double figure scorer in nine games for the Crusaders.
- Has made multiple three-pointers in seven games in 2013-14.
- Snapped a season-starting 0-14 slump from behind the arc at #6 Notre Dame, nailing three treys in a nine-point game.
- Played all 40 minutes in the season opener at Saint Louis and set career highs in blocks (4) and steals (3) while scoring six points.
- Appeared in all 31 games including four starts as a freshman.
- Made collegiate debut versus Indiana.
- Scored 13 points off the bench versus Detroit on Mar. 9th, 2013.