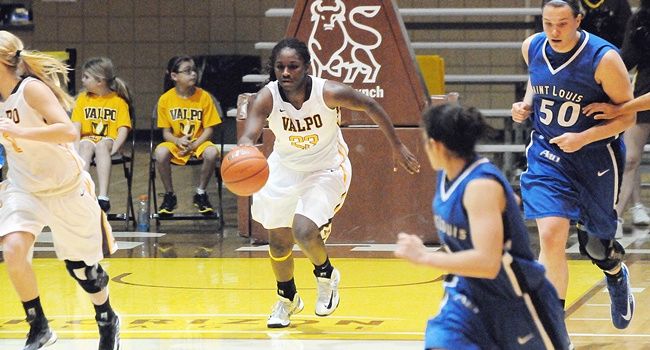 Next Up in Crusader Basketball: Valparaiso plays its final home game of the season Wednesday evening when the Milwaukee Panthers come to town for a 7:05 pm tip. The Crusaders are currently a game back of Detroit and two behind Milwaukee in the standings. The Panthers won a high-scoring affair in Milwaukee last month 85-80 behind Avyanna Young’s career day of 36 points and 10 rebounds.

Last Time Out: Valpo held a lead against Green Bay as late as the 3:00 mark of the second half, but the Phoenix closed with six of the game's final eight points in a nailbiter at the Athletics-Recreation Center. Sharon Karungi tallied her third straight double-double with 16 points and 10 rebounds. Liz Horton and Lexi Miller both finished in double figures as the pair scored ten points each. Horton, Charae Richardson, and Elizabeth Hamlet were all honored prior to the game during Valparaiso’s Senior Day celebration.

Following the Crusaders: Audio - WVUR (95.1 FM, Valparaiso) - Paul Oren (PxP) and Renee Turpa (color) will have the call. Video - Horizon League Network. Links for the audio, video and live stats will be available at ValpoAthletics.com. In addition, ValpoGameday.com is a one-stop shop for live video, stats and social media interaction, all on the same page.

Head Coach Tracey Dorow: Tracey Dorow (15-43) is in her second season at the helm of the Valparaiso women’s basketball program in 2013-14. In her first season, Dorow led the Crusaders to eleven victories overall, including five in Horizon League play. Dorow arrived in Valparaiso after 14 seasons at Ferris State. She compiled a 232-163 record while with the Bulldogs. Furthermore, Ferris State posted the #1 grade point average in all of Division II for the 1999-2000 women’s basketball season as well as the #2 ranking in 2002-2003.

Series Notes: Milwaukee owns a 16-7 edge over Valpo in a series that started in 1983. The Crusaders last win over the Panthers inside the ARC came on February 27th, 2010. Milwaukee owns an 8-3 advantage in games played in Valparaiso including four straight victories.

Storylines...
- Wednesday night’s game will feature four players with free-throw percentages of 80% or higher (Rodriguez, Dean, L. Miller, Horton).
- Saturday’s 53-49 loss to Green Bay was the lowest-scoring game of the season for Valpo.
- Saturday was also the first time the Brown and Gold lost when holding an opponent to under 60 points.
- The Crusaders have yet to win a game this season when they either trail at the half or get outrebounded.

@MKE_WBB
- @MKE_WBB is the only Horizon League team aside from Youngstown State to beat Green Bay this season.
- @MKE_WBB went on a five-game losing streak after their 85-80 defeat of Valpo on February 1st.
- @MKE_WBB has three players averaging 13.0 PPG or better (Rodriguez 17.4, Green 13.6, Young 13.2).
- Rodriguez leads the Horizon League with 154 assists. She’s 26 ahead of Wright State’s Tay’ler Mingo (2nd most).
- Rodriguez also leads the HL in free-throw percentage (89.1%).
- Despite averaging 13.2 points per game, Avyanna Young has made just 61 of her 151 free-throw attempts (40.4%).
- @MKE_WBB is averaging just under 25 three-point attempts per game.
- Kyle Rechlicz is in her second season as head coach of the Panthers.
- Rechlicz graduated from University of Wisconsin where she helped the Badgers to four postseason appearances.

Abby Dean
- Averaged 14.0 PPG in a four-game stretch from 1/21 to 2/1.
- Poured in a career high 20 points and six steals vs. Detroit on 1/23/14.
- Has knocked down exactly five field goals in seven different contests.
- Only Crusader to start every game thus far.
- Tallied a then career-high 17 points at Tennessee Tech on Nov. 24th.
- Scored first collegiate points at Cameron Indoor Stadium on 11/23/12.
- Made collegiate debut on November 14th versus Purdue-Calumet.
- Tossed in 11 points in 19 minutes vs.Western Michigan last season.

Lexi Miller
- Her 83.0% free-throw percentage is second in the Horizon League.
- Has scored 10 points in back-to-back games entering Wednesday.
- Scored 13 points off the bench on 5-of-6 shooting at Green Bay on 2/3.
- Tallied 13 assists to five turnovers during the Toledo Invite.
- Scored a career-high 18 points vs. Tennessee Tech on 11/24/13.
- Accumulated 15 points, four rebounds, four assists, and three steals (all career highs at the time) at Saint Louis on 11/10/13.
- Made collegiate debut against the Indiana Hoosiers 11/9/12.
- Made first start in Hinkle Fieldhouse versus the Butler Bulldogs.
- Scored 13 points in Valpo’s 88-62 victory over UIC on 2/16/13.

Charae Richardson
- Valpo’s leading scorer (11.2 PPG).
- Shooting 52.9% on the season inside the arc.
- Tallied a career-high 23 points versus Montana State.
- Dished out a season-high seven assists at Tennessee Tech.
- Leads team in total assists (86) and steals (36).
- Scored 15 points in the season opener at Saint Louis on Nov. 10th.
- Played in all 31 games for the Crusaders last season, including 28 starts.
- Carried an 84.1 free-throw percentage.
- Finished second on the team last season in 3-pointers (24) and assists (95).

Liz Horton
- Scored ten points Saturday in her return from a back injury (missed three games).
- Made five of six three-point attempts en route to a career-high 20 points at Tulsa on 1/4/14.
- Snapped an eight-game three-point streak at Oakland on 1/15/14.
- Shot 23-of-45 from the field in December including 10-for-19 from behind the arc.
- Leads team in three-point field goal percentage (39.4%)
- Scored exactly 11 points on four different occasions this season (Illinois, #6 Notre Dame, Montana State, Toledo).
- Appeared in 30 games for the Brown and Gold a season ago.
- Named Crusaders’ Most Improved Player in 2012-13.
- Scored 19 points, including 3-for-3 shooting from behind the arc, at Western Michigan on Dec. 19th.

Sharon Karungi
- Secured a career-best 16 rebounds last Saturday vs. Oakland in addition to pouring in 22 points for her first double-double since 12/7.
- Posted a career-high 25 points at Cleveland State on 2/13/14.
- Has finished in double figures in points in each of the last six tilts.
- Shot a season-best 85.7% (12-14) from the floor at CSU on 2/13/14.
- Scored a then career-high 21 points in her first HL game (1/9/14).
- Leading rebounder (7.7) for the Crusaders.
- Grabbed 14 rebounds in both games of the Toledo Invite en route to Most Valuable Player recognition.
- Scored the game-winning put-back with three seconds to play vs. Toledo.
- Registered 17 points and 14 boards versus FIU for her third double-double of the season.
- Tallied her second double-double at Tennessee Tech, scoring 11 points and collecting 10 rebounds.
- Recorded her first double-double at Illinois on Nov. 12th, throwing in 15 points and grabbing 12 boards.

Jessi Wiedemann
- Registered a career-high 21 points vs. Cleveland State on 1/27/14.
- Named to Toledo Invite All-Tournament Team after scoring 15 versus Chicago State and 14 against Toledo.
- Double figure scorer in fifteen games for the Crusaders.
- Has made multiple three-pointers in a dozen games this season.
- Snapped a season-starting 0-14 slump from behind the arc at #6 Notre Dame, nailing three treys in a nine-point game.
- Played all 40 minutes in the season opener at Saint Louis and set career highs in blocks (4) and steals (3) while scoring six points.
- Appeared in all 31 games including four starts as a freshman.
- Made collegiate debut versus Indiana.
- Scored 13 points off the bench versus Detroit on Mar. 9th, 2013.