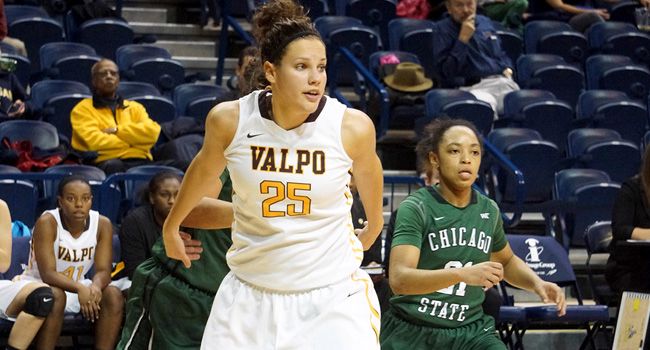 Next Up in Crusader Basketball: Valparaiso wraps up the regular season with a Saturday matinee versus Wright State in Dayton. The Crusaders are looking for their first win inside the Nutter Center since January 27th, 1994. Valpo is currently tied with Detroit for 8th place in the Horizon League standings. If the HL Tournament were to begin today, the Titans would host the #8/#9 game by virtue of their win over Youngstown State on March 1st.

Last Time Out: Charae Richardson poured in a career-high 24 points in what could have been her final game at the ARC Wednesday night in Valpo's 94-80 shootout win over Milwaukee. Karungi added 23 of her own on 11-of-14 shooting from the floor as the duo combined for exactly half of the team’s season watermark in points scored. The Crusaders shot a season-best 56.5% (35-62 FG) from the field in addition to converting on 17 of their 18 attempts from the foul line.

Following the Crusaders: Audio - WVUR (95.1 FM, Valparaiso) - Brandon Vickrey (PxP) will have the call. Video - Horizon League Network. Links for the audio, video and live stats will be available at ValpoAthletics.com. In addition, ValpoGameday.com is a one-stop shop for live video, stats and social media interaction, all on the same page.

Head Coach Tracey Dorow: Tracey Dorow (16-43) is in her second season at the helm of the Valparaiso women’s basketball program in 2013-14. In her first season, Dorow led the Crusaders to eleven victories overall, including five in Horizon League play. Dorow arrived in Valparaiso after 14 seasons at Ferris State. She compiled a 232-163 record while with the Bulldogs. Furthermore, Ferris State posted the #1 grade point average in all of Division II for the 1999-2000 women’s basketball season as well as the #2 ranking in 2002-2003.

Series Notes: Valparaiso leads the all-time series 12-11 over Wright State. The Raiders swept the regular season series last year for only the second time in the history of the rivalry. The Crusaders won eight of the first nine meetings during the 1990’s, but Wright State is 10-4 versus the Brown and Gold since joining the Mid-Con in 2008.

Storylines...
- If the Crusaders beat Wright State and Green Bay wins over Detroit at home on Saturday, Valpo will host Detroit in Monday night’s #8/#9 game.
- The Crusaders possess a 77.4% team free-throw percentage. The best percentage in school history is 75.3% (2008-09).
- As a team, Valpo has shot 50% or better from the floor in five of its last seven games.
- Valpo has yet to win a game this season when it trails at the half.

@WrightStateWBB
- @WrightStateWBB leads the HL (and is 10th nationally) in scoring offense with 83.2 PPG.
- @WrightStateWBB’s +289 turnover margin is the best in the country.
- Only ten teams in the nation commit fewer turnovers per game than @WrightStateWBB (12.3 turnovers/game).
- @WrightStateWBB averages 10.1 steals per game.
- @WrightStateWBB hasn’t lost a game in regulation at the Nutter Center since January 12th (98-82 loss vs. Cleveland State).
- Kim Demmings, Ivory James, and Tay’ler Mingo have each started all 30 games for @WrightStateWBB.
- Mike Bradbury is in his fourth season as head coach of the Raiders.
- Bradbury served as an assistant at Xavier, Cincinnati, VCU, East Tennessee State and Chattanooga before his first head coaching job at Morehead State in 2007.

Abby Dean
- Averaged 14.0 PPG in a four-game stretch from 1/21 to 2/1.
- Poured in a career high 20 points and six steals vs. Detroit on 1/23/14.
- Has knocked down exactly five field goals in seven different contests.
- Tallied a then career-high 17 points at Tennessee Tech on Nov. 24th.
- Scored first collegiate points at Cameron Indoor Stadium on 11/23/12.
- Made collegiate debut on November 14th versus Purdue-Calumet.
- Tossed in 11 points in 19 minutes vs.Western Michigan last season.

Lexi Miller
- Has missed more than one free throw in a game only twice this season.
- Her 83.^% FT percentage is second in the Horizon League.
- Scored 13 points off the bench on 5-of-6 shooting at Green Bay on 2/3.
- Tallied 13 assists to five turnovers during the Toledo Invite.
- Scored a career-high 18 points vs. Tennessee Tech on 11/24/13.
- Accumulated 15 points, four rebounds, four assists, and three steals (all career highs at the time) at Saint Louis on 11/10/13.
- Made collegiate debut against the Indiana Hoosiers 11/9/12.
- Made first start in Hinkle Fieldhouse versus the Butler Bulldogs.
- Scored 13 points in Valpo’s 88-62 victory over UIC on 2/16/13.

Liz Horton
- Has finished in double figures in both games back from a back injury.
- Made five of six three-point attempts en route to a career-high 20 points at Tulsa on 1/4/14.
- Snapped an eight-game three-point streak at Oakland on 1/15/14.
- Shot 23-of-45 from the field in December including 10-for-19 from behind the arc.
- Leads team in three-point field goal percentage (39.4%)
- Has scored exactly 15 points in four of her last seven games.
- Appeared in 30 games for the Brown and Gold a season ago.
- Named Crusaders’ Most Improved Player in 2012-13.
- Scored 19 points, including 3-for-3 shooting from behind the arc, at Western Michigan on Dec. 19th.

Sharon Karungi
- Secured a career-best 16 rebounds last Saturday vs. Oakland in addition to pouring in 22 points for her first double-double since 12/7.
- Posted a career-high 25 points at Cleveland State on 2/13/14.
- Has finished in double figures in points in each of the last seven tilts.
- Shot a season-best 85.7% (12-14) from the floor at CSU on 2/13/14.
- Scored a then career-high 21 points in her first HL game (1/9/14).
- Leading rebounder (7.7) for the Crusaders.
- Grabbed 14 rebounds in both games of the Toledo Invite en route to Most Valuable Player recognition.
- Scored the game-winning put-back with three seconds to play vs. Toledo.
- Registered 17 points and 14 boards versus FIU for her third double-double of the season.
- Tallied her second double-double at Tennessee Tech, scoring 11 points and collecting 10 rebounds.
- Recorded her first double-double at Illinois on Nov. 12th, throwing in 15 points and grabbing 12 boards.

Jessi Wiedemann
- Registered a career-high 21 points vs. Cleveland State on 1/27/14.
- Named to Toledo Invite All-Tournament Team after scoring 15 versus Chicago State and 14 against Toledo.
- Double figure scorer in fifteen games for the Crusaders.
- Has made multiple three-pointers in 13 games this season.
- Snapped a season-starting 0-14 slump from behind the arc at #6 Notre Dame, nailing three treys in a nine-point game.
- Played all 40 minutes in the season opener at Saint Louis and set career highs in blocks (4) and steals (3) while scoring six points.
- Appeared in all 31 games including four starts as a freshman.
- Made collegiate debut versus Indiana.
- Scored 13 points off the bench versus Detroit on Mar. 9th, 2013.