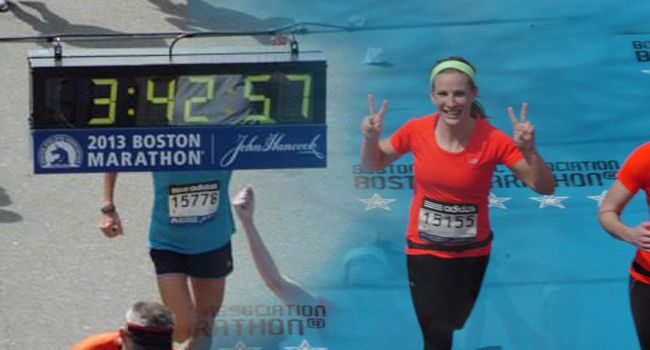 Loosvelt and fellow racer Erin Miller look out over the finish line on Boylston Street in Boston, one day after the bombings.

It's 6:00 a.m. and Katie Loosvelt's phone begins to belt out Bruce Springsteen's "Born to Run." The snow may be calf-deep, but a 16-mile run sits at the top of her to-do list on yet another blustery March morning in Valparaiso.

Before The Boss makes it to the second verse, Loosvelt is bundled in layers, poised to tackle the next step in her training for the Bayshore Marathon in May.

The 2014 Bayshore Marathon through Traverse City, Michigan is expected to be much more low-key than her last 26.2-mile expedition, the 2013 Boston Marathon.

What began as a sublime morning on Beantown's biggest civic holiday of the year concluded in tragedy and panic. A little while after Lelisa Desisa Benti completed the race, a pair of pressure-cooker bombs detonated near the finish line. The sights and sounds remain hauntingly fresh in the mind of those present. The uneasiness lingers in the memory of those fixated on their televisions, hoping - praying - that both runners and the Bostonians who live nearby were safe.

For Loosvelt, Boston was her third full marathon. "Born to Run" couldn't be a more fitting wake-up tune for a young woman whose first organized race was a full marathon. Most runners graduate to a full after a 5K, and 10K, or even a half-marathon. She embraced the baptism by fire by finishing the 2011 New Jersey Marathon in 3:47.41.

Like the majority of the long-distance running community, Loosvelt considers the Boston Marathon to be the Super Bowl of all races. Due to its downhill terrain, Boston represents one of the most demanding marathon courses in the nation. For those of us who feel 26.2 miles is best traveled by plane, train, or automobile, a downhill track would seem ideal for running, perhaps enjoyable. But the toll it takes on one's legs is actually inflated.

So when her and longtime friend, Erin Miller, crossed the line at 3 hours and 35 minutes, the feeling on Boylston Street was pure jubilation.

"It's almost impossible to describe the moment when we finished. I've never experienced an emotional high like that ever in my life," Loosvelt said.

Loosvelt and Miller loitered around the finish line for a few minutes afterwards, letting it all sink in, and cheering on fellow racers. The two eventually made their way back to their hotel for a beer inside the bar, a common post-race tradition.

The mood was merry as the two watched live coverage of the event from the Boston Park Plaza.

And then the first bomb went off.

Loosvelt heard it loud and clear. At first she was confused as to why there were fireworks so late in the race.

She knew something was up.

"People in the lobby starting talking and were saying it was explosives and not fireworks. Immediately, we thought we were under attack," Loosvelt said.

A cousin of Miller's who works in Boston called to say she was leaving the city because there were reports that bombs were going off in the subway. A fire at a local library only added to the chaos.

In a matter of minutes, a postcard day on Boylston Street conjured grim flashbacks to New York City in September of 2001.

Pandemonium swept through downtown. Like any terrorist attack, the fear of the unknown is horrifying. Only those responsible know the depth and scope of the carnage.

Imagine for a moment the physical, mental, and emotional roller coaster one rides on the day of a marathon. Now imagine being thrust into the middle of a terrorist attack.

"It was such an odd feeling. I was in an incredible euphoric state of mind so I could not get my brain to process the panic," Loosvelt recalls.

Immediately, the Boston Park Plaza - and much of the city - transformed into a military zone. Police and hotel employees began to tell guests they were not allowed to leave.

"I had never seen a tank or a machine gun before, and then I looked out the window of my hotel and there was a tank on Boylston Street and about 40 machine guns. It looked like a war broke out in the downtown of a major city," Loosvelt remembers.

Survival instincts kicked in. Loosvelt and Miller provided what little they could to those who took shelter in the lobby: a helping hand, words of support, a cell phone for those to call concerned family members and friends.

Loosvelt herself had more than 40 missed calls and over 80 text messages. At that point, it became apparent. She was in the midst of our country's latest terrorist attack, with no guarantee of safety.

The days that followed the Boston Marathon created a captivating hide-and-seek plotline that Scorsese couldn't produce. The grainy images of Dzhokhar and Tamerlan Tsarnaev were plastered on every newspaper, television, and post office in the country. The manhunt went on for three days before the brothers engaged in firefight with police in suburban Watertown. Tamerlan took a flurry of bullets and subsequently served as a speed bump as Dzhokhar fled the scene in a hijacked automobile. Dzhokhar was found a day later hiding in a covered boat in a backyard of a residential area. He was taken into custody and is awaiting trial on a laundry list of federal charges.

It was about that time that Loosvelt was able to reflect on it all.

She recalls the complete exhaustion felt after making it through Heartbreak Hill. Heartbreak Hill is situated between miles 20 and 21 and greets runners with a steady ascent, a wicked departure from the course's downward tilt. The agony became unavoidable.

"As hard as I trained and as big of a stage as the Boston Marathon is, I wanted to give up so badly. I've never experienced that kind of pain. I thought my quads were going to tear." Loosvelt said, with a little less than five miles to go. "I was so close to telling Erin to go on. But something in me just kept going."

The arithmetic doesn't lie: had she walked the final five miles, she most likely would've crossed the finish line in the path of the destruction.

"Every split-second decision can literally be life or death. I never thought I would learn that running a race," she remarked.

Loosvelt admits to thinking back on Boston frequently. She mourns the three who lost their lives. She laments the hundreds injured and maimed. She counts her blessings on one hand but on the other concedes - albeit selfishly by her own admission - that a bit of anger still resides within her. What was to be one of the more rewarding days of her life spiraled into the most catastrophic.

Loosvelt hopes to get back to Boston one day. She has her sights set on the 2015 Boston Marathon.

"It's every runner's dream to qualify and run in the Boston Marathon. I feel like part of my dream was taken away that day. I want to make that final turn down Boylston and get those goosebumps again. And this time I want that joy to last."