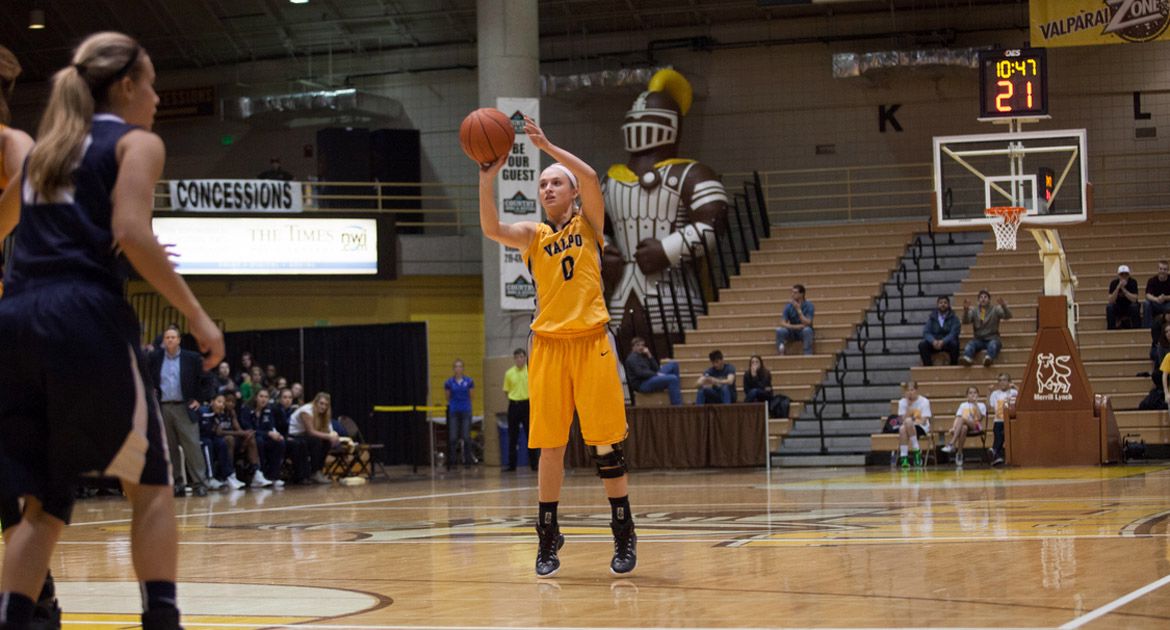 Next Up in Crusader Basketball: Valparaiso takes to the road for the first time Tuesday night when it squares off against Indiana. The Hoosiers waxed Gardner-Webb, 115-54, in their season opener Saturday at Assembly Hall. Indiana set program records for points in a game, three-pointers in a game (16), and the 61-point margin of victory was the second-highest in school history. Tuesday represents the Crusaders’ first trip to Bloomington since Nov. 15th, 2006.

Last Time Out: Powered by 46 bench points, the Crusaders throttled Butler 91-57 at the ARC Friday night. Five players finished in double figures, including Abby Dean who registered a career-high 21 points on 9-of-11 shooting. Freshman Dani Franklin dazzled in her Valparaiso debut as the Cedar Rapids, Iowa native tossed in 14 points (6-11 FG) in 16 minutes of action.

Following the Crusaders: Audio - Valpo Sports Radio Network (WVUR, 95.1 FM, Valparaiso) - Brandon Vickrey (PxP), Tommy Mantice (Color)
Links for the audio, as well as live stats, will be available at ValpoAthletics.com. In addition, ValpoGameday.com is a one-stop shop for live video, stats and social media interaction, all on the same page.

Head Coach Tracey Dorow: Tracey Dorow (18-45) is in her third season at the helm of the Valparaiso women’s basketball program in 2014-15. She collected her 250th career victory on Friday, Nov. 14th after a 91-57 walloping of Butler. In her first season, Dorow led the Crusaders to eleven victories overall, including five in Horizon League play. Dorow arrived in Valparaiso after 14 seasons at Ferris State. She compiled a 232-163 record while with the Bulldogs. Furthermore, Ferris State posted the #1 grade point average in all of Division II for the 1999-2000 women’s basketball season as well as the #2 ranking in 2002-2003.

Series Notes: Indiana leads the all-time series 6-2. The Crusaders have never won inside Assembly Hall in five attempts. Tracey Dorow won her first game as Valparaiso’s head coach in a 64-52 contest over the Hoosiers at the ARC to open the 2012-13 season. Six of the tilts in the eight-game series were played before 2006, including a January 20th, 1972 matchup in Bloomington that represents Valpo’s first single-game record in its current archives.

@ValpoWBB...
...looking back at last season
- @ValpoWBB.wrapped up 2013-14 with three wins at the Athletics-Recreation Center.
- @ValpoWBB were champions of the Toledo Invite, defeating Chicago State and the host Rockets.
- @ValpoWBB’s Liz Horton signed a contract to play professionally with Germany’s TG Neuss following a senior season where she averaged 10.9 points/game and recorded the 9th-highest three-point field goal percentage in a season in school history (39.8%).
- @ValpoWBB shot 77.6% from the free-throw line, the highest percentage ever by a Crusader team.

@IndianaWBB
- @IndianaWBB finished 2013-14 with a 21-13 overall record, but just a 5-11 mark in the Big Ten.
- @IndianaWBB’s Larryn Brooks became the first freshman in school history to score over 500 points in a single season.
- @IndianaWBB’s Brooks set program freshman records for points scored, 3-pointers made, assists, and free-throws made in 2013-14.
- @IndianaWBB welcomes first-year head coach Teri Moren. Moren had served as Indiana State’s head coach from 2010-2014.
- Indiana University Athletics received a $40 million gift in December of 2013 to provide renovations to historic Assembly Hall.

Dani Franklin
- Scored 14 points on 6-of-11 shooting in her first game with the Brown and Gold Friday.

Lexi Miller
- One of two Crusaders to finish with more assists (59) than turnovers (56) last season.
- Made collegiate debut against the Indiana Hoosiers Nov, 9th, 2012.

Jasmyn Walker
- Made the start versus Butler for her collegiate debut.
- Tossed in four points and snagged six boards vs. Butler on Friday.

Jessi Wiedemann
- Has appeared in all 63 games since arriving to Valparaiso.
- Canned multiple three-pointers in 13 games last season.
- Made collegiate debut versus Indiana
- Registered a career-high 21 points vs. Cleveland State on 1/27/14.