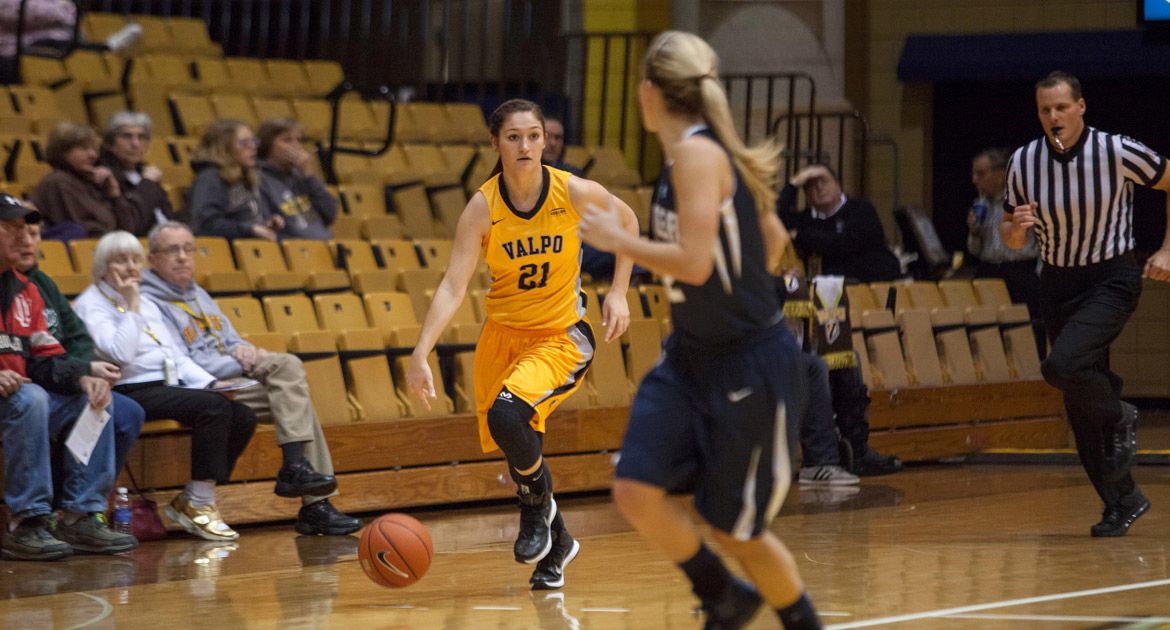 Lexi Miller (Caledonia, Mich./Caledonia) supplied the scoring, Jasmyn Walker (Muskegon, Mich./Mona Shores) provided the rebounding, and Dani Franklin (Cedar Rapids, Iowa/George Washington) did both as Valparaiso collected its first road win of the season with a 65-50 defeat of Northern Illinois at the Convocation Center in DeKalb on Thursday night.

A dominating first half that featured a 22-2 Valparaiso run gave the Crusaders a considerable cushion, one that was valuable during a sluggish final period.

Miller and Franklin both reached double figures before the halftime horn. The Brown and Gold assembled a near flawless twenty minutes on both ends of the court. Miller scored the first six Valpo points via the three-ball. The junior found the bottom of the net on each of her first three attempts from beyond the arc.

NIU's Ally Lehman hit a jumper at the 15:44 mark to bring it to a 6-4 game. Valpo's persistent defense forced the Huskies to miss on their next 16 field goal attempts. Meanwhile, on the offensive end, the Brown and Gold benefitted from superb shooting from a number of sources. Miller, Franklin, Walker, and Jessica Carr (Arcadia, Ind./Hamilton Heights) all registered multiple field goals. Both Walker and Franklin notched eight rebounds in the first half.

Huskie forward Kelly Smith knocked down a free-throw with 6:51 on the clock to snap an eight-minute NIU scoring drought. The Huskies went just under twelve minutes without a field goal.

Northern Illinois' shooting progressed to the mean following the break. Lehman single-handedly led the NIU charge that brought the Huskies one score away from trimming the margin to single digits. She scored 18 of her game-high 22 points in the final frame.

Though the Huskies outscored the Crusaders in the second half, Valpo's rabid first twenty minutes deemed a comeback insurmountable.

Valparaiso enjoyed a stellar night of shooting from three-point range. The Crusaders posted a 61.1% (11-for-18) mark from beyond the arc. Conversely, NIU made just one triple on 13 attempts. Valpo also handily won the battle of the boards, 50-28.

Miller paced the Valpo scoring ambush with 17 points on 4-of-7 shooting (4-5 three-pointers) and a 5-of-6 night from the line. Franklin continued to cement her status as an immediate impact player as she tossed in 13 points and gathered 12 rebounds for her first career double-double. Walker was a free-throw away from matching Franklin's double-double. The freshman corralled 14 boards and chipped in nine points.

All nine players that saw the court for Valpo recorded a field goal.

The Crusaders (2-1) conclude a busy week on Saturday evening with a home game versus Tennessee Tech (1-1). Tip-off is slated for 7:05 pm inside the Athletics-Recreation Center. Links to the audio, video, and live stats are available at ValpoAthletics.com.