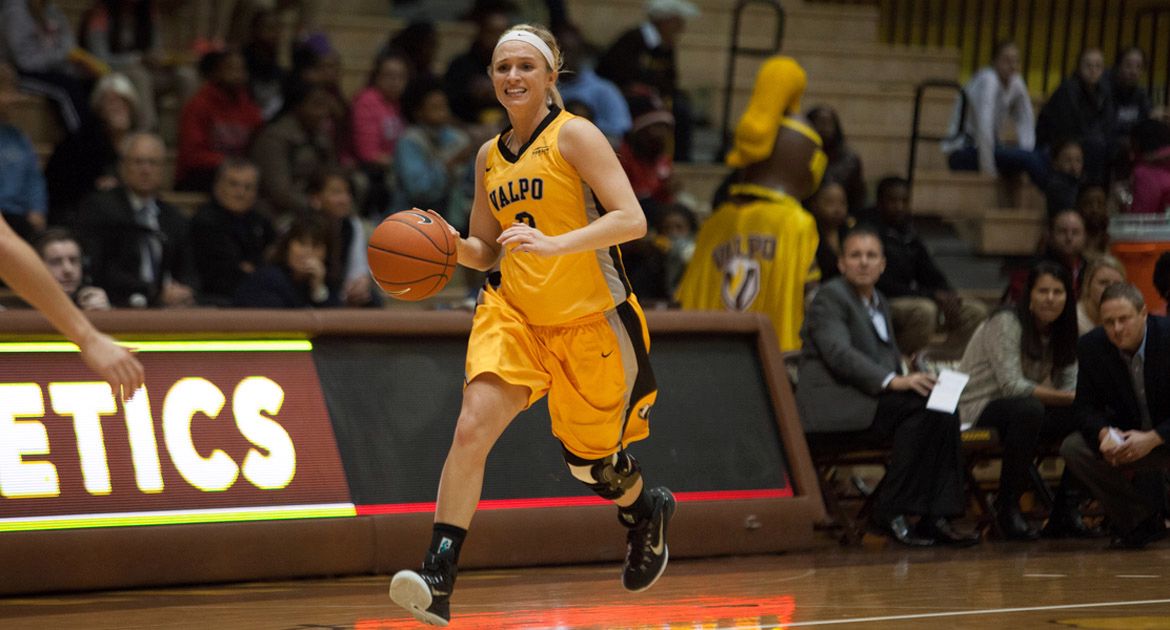 Next Up in Crusader Basketball: Valparaiso takes to the court for the third time in five days as its welcomes Tennessee Tech to the ARC for a Saturday night tilt. The Crusaders and Golden Eagles met last November for the first time in history. Valpo is currently in a stretch where it plays one home game a week for five weeks.

Last Time Out: The Crusaders shot over 55% from the floor in the first twenty minutes as they erupted for a 40-13 halftime lead over Northern Illinois. Valpo set it on cruise in the closing period as the Brown and Gold collected a 65-50 victory over the Huskies in DeKalb. Freshman Dani Franklin notched her first career double-double with 13 points and 12 rebounds. Junior Lexi Miller was 4-for-5 from behind the arc as her 17 points led Valparaiso. Freshman Jasmyn Walker was a beast on the boards as the rookie gathered 14 rebounds.

Head Coach Tracey Dorow: Tracey Dorow (19-46) is in her third season at the helm of the Valparaiso women’s basketball program in 2014-15. She collected her 250th career victory on Friday, Nov. 14th after a 91-57 walloping of Butler. In her first season, Dorow led the Crusaders to eleven victories overall, including five in Horizon League play. Dorow arrived in Valparaiso after 14 seasons at Ferris State. She compiled a 232-163 record while with the Bulldogs. Furthermore, Ferris State posted the #1 grade point average in all of Division II for the 1999-2000 women’s basketball season as well as the #2 ranking in 2002-2003.

Series Notes: Last season’s meeting in Cookeville was the first between these two teams. The Golden Eagles used a 10-0 run over the final 2:08 to overcome Valpo 84-78 at the Eblen Center. Tennesssee Tech’s bench outscored Valpo’s 16-2. Furthermore, the Golden Eagles enjoyed a 43-30 rebounding edge.

Storylines...
- Valparaiso can notch its third win of the season Saturday. The Crusaders didn’t win their third game of 2013-14 until Jan. 23rd.
- The Brown and Gold are in search of a 3-1 start for the first time in five seasons (2009-10).
- Tennessee Tech junior Hannah Goolsby recorded a career-high 21 points in last season’s 84-78 victory over Valpo.
- TTU head coach Jim Davis was the head coach at Clemson for 18 seasons.
- In 16 games versus current Horizon League opponents, the Golden Eagles are 15-1.

@ValpoWBB...
...looking back at last season
- @ValpoWBB were champions of the Toledo Invite, defeating Chicago State and the host Rockets.
- @ValpoWBB’s Liz Horton signed a contract to play professionally with Germany’s TG Neuss following a senior season where she averaged 10.9 points/game and recorded the 9th-highest three-point field goal percentage in a season in school history (39.8%).
- @ValpoWBB shot 77.6% from the free-throw line, the highest percentage ever by a Crusader team.
...looking ahead to this season
- @ValpoWBB was picked to finish eighth in the Horizon League in the 2014-15 Preseason Poll.
- @ValpoWBB returns 1,287 points, 732 rebounds, 244 assists, 4,132 minutes played from 2013-14.

Lexi Miller
- One of two Crusaders to finish with more assists (59) than turnovers (56) last season.
- Finished a point shy of her career-high Thursday as she guided Valpo with 17 points on 4-of-5 shooting from three-point range.

Dani Franklin
- Scored 14 points on 6-of-11 shooting in her first game with the Brown and Gold on Nov. 14th.
- Recorded her first career double-double Thursday (13 pts., 12 rebs) at NIU.
- Has finished in double figures in each of Valpo’s first three games.

Jasmyn Walker
- Made the start versus Butler for her collegiate debut.
- Ripped down 14 rebounds to go with nine points at NIU Thursday.

Jessi Wiedemann
- Has appeared in all 64 games since arriving to Valparaiso.
- Canned multiple three-pointers in 13 games last season.
- Registered a career-high 21 points vs. Cleveland State on 1/27/14.