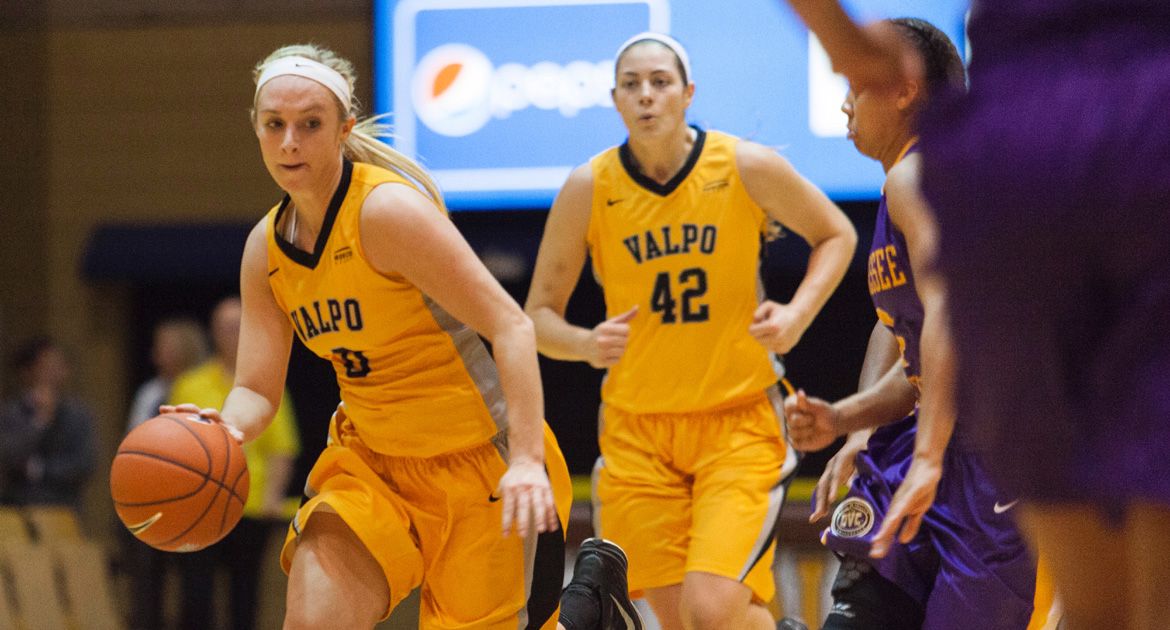 Jessica Carr and Haylee Thompson seek to give the 12th-ranked Louisville Cardinals their first loss of the 2014-15 season Sunday afternoon at the ARC. (Yahya Alqahtani)
Louisville at Valparaiso | November 30, 2014
Related Links
Related Links

Next Up in Crusader Basketball: Valparaiso hosts a ranked opponent for the first time in nearly three years Sunday when the 12th-ranked Louisville Cardinals fly into town for a matinee. Louisville is coming off a 2013-14 campaign that yielded a 33-win season highlighted by an Elite Eight appearance. The Cardinals lost three starters from that star-studded squad, but they haven’t missed a beat as a handful of high-end freshmen complement an experienced roster.

Last Time Out: The Crusaders shot just 20-of-70 (28.6%) from the field in a 100-65 loss at Akron on Tuesday. Freshman Dani Franklin amended her season-high in points as she finished with 16 to go with eight rebounds. However, the Zips’ combination of Sina King (19 points, 17 rebounds) and Anita Brown (21 points on 10-of-12 shooting) helped spur a 59-point second half for the home team.

Head Coach Tracey Dorow: Tracey Dorow (20-47) is in her third season at the helm of the Valparaiso women’s basketball program in 2014-15. She collected her 250th career victory on Friday, Nov. 14th after a 91-57 walloping of Butler. In her first season, Dorow led the Crusaders to eleven victories overall, including five in Horizon League play. Dorow arrived in Valparaiso after 14 seasons at Ferris State. She compiled a 232-163 record while with the Bulldogs. Furthermore, Ferris State posted the #1 grade point average in all of Division II for the 1999-2000 women’s basketball season as well as the #2 ranking in 2002-2003.

Series Notes: Valparaiso and Louisville met for the first time in history two seasons ago at the KFC Yum! Center in Kentucky. The Cardinals won a 96-40 contest on December 8th, 2012.

Storylines...
- The Crusaders have never allowed 100 points or more to a ranked team on their home court.
- The Cardinals reached triple digits for the first time in their last game (102 vs. Lafayette).
- Of the 13 players on Louisville’s roster, eight are 6’1’’ or taller.
- Louisville is the first team from the state of Kentucky to play Valpo at the Athletics-Recreation Center.
- Notre Dame’s 2008-09 squad was the last team to visit the ARC with a higher national ranking than Louisville. The Irish were #8.

Jessica Carr
- Collected her 200th career assist at Akron this past Tuesday.
- Recorded game highs in points (16) and assists (6) to lead Valpo to a 79-61 win versus Tennessee Tech..
- Drained a career-high six three-pointers in Valpo’s season finale at Green Bay.

Annemarie Hamlet
- Scored 11 points in her Crusader debut last Friday.
- Has knocked down at least one triple in each of the first five tilts.

Lexi Miller
- Owns the fifth-best turnover ratio in the Horizon League (2.1).
- Finished a point shy of her career-high last Thursday as she guided Valpo with 17 points on 4-of-5 shooting from three-point range.

Jasmyn Walker
- Has started all five games to open her Crusader career.
- Ripped down 14 rebounds to go with nine points at NIU last Thursday.

Jessi Wiedemann
- Has appeared in all 67 games since arriving to Valparaiso.
- Canned multiple three-pointers in 13 games last season.
- Registered a career-high 21 points vs. Cleveland State on 1/27/14.