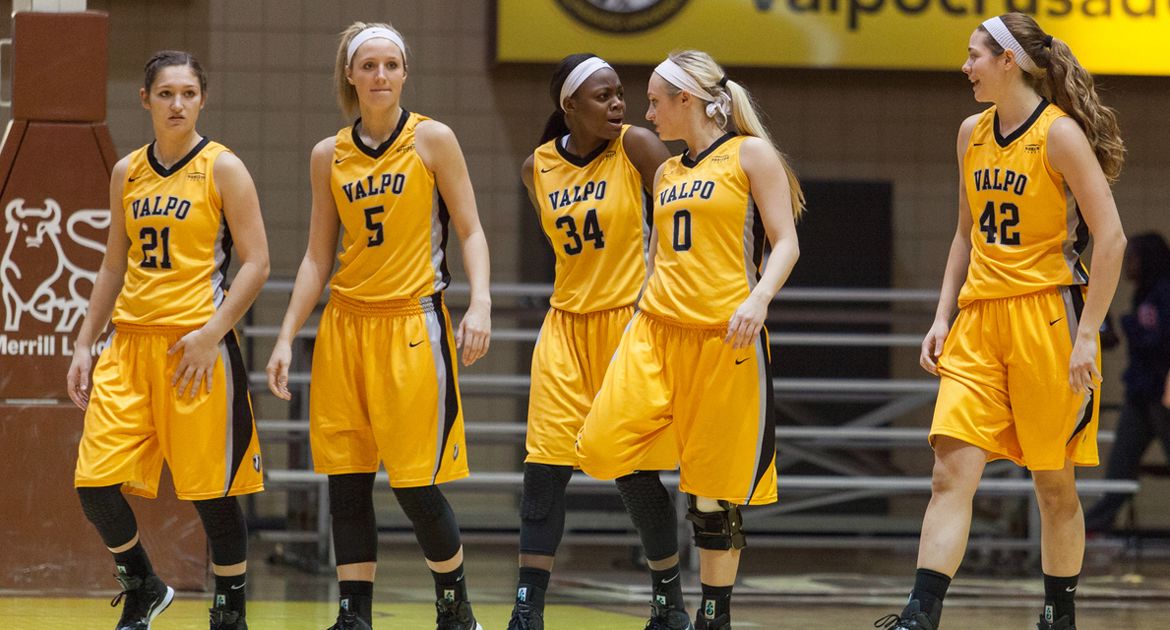 Next Up in Crusader Basketball: The Crusaders play their final home game before Christmas this weekend as Illinois stops by the ARC for a Saturday matinee. With many familiar faces from a season ago, the Fighting Illini are off to a solid start in 2014-15 with seven wins in their first ten tilts. Valpo aims to jump back over the .500 mark at home versus its second Big Ten opponent in a month.

Last Time Out: A 10-0 game-opening run helped spark the Coyotes to an 81-62 victory over the Crusaders at the DakotaDome on Tuesday. Freshman Dani Franklin led all scorers with 18 points (a new career-high) while Lexi Miller recorded all ten of her points in the second half. Jasmyn Walker and Haylee Thompson each pitched in eight points, but Valpo was outrebounded 56-32. Nicole Seekamp’s 16 points helped enable the Coyotes’ to a wire-to-wire win.

Head Coach Tracey Dorow: Tracey Dorow (20-51) is in her third season at the helm of the Valparaiso women’s basketball program in 2014-15. She collected her 250th career victory on November 14th, 2014 after a 91-57 walloping of Butler. In her first season, Dorow led the Crusaders to eleven victories overall, including five in Horizon League play. Dorow arrived in Valparaiso after 14 seasons at Ferris State. She compiled a 232-163 record while with the Bulldogs. Furthermore, Ferris State posted the #1 grade point average in all of Division II for the 1999-2000 women’s basketball season as well as the #2 ranking in 2002-03.

Series Notes: Valpo and Illinois have met just twice with the Fighting Illini winners of both contests. The Fighting Illini defeated the Crusaders 87-59 last year in Champaign. The other meeting was on December 21st, 1998, a 79-51 Illinois win at Assembly Hall. Saturday is the team’s first trip to Valparaiso.

Storylines...
- Only one of Valpo’s nine games thus far has been decided by fewer than 15 points.
- Illinois’ Ashley McConnell and Valpo’s Jessi Wiedemann were high school teammates at Fremd (Palatine, Ill).
- The Fighting Illini is one of two Big Ten teams on Valpo’s non-conference schedule this season (Indiana, Nov. 18).
- The Crusaders have allowed over 80 points in their last five games.
- Illinois assistant coach Tianna Kirkland played for Tracey Dorow at Ferris State. Kirkland was the only Great Lakes Intercollegiate Athletic Conference (GLIAC) Player of the Year for the Bulldogs.

Jessica Carr
- Distributed a career-high eight assists versus Tulsa on Dec. 6th.
- Collected her 200th career assist at Akron on Nov. 25th.
- Recorded game highs in points (16) and assists (6) to lead Valpo to a 79-61 win versus Tennessee Tech on Nov. 22nd.

Annemarie Hamlet
- Scored 11 points in her Crusader debut vs. Butler on Nov. 14th.
- Averages 21.6 minutes off the bench for Valpo.

Georgi Donchetz
- Made her collegiate debut Wednesday and knocked down her first - and only - three-point attempt.

Anne Hamilton
- Saw a season-high 20 minutes Wednesday at South Dakota.
- Was a perfect 2-for-2 from the field vs. Butler in her Crusader debut.

Lexi Miller
- Owns the team’s best assist-to-turnover ratio (1.3).
- Finished a point shy of her career-high at NIU as she guided Valpo with 17 points on 4-of-5 shooting from three-point range.

Jasmyn Walker
- Valpo’s leading rebounder (6.8 RPG) and shot blocker (5).
- Has started all nine games to open her Crusader career.
- Ripped down 14 rebounds to go with nine points at NIU.