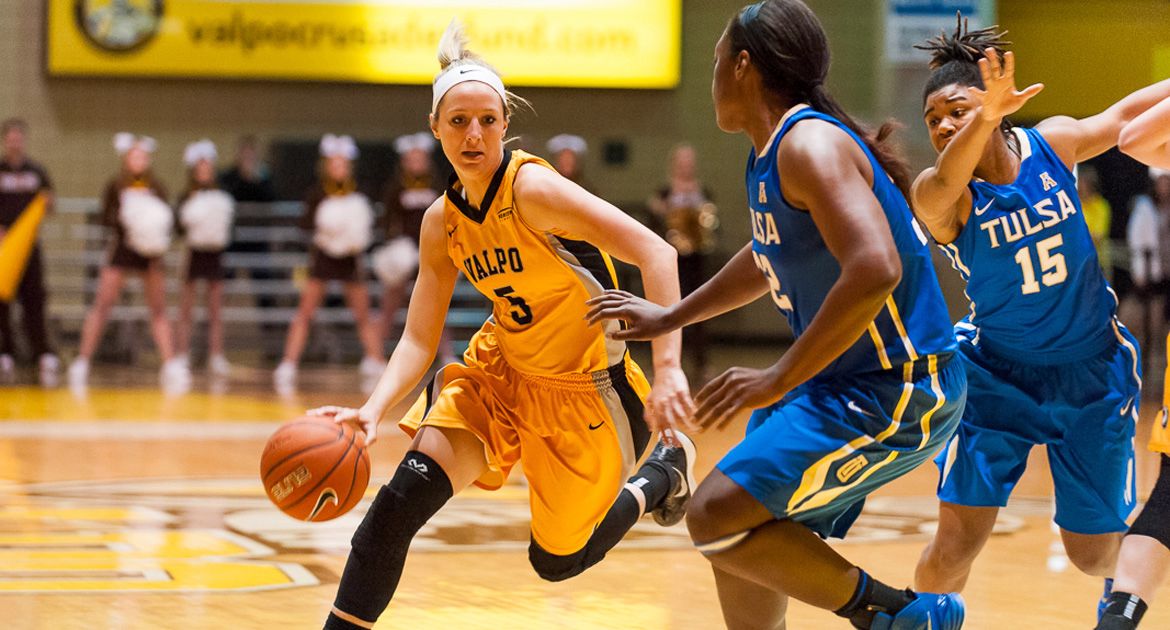 Next Up in Crusader Basketball: Valparaiso aims to duplicate its regular season start when Horizon League play opens Thursday evening in Cleveland. The Crusaders raced out to a 3-1 record through their first four games of November, but enter conference action at 4-9 overall. Thursday’s meeting represents the third of five trips to the state of Ohio for Valpo in 2014-15.

Last Time Out: Haylee Thompson constructed her second double-double (11 points, 11 rebounds) in as many games, but Stetson assembled a 17-2 second half run en route to a 73-62 win over the Crusaders at the Athletics-Recreation Center on Saturday afternoon. The Hatters were powered by Indiana native Jama Sharp, who reached 1,000 career points as part of her 17-point day. Freshman Jasmyn Walker fueled the Crusaders with 16 points and eight rebounds.

Head Coach Tracey Dorow: Tracey Dorow (21-54) is in her third season at the helm of the Valparaiso women’s basketball program in 2014-15. She collected her 250th career victory on November 14th, 2014 after a 91-57 walloping of Butler. In her first season, Dorow led the Crusaders to eleven victories overall, including five in Horizon League play. Dorow arrived in Valparaiso after 14 seasons at Ferris State. She compiled a 232-163 record while with the Bulldogs. Furthermore, Ferris State posted the #1 grade point average in all of Division II for the 1999-2000 women’s basketball season as well as the #2 ranking in 2002-03.

Series Notes: Valparaiso owns a 14-12 advantage all-time over Cleveland State in a series that began in January of 1989. The Vikings have won three consecutive contests over the Brown and Gold. Despite CSU’s 82-74 victory over the Crusaders last season at the Wolstein Center, Valpo is 9-4 all-time versus the Vikings away from the Athletics-Recreation Center.

Storylines...
- The Vikings are 43.3% field-goal shooters. Their opponents have shot 43.2% from the field.
- Ten of Cleveland State’s 13 games have been decided by ten points or fewer. All of Valpo’s 13 tilts have been 11-point-or-greater affairs.
- The Crusaders have dropped six consecutive Horizon League road openers. They’ve been held to 55 points or fewer in five of those.

Abby Dean
- Finished in double figures (14) for the first time in eight games last Tuesday versus Purdue-Calumet.
- Registered a career-high 21 points on 9-of-11 shooting vs. Butler on Nov. 14th.

Anne Hamilton
- Has averaged 11.3 PPG in her last three games and has been perfect from the free-throw line during that span.
- Nailed four treys as part of a 16-point first half at SIU-Edwardsville on Dec. 20th.

Haylee Thompson
- Has clinched a double-double in back-to-back games for Valpo.
- Set season highs in points (15) and rebounds (11) vs. Purdue-Calumet.