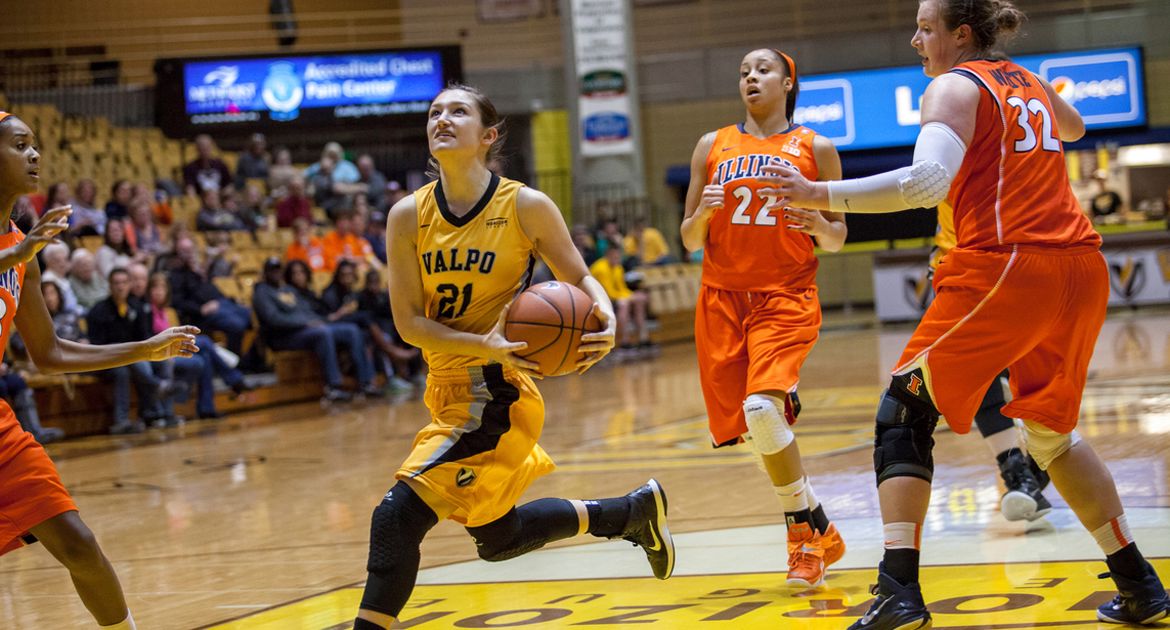 Next Up in Crusader Basketball: Valparaiso hosts its first Horizon League contest of the 2014-15 slate when HL Player of the Year candidate Ruvanna Campbell (16.9 PPG, 12.9 RPG) and the UIC Flames visit the Athletics-Recreation Center Saturday afternoon. The Crusaders and Flames will be meeting for the 42nd time in the history of the series.

Last Time Out: The Crusaders led Cleveland State for 24 minutes Thursday night, but a 38-point second half propelled the Vikings to a 69-62 victory at the Wolstein Center. Freshman Jasmyn Walker earned her first double-double as the forward accumulated 18 points (7-of-11 FG) and 10 rebounds. Lexi Miller pitched in 12 points off the bench while Valpo shot a collective 7-12 (58.3%) from three-point range, but Cori Coleman and Imani Gordon each recorded a game-high 19 points. CSU outscored the Crusaders 18-5 from the foul line.

Head Coach Tracey Dorow: Tracey Dorow (21-55) is in her third season at the helm of the Valparaiso women’s basketball program in 2014-15. She collected her 250th career victory on November 14th, 2014 after a 91-57 walloping of Butler. In her first season, Dorow led the Crusaders to eleven victories overall, including five in Horizon League play. Dorow arrived in Valparaiso after 14 seasons at Ferris State. She compiled a 232-163 record while with the Bulldogs. Furthermore, Ferris State posted the #1 grade point average in all of Division II for the 1999-2000 women’s basketball season as well as the #2 ranking in 2002-03.

Series Notes: Valparaiso owns a 21-20 advantage all-time over UIC in a series that started on December 4th, 1980. The Flames have won nine of the last 12 contests after snapping a seven-game losing streak to the Brown and Gold in February of 2009. The Crusaders are 13-6 at home versus the Flames.

Storylines...
- The Flames enter Saturday’s game averaging 12.6 steals per game, the 7th-highest rate in the nation. Valpo averages 3.9/tilt (343rd).
- UIC is last in the Horizon League in three-pointers made (45). The second-to-last team - Green Bay - has 93.
- The Flames have held their opponents to under 30 points twice in the last three games (Robert Morris Springfield, Loyola Chicago).

Abby Dean
- Finished in double figures (14) for the first time in eight games last Tuesday versus Purdue-Calumet.
- Registered a career-high 21 points on 9-of-11 shooting vs. Butler on Nov. 14th.

Anne Hamilton
- Has not missed a free-throw since December 3rd (8 for last 8).
- Nailed four treys as part of a 16-point first half at SIU-Edwardsville on Dec. 20th.

Lexi Miller
- One of two Crusaders to have more assists (31) than turnovers (22).
- Finished a point shy of her career-high at NIU (Nov. 20) as she guided Valpo with 17 points on 4-of-5 shooting from three-point range.

Jasmyn Walker
- Leads team in rebounding (6.9 RPG), blocks, (9) and steals (11).
- Named Horizon League Freshman of the Week on Monday.
- Has started all 13 games to open her Crusader career.

Haylee Thompson
- Has scored in double figures each of the last three games.
- Set season highs in points (15) and rebounds (11) vs. Purdue-Calumet.