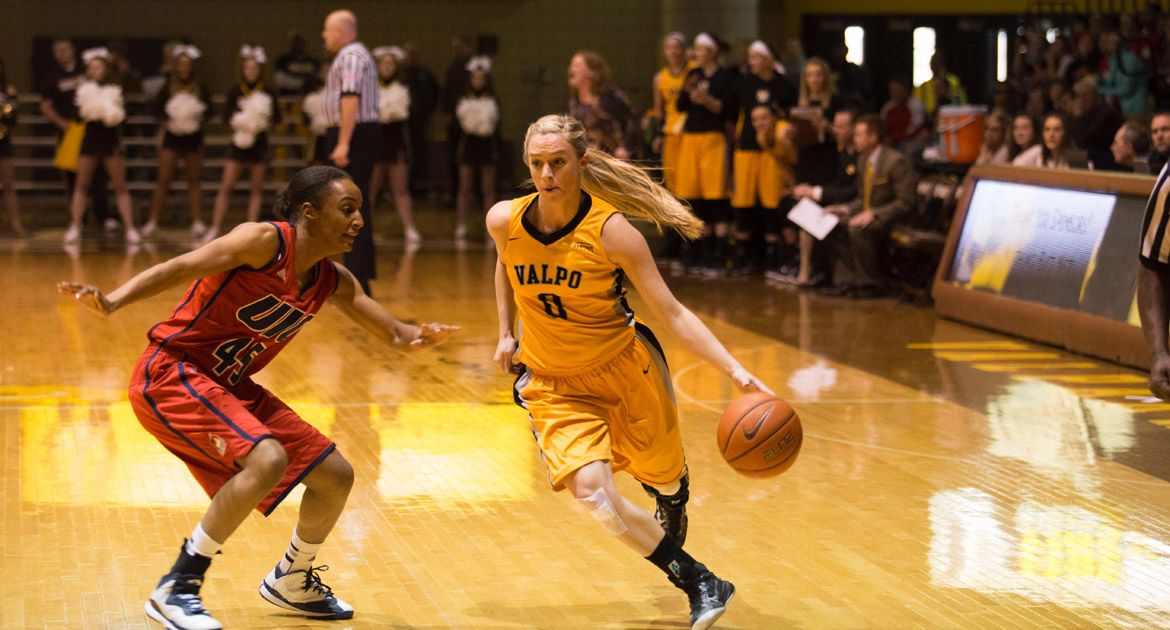 Freshman Jasmyn Walker (Muskegon, Mich./Mona Shores) starred again for the Crusaders to the tune of 19 points. Walker knocked down 6-of-10 attempts from the field and seven of her nine shots from the foul line.

The first ten minutes of the opening period were a defensive stalemate. The Flames clung to a 10-9 lead at the second media timeout.

Annemarie Hamlet (McBain, Mich./McBain [Oakland]) sunk a triple at the 9:19 mark to draw Valpo to within 18-14. The Crusaders managed just one field goal the rest of the half while the visitors rattled off a 17-4 half-closing run. Hamlet ended the afternoon with 10 points.

UIC's defense forced nine first-half turnovers and limited Valpo to just 7-of-26 shooting through the opening twenty minutes. The Brown and Gold trailed 35-18 at halftime.

The Flames parlayed 12 offensive boards into 19 second-chance points. Ruvanna Campbell had a double-double by halftime as her 13 points and 11 rebounds were both game leaders at the break.

Valpo's deficit enlarged to 20 points eight minutes into the second half as Campbell recorded 9 of UIC's 11 points at one stretch.

Lexi Miller (Caledonia, Mich./Caledonia) did her part to answer. The junior trimmed it to a 55-40 game following an arc-straddling jumper and a pair of free-throws. UIC guard Terri Bender pushed the Flame advantage back to 20 points after a steal and a lay-in.

The Flames went on to collect an 86-56 victory, their first of the Horizon League season.

Valpo shot considerably better in the second half, converting 11 of their 26 shots (42.3%) from the floor. Walker had 12 of her 19 points and all five of her rebounds in the latter stanza. She has finished in double figures each of the last four tilts.

Despite a 29-point lead late in the ballgame, Campbell remained in the contest until 3:13 remained on the clock. Her final stat line reflected 30 points (13-19 FG) and 19 rebounds. The 30 points matched a career-high.

Overall, the Flames gathered 21 offensive rebounds which led to 18 more field goal attempts than the Crusaders.

Valpo (4-11, 0-2 Horizon) returns to the court Thursday evening. Oakland (7-7, 1-0 Horizon) comes to town for a 7:05 pm tipoff. Links to the audio, video, and live stats will be available at ValpoAthletics.com.