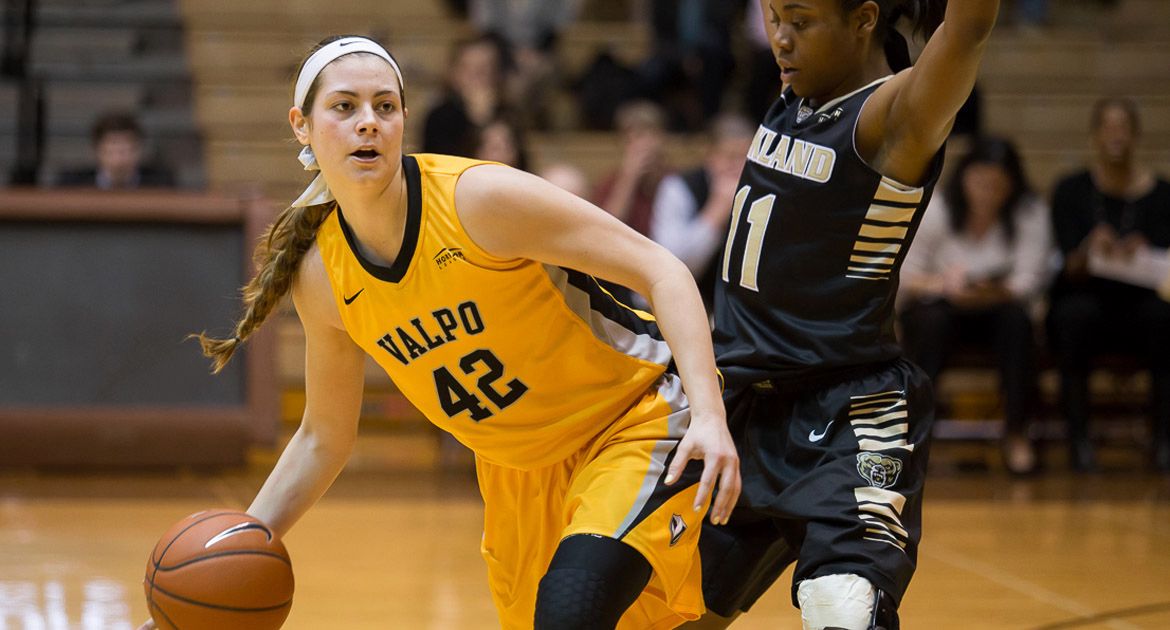 Valparaiso entered Thursday evening's game owners of the Horizon League's best three-point field percentage, but a 1-for-15 night from beyond the arc hamstrung the Crusaders in a 71-54 loss to Oakland at the Athletics-Recreation Center.

Oakland opened a seven-point lead a little more than eight minutes into the opening half. Amy Carlton popped a three to cap a short 8-2 Golden Grizzly run and make it 16-9.

Anne Hamilton (Chanhassen, Minn./Minnetonka) answered with a triple of her own right out of a 30-second timeout. Oakland was unable to put points on the board on its next five trips down the court. Meanwhile, Haylee Thompson (Hailey, Idaho/Wood River [Utah State]) tied the game at 16-16 with a pair of field goals.

The Golden Grizzlies again pushed their lead back to four points only to have the home team respond with a game-tying spurt of its own. Nola Anderson drained a three to give Oakland a 24-22 halftime lead.

Both teams experienced shooting woes in the opening half. Valpo shot 10-of-27 (27.0%) from the field, a figure that just edged out Oakland's 8-for-32 (25.0%) performance. The Golden Grizzlies had eight first-half scorers, but none with more than four points. Valpo had seven scorers, with Thompson's six representing the game leader. Hamilton's trey at the 11:35 mark was Valpo's only of the night.

The Crusaders kept it a four-point affair until Oakland's Leah Somerfield experienced a surge that ignited the Golden Grizzlies' 47-point second half. Of Oakland's 11 points scored from the 16-minute mark until 12:30, Somerfield had nine of them. During that span, it went from a 32-32 contest, to a 43-33 Oakland advantage.

The Brown and Gold cut it to eight points midway through the closing period, but a Peyton Apsey three-pointer put the game out of reach.

Thompson finished with 14 points on 6-of-10 shooting while squeezing seven rebounds.

Valpo's 6.7% figure from the perimeter represented the lowest mark by a Crusader team since March 4th, 2013 when they went 0-for-6 at the Beeghly Center.

Oakland's Nola Anderson tallied a double-double with 17 points and 12 rebounds. Apsey and Elena Popkey pitched in 12 points each.

Both teams shot considerably better in the latter stanza. The Golden Grizzlies converted 20 of their 36 field-goal attempts (55.6%) while the Crusaders were 14-for-31 (45.2%).

Valpo (4-12, 0-3 Horizon) will close out its homestand Saturday afternoon versus Wright State (13-4, 2-1 Horizon). The Raiders and Crusaders will hook up in a 1:35 pm CT tipoff. Links to the audio, video, and live stats are available at ValpoAthletics.com.