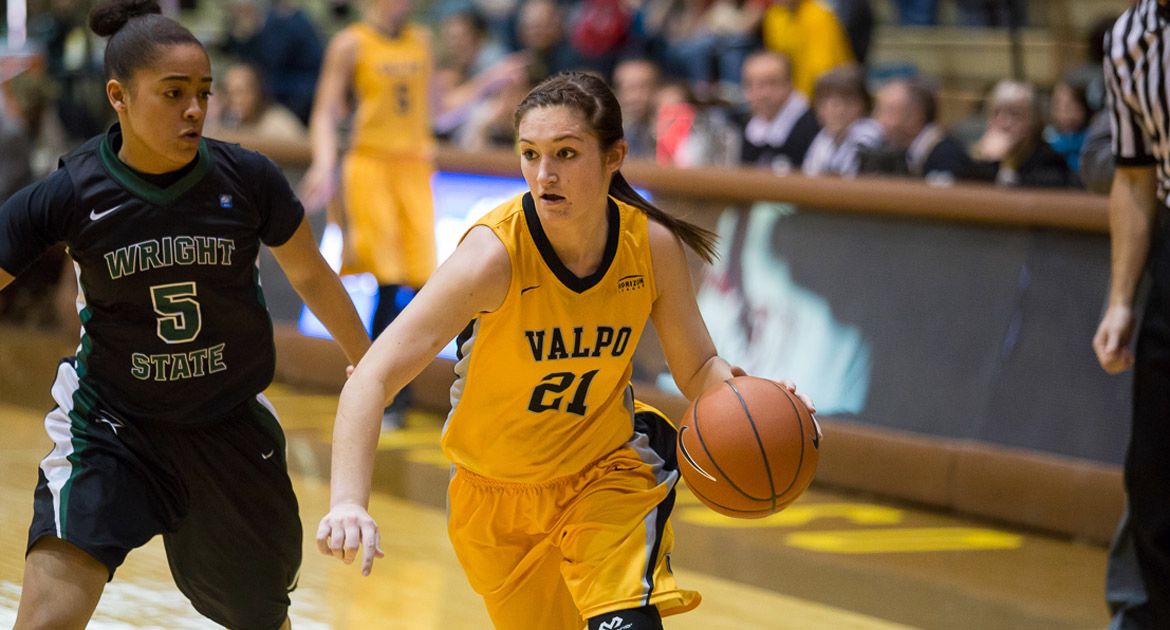 Lexi Miller was 7-for-16 from the field, including 5-for-9 from three-point range, as she scored a career-high 21 points vs. Milwaukee on Wednesday. (Avery Davis)
Valparaiso at Milwaukee | January 21, 2015

Scoring came early and often in a back-and-forth first stanza. Abby Dean (Carmel, Ind./Carmel) scored all seven of her points in the opening four-and-a-half minutes. She was 2-for-2 both from the field and the line. However, foul trouble limited her playing time the rest of the evening.

Miller dropped in 14 points in the first twenty minutes. She knocked down three treys in the first half - her final one with three seconds to go snapped a 15-0 Panther run.

Miller and freshman Dani Franklin (Cedar Rapids, Iowa/George Washington) did everything in their power to propel the Brown and Gold in the middle stage of the game. Miller hit a triple with 12:41 to play to put Valpo ahead 21-16. From that point until the 10:30 mark of the second half, the duo was responsible for 31 of the Crusaders' 38 points.

Fellow freshman Jasmyn Walker (Muskegon, Mich./Mona Shores) battled her way to her second consecutive double-double. After corralling eight first-half boards, Walker finished the night with 10 points and 11 rebounds. She was 4-for-8 from the floor, perfect on her lone attempts from the charity stripe and perimeter.

The Crusaders clawed their way back from a deficit that ballooned as high as 11 points with 12 minutes remaining. Following a pair of Jordyn Swan free-throws, Valpo embarked on an 11-0 surge to knot the game at 60-60. The Panthers doused the Crusader run with a 10-1 stretch of their own. UWM's Macie Dorow drilled a trey from the wing to put Milwaukee back on top by nine with 6:44 to play.

The Panthers saw their edge wither to five points at 79-74 with 1:31 on the clock. Five consecutive 1-for-2 trips at the foul line by Milwaukee left the door slightly ajar for a Crusader comeback. Valpo drew to within 84-79 with 45 seconds left, but Swan went perfect on her two subsequent trips to the charity stripe.

Carr scored 11 of her 13 points in the final seven minutes of the tilt. The senior dispersed 11 assists to seal her second double-double in the last seven games.

Valpo shot 13-for-23 (56.5%) from beyond the arc. The 13 three-pointers represented a season watermark and tied the most by a Crusader team in a single game since February 17th, 2009. Miller's five treys were a career-high.

Franklin's 8-for-10 shooting performance yielded the highest percentage in her budding career. Franklin (47.4%) and Walker (46.9%) moved into fourth and fifth place, respectively, in the Horizon League for field goal percentage.

The Brown and Gold tallied 18 assists, their most against a D-I opponent since the season opener versus Butler on Nov. 14th.

The Crusaders will have a few days to prepare for UIC (12-5, 2-2). The Flames will host Valparaiso Tuesday night at the UIC Pavilion at 7 pm. Links to the audio, video, and live stats are available at ValpoAthletics.com.