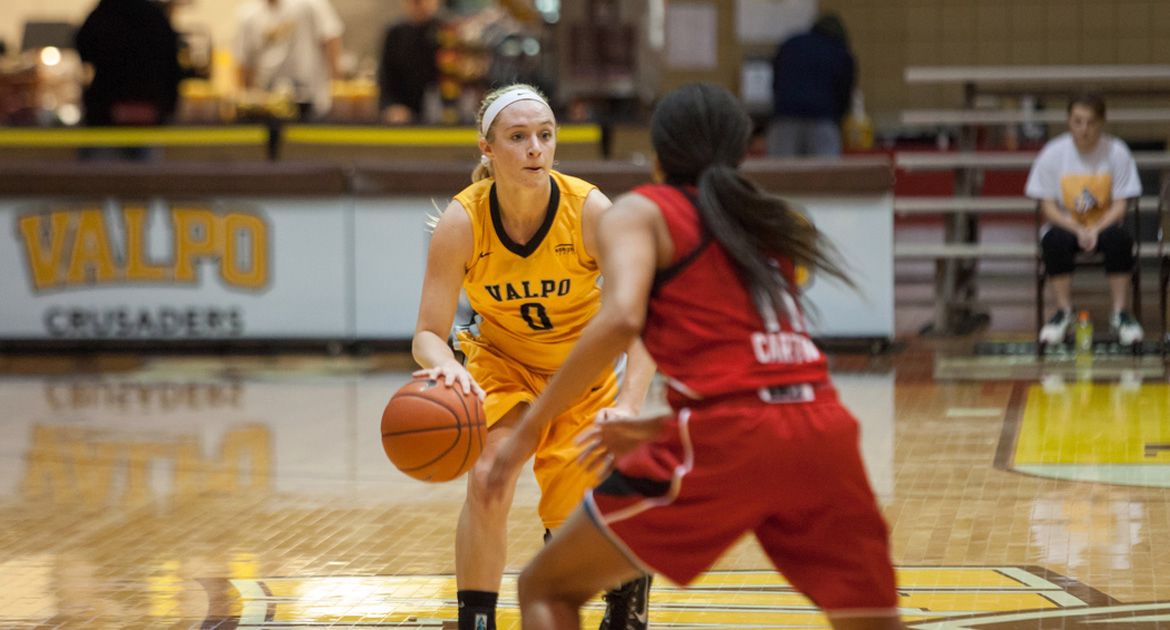 Next Up in Crusader Basketball: Valparaiso will make the short trip over to the Windy City Tuesday night for a Horizon League contest versus UIC. The two teams will close out the regular season series after meeting just 17 days prior at the Athletics-Recreation Center. Both teams are coming off road losses to Milwaukee in their last games.

Last Time Out: Lexi Miller posted a career-high 21 points while Jessica Carr recorded a career-best 11 assists, but Milwaukee claimed a 90-79 shootout at the Klotsche Center on Wednesday. The Crusaders cut a second-half double-digit deficit to five on a pair of occasions in the final 90 seconds, but the Panthers made 19 free-throws in the latter stanza to stave off a late Valpo rally. Jasmyn Walker had her second double-double (10 points, 11 rebounds) and Dani Franklin scored 22 on the most efficient shooting performance (8-10 FGs) of her young career, but UWM’s Ashley Green led all scorers with 31 points.

Head Coach Tracey Dorow: Tracey Dorow (21-59) is in her third season at the helm of the Valparaiso women’s basketball program in 2014-15. She collected her 250th career victory on November 14th, 2014 after a 91-57 walloping of Butler. In her first season, Dorow led the Crusaders to eleven victories overall, including five in Horizon League play. Dorow arrived in Valparaiso after 14 seasons at Ferris State. She compiled a 232-163 record while with the Bulldogs. Furthermore, Ferris State posted the #1 grade point average in all of Division II for the 1999-2000 women’s basketball season as well as the #2 ranking in 2002-03.

Series Notes: The all-time series that started in December of 1980 is all knotted at 21-21. The Flames have been victorious in 10 of the last 13 contests after snapping a seven-game losing streak to the Brown and Gold in February of 2009. UIC is 12-7 at home versus the Crusaders.

Storylines
- Jessica Carr is a perfect 12-for-12 from the free-throw line in her career versus UIC (8 games).
- Abby Dean is 11-for-21 (52.4%) from the field in five career games versus UIC.
- Ruvanna Campbell has the same number of field goal attempts (268) as Lexi Miller and Jasmyn Walker combined.

Jessica Carr
- Distributed a career-high 11 assists at Milwaukee last Wednesday en route to her second double-double in the last seven games.
- Tallied career bests in points (22), rebounds (8), and field goals made (8) at SIU-Edwardsville on Dec. 20th.
- Recorded game highs in points (16) and assists (6) to lead Valpo to a 79-61 win versus Tennessee Tech on Nov. 22nd.

Lexi Miller
- Racked up career highs in points (21), field goals (7), and three-pointers (5) last time out.
- Has doles out at least one assist in every game this season.
- Guided Valpo with 17 points on 4-of-5 shooting from three-point range at Northern Illinois (Nov. 20).