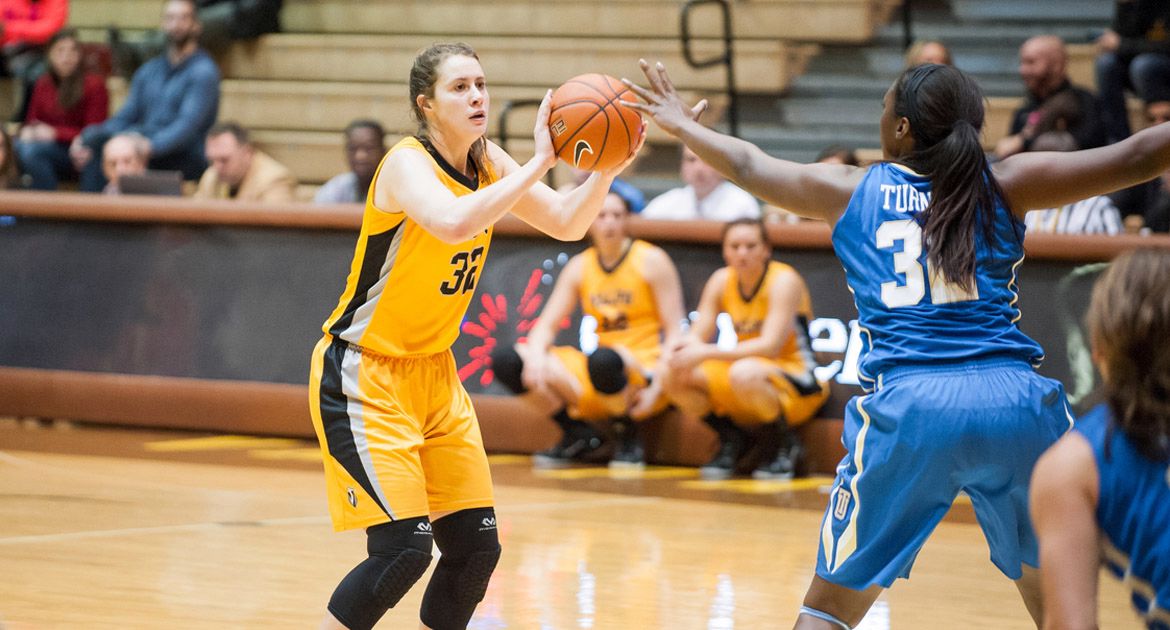 Freshman Dani Franklin was 7-for-14 from the field Tuesday night as her 15 points led the Crusader scoring attack versus UIC. (Ian Olive)
Valparaiso at UIC | January 27, 2015

For the second year in a row, the UIC Pavilion rims were unkind to the Brown and Gold as the visitors weathered a dry spell of nearly eleven minutes in the first half of a 60-42 loss to the Flames on Tuesday night.

Freshman Dani Franklin (Cedar Rapids, Iowa/George Washington) prompted the Crusaders with 15 points on 7-of-14 shooting. Senior Sharon Karungi (Kampala, Uganda/[Northern Oklahoma College]), who has been battling back from an ankle injury, chipped in eight points and ten rebounds. She logged a season-high 29 minutes off the bench.

The Crusaders had little trouble getting on the scoreboard in the infant stages of the game. Valpo recorded points on its first two possessions: one a putback from Franklin, the other a corner triple from the freshman.

Trailing 5-2 after Franklin's trey, the Flames seized the lead with a 6-0 spurt. Ruvanna Campbell put UIC on her back as eight of her game-high 21 points came in the first nine-and-a-half minutes.

Jessica Carr (Arcadia, Ind./Hamilton Heights) drove down the right side of the lane for a layup at the 14:58 mark that made it a one-point game.

Following Carr's score off the penetration, Valparaiso was stuck on seven points for the next 10 minutes and 55 seconds. During the scoring drought, the Crusaders misfired on eleven field goal attempts and turned the ball over six times.

Despite the elongated dry spell, strong defensive play on the other end didn't allow UIC to put the game away. The Brown and Gold trailed 19-9 when Franklin restored offensive order with 4:03 left in the half.

The two teams traded free throws over the final 80 seconds of the opening period as the Flames held a 24-15 advantage at the break.

The Crusaders' offensive malaise was reminiscent to last season's game-closing field goal drought of over nine minutes. UIC went on to win that contest by 18 points.

Valpo fought back to cut the deficit to as few as four points, but could never make it a one-possession tilt. Abby Dean (Carmel, Ind./Carmel) popped a triple to move it to a 28-24 game, however UIC answered with a 17-6 run to extend its edge to 15 points.

The Flames didn't relinquish a double-digit lead the remainder of the evening as they picked up a 60-42 victory. Both sides committed 20 turnovers and snatched eight steals. UIC entered Tuesday's contest third in the nation in steals per game (12.2). Tuesday represented the first time the Crusader defense forced 20 turnovers all season. It also marked the first time they held an opponent to under 61 points since their 65-50 victory at Northern Illinois on Nov. 20th.

Valparaiso will turn around and host Green Bay (15-3, 5-0 Horizon) Thursday evening at 7:05 p.m. at the Athletics-Recreation Center. Brandon Vickrey, Renee' Turpa, and Tommy Mantice will have the call on WVUR. Links to the audio, video, and live stats are up at ValpoAthletics.com.