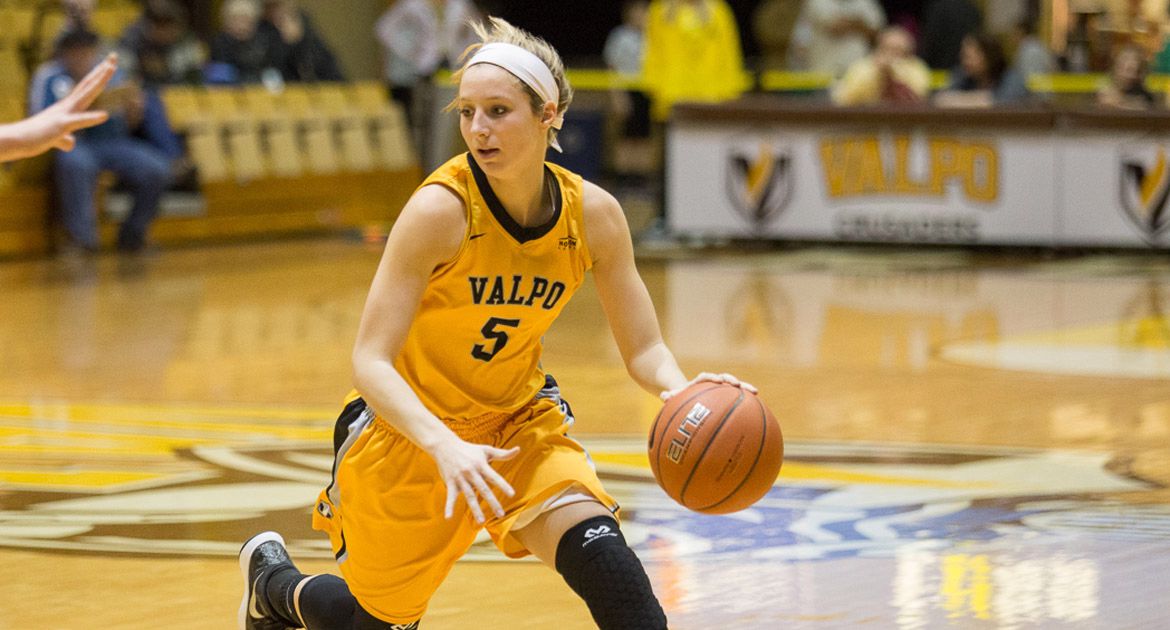 Junior Abby Dean scored 11 of her 14 points in the second half of Thursday night's game versus Green Bay. (Avery Davis)
Green Bay at Valparaiso | January 29, 2015

The Valparaiso women's basketball team outscored the visiting Green Bay Phoenix 35-29 in the second half, but it wasn't enough as the defending Horizon League regular season champions advanced to 6-0 in league play with a 67-52 victory Thursday night at the Athletics-Recreation Center.

Abby Dean (Carmel, Ind./Carmel) rebounded nicely from a slow start to lead the Brown and Gold with 14 points on 5-of-10 shooting. The junior was 4-of-5 from the free-throw line and added a season-high three steals.

Green Bay's airtight defense caused the Crusaders to stutter out of the gate. The Phoenix coaxed 15 first-half turnovers. The Brown and Gold forced nine of their own, but Green Bay still shot 50% from the field as part of its balanced scoring attack. Senior guard Megan Lukan had eight points in the opening period while Sam Terry and Jessica Lindstrom pitched in seven.

The Phoenix controlled the first twenty minutes and had a 38-17 halftime lead to show for it.

The scoring opened up quite a bit for both sides in the onset of the second half.

Dean provided five of Valpo's first seven points of the closing period, three of which came via an old-fashioned three-point play. Mehryn Kraker's triple eight minutes into the half gave the visitors their largest lead of the night at 26 points.

Green Bay maintained a comfortable lead over the remainder of the contest. Valpo assembled a pair of mini-runs over the final ten minutes of the game to cut the deficit to 15 points.

The Phoenix held on for a 67-52 victory fueled by 13 points from Lindstrom and ten from both Lukan and Kraker.

Valparaiso cleaned up its play in the final twenty minutes, committing just six miscues while outscoring Green Bay by six.

Freshman Jasmyn Walker (Muskegon, Mich./Mona Shores) finished a free-throw shy of her third double-double in Horizon League play. She scored nine and hauled in a team-leading 11 rebounds. All but one of those boards came in the second half.

Valpo will have a week off to prepare for Detroit (8-12, 3-4 Horizon). The Titans welcome the Crusaders to Calihan Hall next Thursday for a 6:00 pm CT tip. Links to the audio, video, and live stats will be available at ValpoAthletics.com.