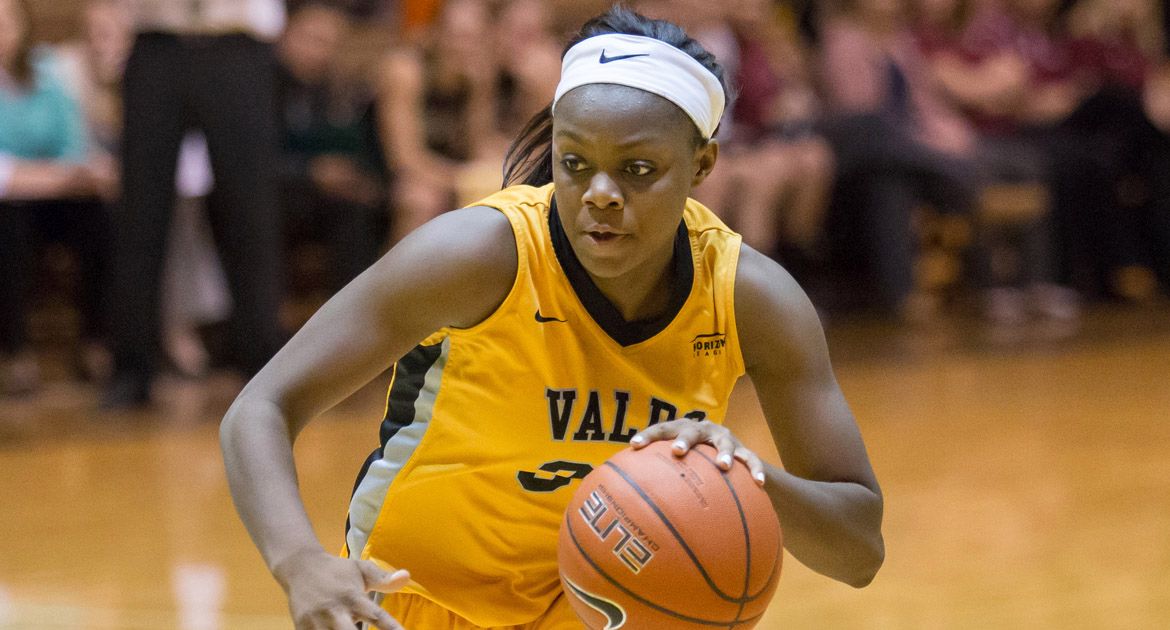 Next Up in Crusader Basketball: Valparaiso opens its first swing trip of the season Thursday evening in Detroit. The Crusaders’ last visit to Calihan Hall yielded a 76-69 victory that vaulted the Brown and Gold into the quarterfinals of the Horizon League Tournament. The Titans have needed just seven league games to match last year’s win total in HL play.

Last Time Out: The Crusaders outscored Green Bay 35-29 in the second half, but 15 turnovers in the opening frame hamstrung the home team as the defending Horizon League regular season champions advanced to 6-0 in league play with a 67-52 victory Thursday night at the Athletics-Recreation Center. Abby Dean poured in 14 points to lead Valpo in scoring for the first time since the season opener, and Jasmyn Walker finished a free-throw shy of her third double-double in HL play with nine points and 11 rebounds.

Head Coach Tracey Dorow: Tracey Dorow (21-61) is in her third season at the helm of the Valparaiso women’s basketball program in 2014-15. She collected her 250th career victory on November 14th, 2014 after a 91-57 walloping of Butler. In her first season, Dorow led the Crusaders to eleven victories overall, including five in Horizon League play. Dorow arrived in Valparaiso after 14 seasons at Ferris State. She compiled a 232-163 record while with the Bulldogs. Furthermore, Ferris State posted the #1 grade point average in all of Division II for the 1999-2000 women’s basketball season as well as the #2 ranking in 2002-03.

Series Notes: Detroit leads the all-time series 12-8. The Crusaders have won three of the last four meetings after snapping a four-game losing streak to the Titans in March of 2013. Last season’s matchup at the ARC resulted in an 85-44 Valpo win, its most lopsided victory in league play since February 13th, 2010.

Storylines
- Detroit’s Darianne Seward (3), Valpo’s Dani Franklin (2) and Jasmyn Walker (2) have been named Horizon League Freshman of the Week a combined seven times.
- Valpo led for over 36 minutes of last year’s regular season contest at Calihan Hall before falling 81-79 on a Tayelor McCalister jumper with four seconds remaining.
- In three games last season versus the Titans, Jessica Carr and Abby Dean combined to shoot 11-for-20 (55%) from beyond the arc.

@ValpoWBB
- @ValpoWBB closed out the 2013-14 slate with a 6-25 overall record, 3-13 in the Horizon League.
- @ValpoWBB was picked to finish eighth in the Horizon League in the 2014-15 Preseason Poll.
- Opponents have shot better from the free-throw line than @ValpoWBB just once in the last 11 games (Milwaukee, Jan. 21st).
- @ValpoWBB has shot below its season average from three-point range of 35.1% in five of its last six tilts.

@Detroit_Titans
- @Detroit_Titans finished the 2013-14 season with a 6-24 record, and a 3-13 mark in the Horizon League.
- @Detroit_Titans needs just one win in its final nine HL games to surpass last season’s total.
- Redshirt sopohomore Rosanna Reynolds leads @Detroit_Titans in scoring with 15.8 PPG (sixth-highest in the Horizon League) .
- Reynolds is 3rd in the HL in three-point field goal percentage (40.3%).
- Haleigh Ristovski (9.8 PPG) leads the @Detroit_Titans in assists (66) and rebounds per game (7.6).
- Autumn Rademacher is in her 7th season as head coach of the Titans.
- Rademacher graduated from UDM where she is the third-leading scorer in school history.
- Rademacher spent time as an assistant coach at Green Bay and Western Michigan before returning to Detroit.

Abby Dean
- Has made multiple field goals in each of her last six tilts.
- Finished in double figures (14) for the first time in seven games versus Green Bay last Thursday.
- Registered a career-high 21 points (9-11 FG) vs. Butler (Nov. 14).

Lexi Miller
- Disbursed six assists at UIC (Jan. 27), her most since the season opener versus Butler.
- Has doled out at least one assist in every game this season.
- Guided Valpo with 17 points on 4-of-5 shooting from three-point range at Northern Illinois (Nov. 20).