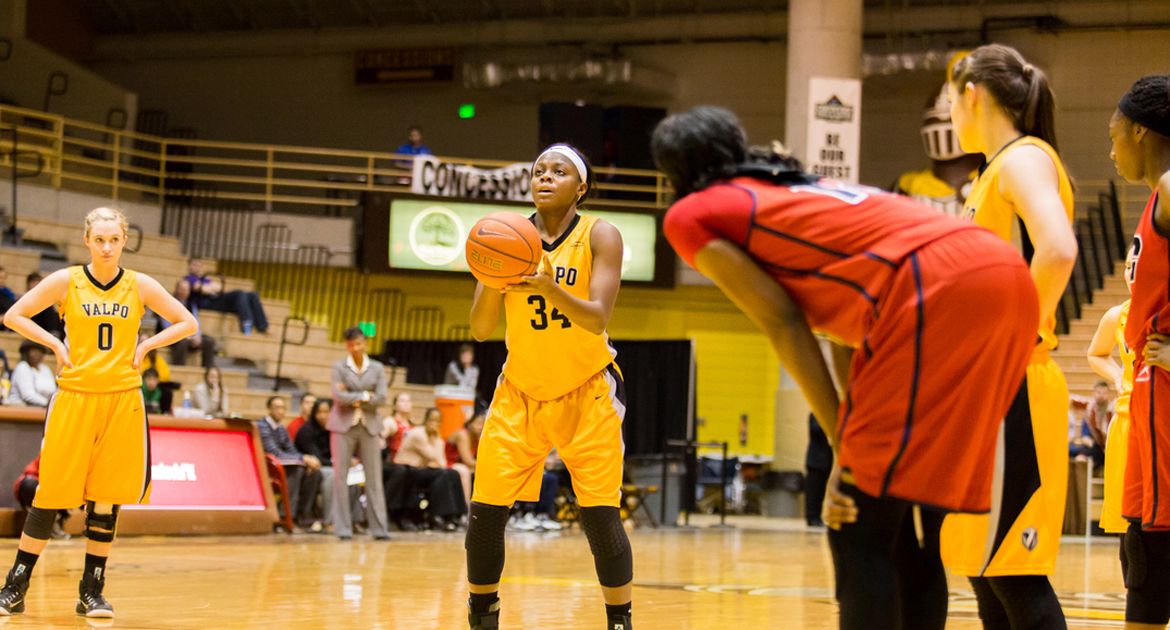 Freshman Jasmyn Walker (Muskegon, Mich./Mona Shores) vaulted her way into the Valpo record books, but Heidi Schlegel and the Youngstown State Penguins prevailed Saturday afternoon at the Beeghly Center, 80-57. Walker concluded the regular season with her ninth double-double in Horizon League play with 15 points and 11 boards. She's accumulated 241 rebounds this season, giving her the tenth-most ever by a Crusader in a single season. Walker sits ten rebounds shy of sole possession of sixth place in the school's single-season annals.

Dani Franklin (Cedar Rapids, Iowa/George Washington) matched her classmate's point total with 15, knocking down all six of her free-throw attempts and registering a 4-for-10 mark from the field. She wrapped up her first regular season with a 13.0 points per game average.

The Penguins (20-9, 9-7 Horizon) slowly but surely pulled away from the Brown and Gold in the first half. Lexi Miller (Caledonia, Mich./Caledonia) nailed a three-pointer just before the second official timeout of the half to tie the game at 16-all. But Schlegel racked up 14 points over the next seven-and-a-half minutes to put Youngstown State ahead, 36-24. The Crusader defense contained Schlegel from the field in the first half, but the senior did plenty of damage from the free-throw line. Her 16 points (3-10 FG, 10-11 FT) boosted the Penguins to a 41-30 lead at the break.

Franklin led Valpo at the half with nine points. Walker added six points on 3-of-4 field-goal shooting.

Youngstown State put together a 27-6 run over the middle stages of the closing period to secure its 20th win of the season. As a result, the Penguins clinched the No. 4 seed in the Horizon League Championship and will host the fifth-seeded Detroit Titans (12-17, 7-9 Horizon) on Wednesday evening.

By virtue of Wright State's victory over the Panthers on Saturday, the Crusaders will travel to Milwaukee on Monday evening for the first round game of the 2015 Horizon League Championship.

Video, audio, and live stats will be available for Monday night's tilt at the Klotsche Center in Milwaukee. Links to all three will be posted at ValpoAthletics.com prior to the game.