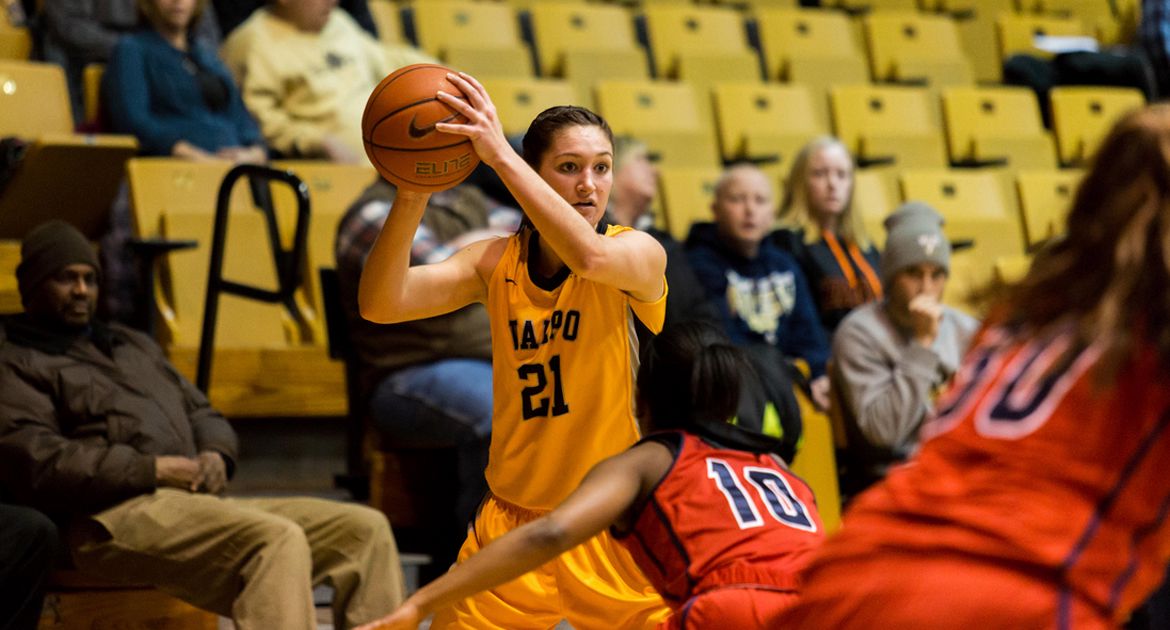 Next Up in Crusader Basketball: The opening round of the 2015 Horizon League Championship gets underway Monday evening at the Klotsche Center. Valparaiso will make its third trip to the state of Wisconsin as the Panthers await the Crusaders in what will be the teams’ fifth meeting in the last 53 weeks. The 7:00 pm CT affair will feature three of the best freshmen the Horizon League have to offer: UWM’s Jenny Lindner (10.7 PPG, 5.2 RPG) and Valpo’s Dani Franklin (13.0 PPG, 44.2 3FG%) and Jasmyn Walker (10.1 PPG, 8.3 RPG).

Last Time Out: Freshman Jasmyn Walker vaulted her way into the Valpo record books, but Heidi Schlegel and the Youngstown State Penguins prevailed Saturday afternoon at the Beeghly Center, 80-57. Walker concluded the regular season with her ninth double-double in Horizon League play thanks to 15 points and 11 boards. She's accumulated 241 rebounds in 29 games, giving her the tenth-most ever by a Crusader in a single season.

Head Coach Tracey Dorow: Tracey Dorow (23-68) is in her third season at the helm of the Valparaiso women’s basketball program in 2014-15. She collected her 250th career victory on November 14th, 2014 after a 91-57 walloping of Butler. In her first season, Dorow led the Crusaders to eleven victories overall, including five in Horizon League play. Dorow arrived in Valparaiso after 14 seasons at Ferris State. She compiled a 232-163 record while with the Bulldogs. Furthermore, Ferris State posted the #1 grade point average in all of Division II for the 1999-2000 women’s basketball season as well as the #2 ranking in 2002-03.

Storylines
- Monday night will represent the fourth consecutive play-in game in which Valpo has participated.
- This will be Valpo's first Monday night game of the year.
- The Crusaders are 3-0 in their last three Horizon League Championship play-in contests.
- Valpo has won two games in March each of the last three seasons.
- Monday’s game features three Horizon League Freshman of the Year candidates: Jenny Lindner, Dani Franklin, and Jasmyn Walker.
- All three freshmen have won three HL Freshman of the Week honors each.

@MKEWBB
- @MKEWBB rounded out the regular season 9-19 overall and 5-11 in Horizon League play.
- @MKEWBB is 6-7 at home, 5-6 at the Klotsche Center (team played two games at UWM Panther Arena).
- Opponents have shot a Horizon League-high 45.1% from the field versus @MKEWBB.
- @MKEWBB’s Ashley Green finished second in the league in scoring (19.5 PPG) and sixth in rebounding (7.8 RPG).
- Green averaged 27.5 points and 9.0 boards per game in two regular season tilts versus Valpo this season.
- @MKEWBB’s Jordyn Swan who posted 7.1 PPG and 3.8 RPG in the regular season, averaged 10.5 points and 5.5 rebounds vs. Valpo.
- Kyle Rechlicz is in her third season as head coach of @MKEWBB.
- Rechlicz graduated from University of Wisconsin where she helped the Badgers to four postseason appearances.

Lexi Miller
- Averaged 15.0 points in two games versus Milwaukee this season.
- Has made a FG and doled out at least one assist in every game this season.
- Guided Valpo with 17 points on 4-of-5 shooting from three-point range at Northern Illinois (Nov. 20).