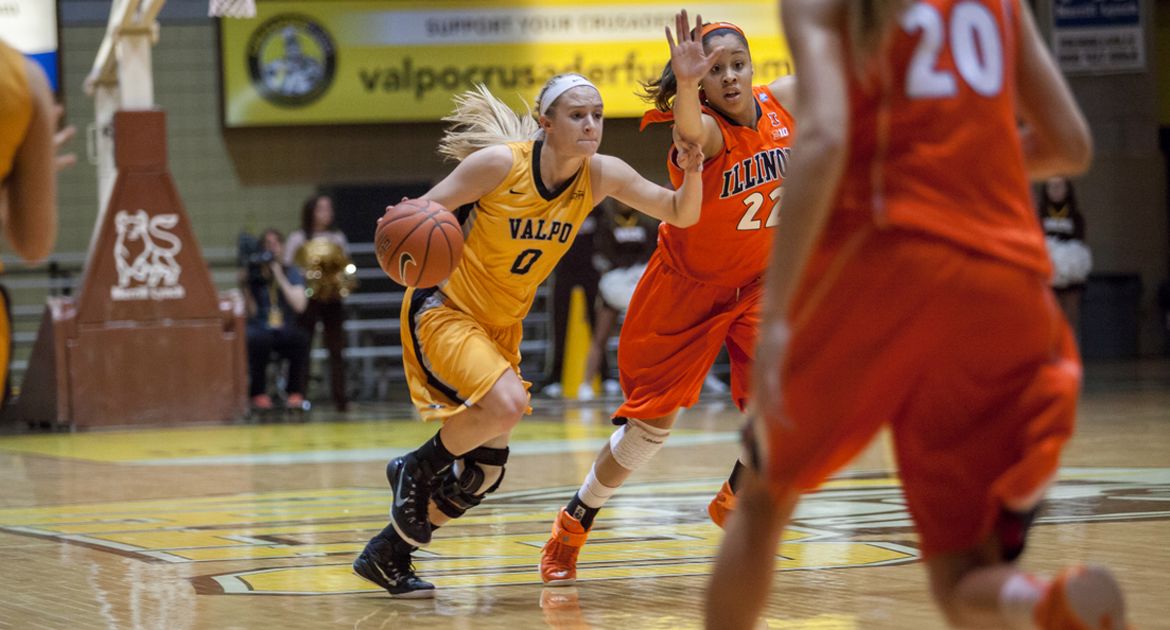 Trailing by three points at halftime, the Panthers outscored the Crusaders 38-22 over the final twenty minutes in a 77-64 contest at the Klotsche Center in Milwaukee. Junior Lexi Miller (Caledonia, Mich./Caledonia) was 5-for-6 from beyond the arc, guiding Valpo's offensive effort to the tune of 18 points. Freshman Dani Franklin (Cedar Rapids, Iowa/George Washington) added 14 points off the bench while classmate Jasmyn Walker (Muskegon, Mich./Mona Shores) finished a board shy of her tenth double-double, posting 10 points and nine rebounds.

Valpo opened the game with some of its best perimeter shooting of the season. Four different players raised the nylon on three-point attempts in the first five minutes and twenty seconds. A Franklin triple just before the 12-minute mark put the Crusaders ahead 25-20. The Brown and Gold's lead remained in that vicinity for much of the opening period. Walker briefly granted Valpo a seven-point lead at 37-30, but Milwaukee's Steph Kostowicz quickly changed that with a trey at the other end.

The Panthers' Jenny Lindner completed an old-fashioned three-point play to temporarily give the home team a one-point edge, but the Crusaders scored five of the last six points of the half. Behind Miller's 12-point (4-4 3FG) spot-on stanza, Valpo enjoyed a 42-39 advantage at half.

Things escalated quickly in the second half, though.

Milwaukee scored the first six points to reverse a three-point deficit into a three-point lead. The Crusaders went nearly the first four minutes of the half without scoring. Franklin brought the skid to a close at the 16:16 mark.

Sharon Karungi (Kampala, Uganda/[Northern Oklahoma College]) emerged from the first official timeout and knocked down one of two free throws to bring it to a 48-45 Milwaukee game. The Panthers then embarked on an 18-0 run fueled by Horizon League First Team player Ashley Green. She registered 11 of Milwaukee's 18 points during the surge that put the home team ahead comfortably.

The Panthers led by as many as 24 points in the final stretch, but Valpo closed the game on a 7-0 run to bring it to the final score.

Valpo turned the ball over a season-low six times, but surrendered 21 offensive rebounds. The Panthers outrebounded the Crusaders by a 55-40 margin. After making eight of their first 11 threes, the Brown and Gold connected on just two of their final 11 attempts.

Milwaukee had two players finish with double-doubles, and was a rebound away from having a third. Lindner contributed 13 points and ten rebounds while Kostowicz, a fellow freshman, registered 18 points and 14 boards. Green led all scorers with 23 points (9-18 FG) and added nine rebounds.

Walker's nine rebounds raised her season total to 250, tying her with Carole Pollitz for sixth-most in a single season by a Crusader.

Senior Jessica Carr (Arcadia, Ind./Hamilton Heights) put the finishing touches on a decorated career with Valpo. She dished out four assists to go with seven points and five rebounds. Her 128 assists rank as the seventh-most in a single season in school history. She closed out her career with 314 total assists. Only seven players in the history of the program have accumulated more helpers.