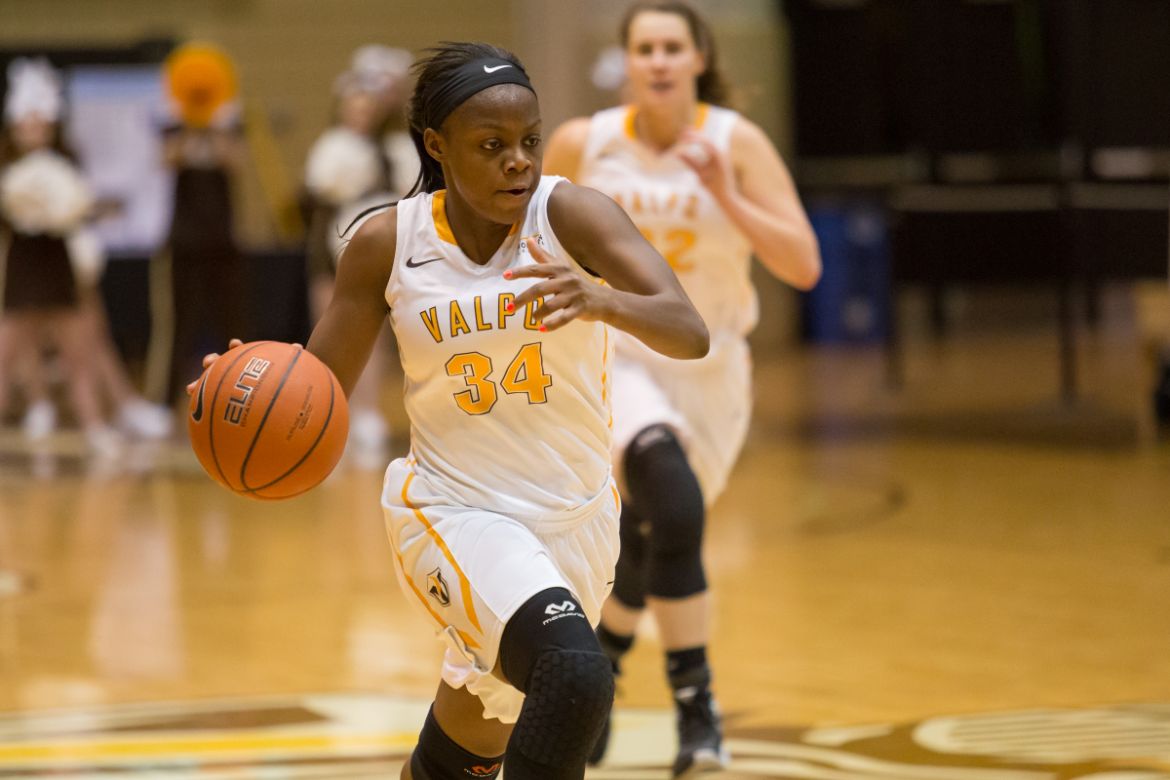 Despite leading for over 24 minutes of Thursday night's tilt versus Detroit, the Crusaders found themselves on the wrong end of a 72-66 contest when the scoreboard showed zeros. Jasmyn Walker (Muskegon, Mich./Mona Shores) squeezed a career-high 16 rebounds to go with 12 points while classmate Dani Franklin (Cedar Rapids, Iowa/George Washington) rallied the Crusaders in the scoring column with 19. Freshman Meredith Hamlet (McBain, Mich./McBain) pitched in 14 points on 5-of-11 shooting, including a 3-for-5 night beyond the arc.

Valpo got off to a hot start, controlling much of the first quarter. Hamlet nailed her first two shot attempts from the perimeter en route to an 8-4 lead just three minutes into the contest. Franklin added five in the opening stanza as the Crusaders assembled a balanced scoring attack early. Conversely, Brianne Cohen recorded nine points and Rosanna Reynolds tallied eight to account for UDM's entire first-quarter sum.

Detroit limited the Crusaders to just nine second-quarter points to snag a 33-32 halftime lead. Cohen scored 15 of her 19 points in the opening two periods. Walker, meanwhile, commandeered 11 boards by the break.

Valpo emerged from the locker room with a vengeance, flipping the one-point deficit into a lead that peaked at nine points midway through the third.

The Titans used the three-ball to claw their way back to a one-possession game. Haleigh Ristovski and Brittney Jackson canned triples on back-to-back trips down the court to draw it to 48-45.  Three minutes later, Ristovski again connected from deep to regain a one-point lead. Three lead changes highlighted the final two minutes of a third quarter in which Valpo trailed at the conclusion of, 55-53.

Down by four with 6:46 to go, Hamlet drove to the hoop as part of an old-fashioned three-point play that made it 59-58. From there, the Crusaders endured a 5:44 scoring drought that ultimately cost them the game. Valpo went 0-for-5 from the floor and turned the ball over three times amidst the frustrating stretch. Meanwhile, Detroit refused to miss from the charity stripe during the game's denouement. Lola Ristovski gave the Titans their largest lead of the night - seven points - with 1:07 left to play.

Three seconds later, Franklin put a stop to the dry spell with a trey from the point to slide the margin to four points. But again, the Titans took care of business at the foul line. Franklin's third and final three-pointer of the night moved the scoreboard to 69-66 in favor of the visitors, but that was as close as it got.

Franklin finished 6-of-11 from the floor to raise her shooting percentage to .455, putting her on the doorstep of the HL's top ten in that category. Walker's 12 points and 16 rebounds granted the sophomore her third double-double of the season, and the 12th of her Valpo career. Hamlet was 3-for-5 from downtown. The freshman is shooting 31-for-70 (.443) from long-distance, a figure that finds her on the League's podium with respect to three-point shooting.

Valpo (5-9, 1-2 Horizon) will seek to turn things around Saturday afternoon when Oakland (10-4, 2-1 Horizon) comes to town for a 1:30 pm CT tilt. The Golden Grizzlies are coming off a two-point victory over UIC Thursday night in Chicago. Saturday's game will be carried on both ESPN3 and WVUR (95.1 FM, Valparaiso). Live stats will also be available. The links to all three are up at ValpoAthletics.com.