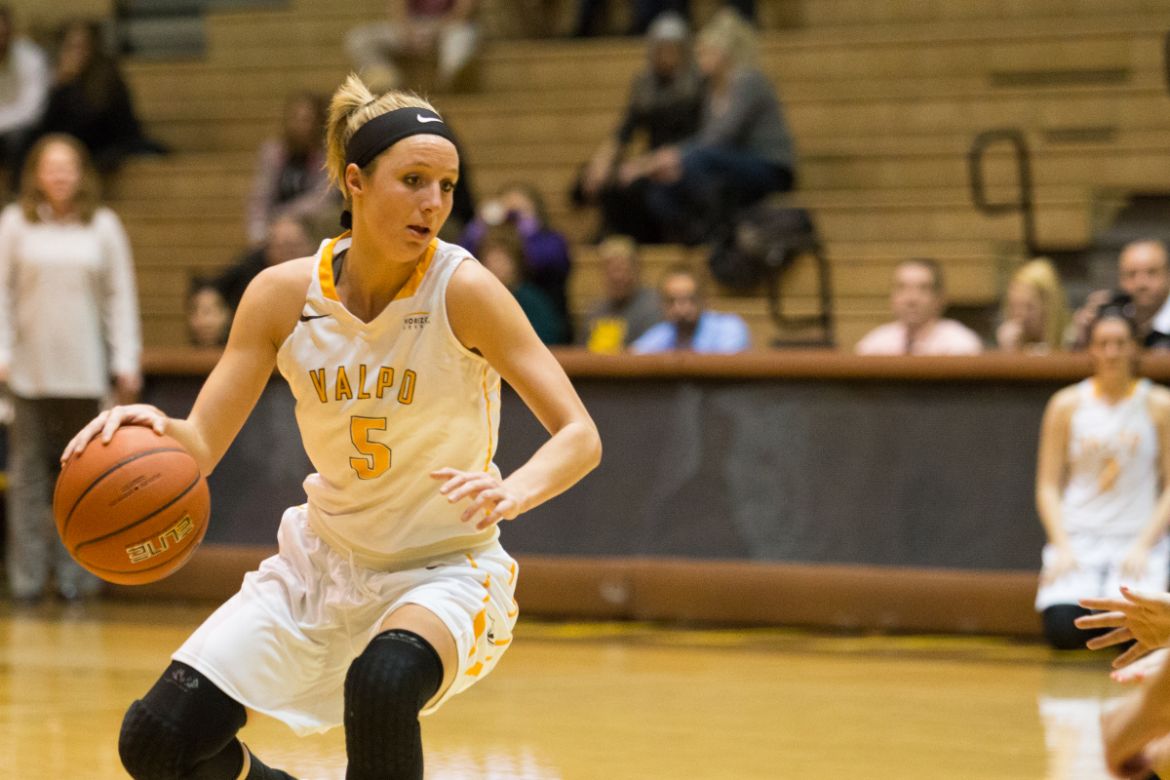 Abby Dean was 3-for-3 from three-point range as part of an 11-point game versus Milwaukee on Saturday afternoon. (Avery Davis)
Valpo at Milwaukee | January 16, 2016

Milwaukee parlayed a barrage of three-pointers into an 82-60 win over the Valpo women's basketball team Saturday afternoon at the Klotsche Center.

The Panthers connected on each of their first eight attempts from beyond the arc, and missed just once in the first half as part of a 9-for-10 shooting performance. Milwaukee finished the day 11-of-16 on three-pointers, the third-highest single game mark in program history.

Valpo saw an early 11-6 lead fizzle into a 14-11 deficit while Jenny Lindner and Alexis Lindstrom raised the nylon with threes during an 8-0 Panther surge.

Milwaukee didn't draw iron on a shot from the perimeter until the 1:51 mark of the second quarter. Kelsey Cunningham added a trey on the next trip down the court to give the Panthers a 9-for-10 mark from deep in the first half. The Crusaders trailed 49-27 at halftime.

Valpo showed resolve in the fourth quarter, but the margin was too wide for the Brown and Gold. The Crusaders outscored the Panthers 19-14 in the final period, but fell 82-60.

Dani Franklin (Cedar Rapids, Iowa/George Washington) notched nine of her team-high 14 points in the fourth quarter. Abby Dean (Carmel, Ind./Carmel) had one of her most efficient tilts of the season. The senior splashed all three of her attempts from beyond the arc and was 2-for-2 from the line to finish with 11 points. Lexi Miller (Caledonia, Mich./Caledonia) added nine points and seven assists off the bench.

Steph Kostowicz paced Milwaukee with 20 points, a career-high for the sophomore.

Valpo (6-11, 2-4 Horizon) will open a five-game homestand Thursday evening versus Cleveland State (4-11, 1-4 Horizon). The Vikings recorded their first win in league play Saturday over Youngstown State. Links to the audio, video, and live stats will be available at ValpoAthletics.com.