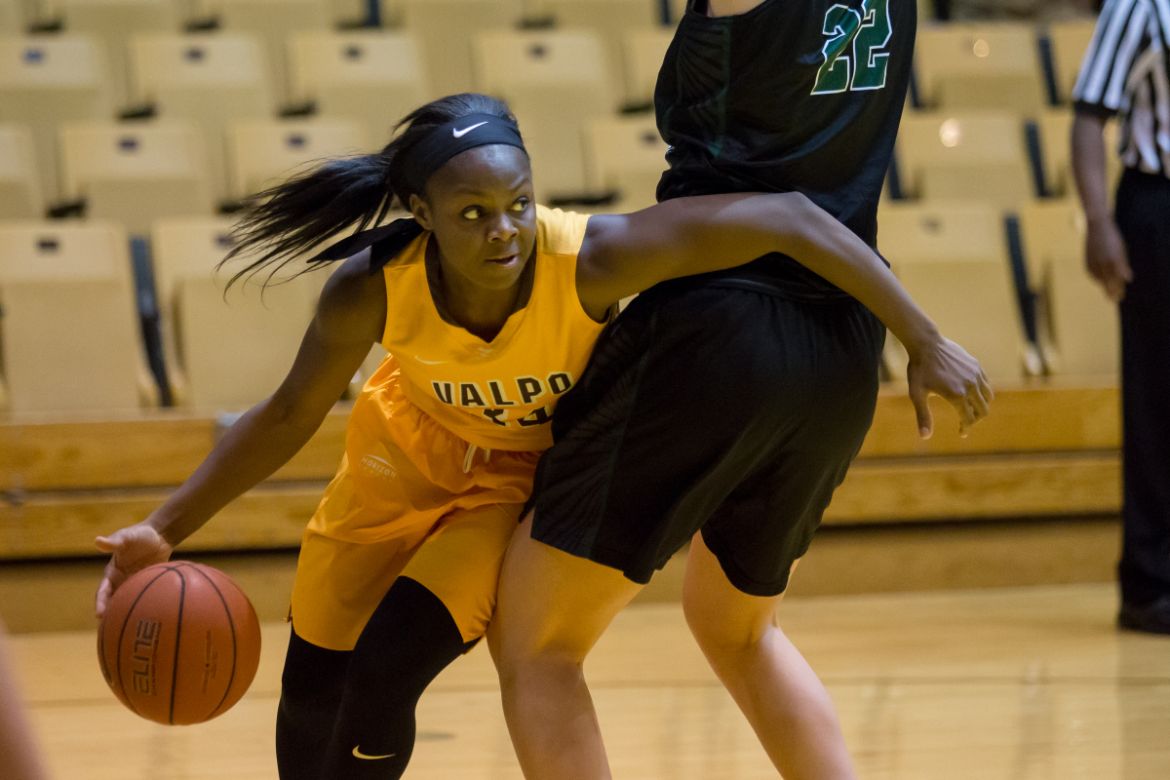 Jasmyn Walker (Muskegon, Mich./Mona Shores) collected her seventh double-double of the season Thursday night versus Wright State, but the Raiders rode an early lead into a 65-54 win over the Brown and Gold. Freshman Amber Lindfors (Elk Grove Village, Ill./Elk Grove) rejected five shots to move into sixth place in program history for blocks in a season. Wright State guard Kim Demmings dropped in a game-high 17 points while Antania Hayes added 11.

Valpo sliced the margin to as few as seven points in the second quarter, but wasn't able to make it a one-possession affair until after halftime. Walker had six first-half points to go with six rebounds as Valpo trailed 39-27 at the break. Demmings (12) and Hayes (10) made their way into double figures before half.

The Crusaders outscored Wright State in the second half thanks in large point to the effectiveness of their high-low game. Valpo burst out of the locker room and immediately used a 10-2 surge to make it a 41-37 tilt. Valpo scored 18 points in the third quarter, 14 of which came in the paint. That figure matched their inside efficiency during the entire first half. Wright State gripped a 53-45 lead with ten minutes to play.

Walker tallied the first two points of a closing quarter that slowed to an offensive crawl during the first four minutes.

Six points, however, was as close as the Brown and Gold would come. Richelle van der Keijl hit a pair of free-throws at the 4:23 mark to push Wright State's lead to double figures where it stayed for the remainder of regulation.

The Raiders corralled 20 offensive rebounds as part of a 51-44 rebounding advantage. Wright State entered Thursday night's game forcing an average of 17.3 turnovers. The Crusaders committed just 12 miscues, their fewest versus a Division I opponent since Dec. 2nd. Valpo managed just a 1-for-12 figure from three-point range. Before Thursday evening, the Crusaders had made no fewer than five treys in a game.

Valpo (8-13, 4-6 Horizon) will conclude its five-game homestand Saturday afternoon vs. Northern Kentucky. The 1:30 pm matinee will also serve as the team's annual Pink Game. Valpo will honor nearly two-dozen breast cancer survivors prior to tipoff. Links to the audio, video, and live stats are available at ValpoAthletics.com.