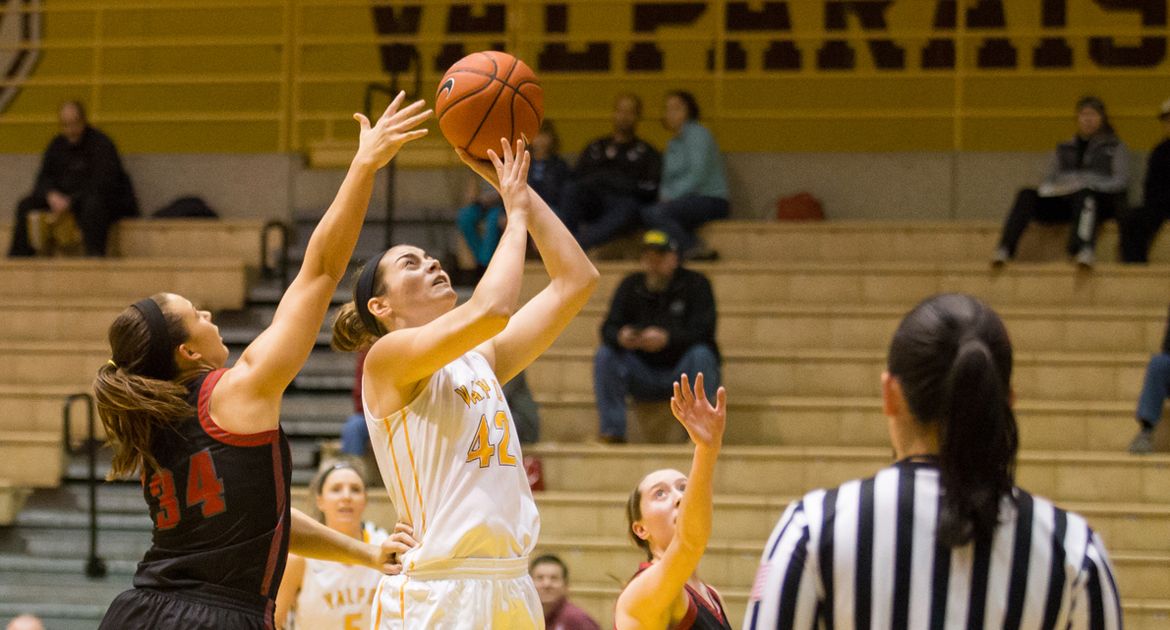 Four Crusaders finished in double figures Saturday as Valpo engineered an 80-74 victory over the host Flames at the UIC Pavilion. Dani Franklin (Cedar Rapids, Iowa/George Washington) finished with a team-high 16 points while Haylee Thompson (Hailey, Idaho/Wood River [Utah State]) was 6-for-9 from the field for 14 points.

Valpo played from behind for the majority of the first quarter. Franklin knocked down a three-pointer right out of the opening media timeout to give the Crusaders a 9-7 edge. Brittany Byrd answered with a triple of her own on UIC's subsequent trip down the court to flip the advantage. Senior Lexi Miller (Caledonia, Mich./Caledonia) came right back with a runner in the lane to wrestle the lead back from UIC at the 3:24 mark. The Flames never saw a lead again. Valpo led 18-16 after the end of the first period.

Ruvanna Campbell shouldered the load for UIC in the second quarter, but didn't receive a great deal of help from her supporting cast. She had six of the Flames' 12 second-quarter points. The Crusaders squeezed a narrow two-point edge midway through that second stanza before freshmen Hannah Schaub (Brooklyn Park, Minn./Park Center) and Meredith Hamlet (McBain, Mich./McBain) hit back-to-back three-pointers to run the score to 28-20. Schaub added a layup following a UIC timeout to give the Brown and Gold their largest lead of the day. The Crusaders took that 10-point lead into the final two minutes of the half, but UIC slashed it to four as Campbell recorded the final six points of the quarter. Valpo took a 32-28 advantage into halftime.

Both offenses picked up steam in the third quarter. Valpo and UIC traded baskets on seemingly every possession. The Flames made it a three-point game twice, but Abby Dean (Carmel, Ind./Carmel) and Jasmyn Walker (Muskegon, Mich./Mona Shores) responded with baskets both times.

UIC instilled a full-court press during a fourth quarter that saw Valpo's cushion fall into serious jeopardy. The Crusaders boasted a 63-52 lead shrivel to a single point as the Flames forced three turnovers and a pair of missed layups. Kendyl Nunn put the finishing touches on a 10-0 run with a layup of her own that made it 63-62 with four-and-a-half minutes left on the clock.

Franklin took matters into her own hands, pump-faking from the perimeter before taking a few dribbles and nailing a jumper from the right elbow. She brought a few rowdy home fans to a hush one minute later when she buried a triple from the point. Valpo staved off the late UIC surge thanks to superb free-throw shooting. The Crusaders were 16-for-20 from the charity stripe to put the Flames on ice.

Miller made seven of her season-high 13 points at the line. Saturday was the senior's first game in double figures since Dec. 7th vs. Cardinal Stritch. Miller racked up six assists opposite zero turnovers and tallied a career-high two blocks.

Overall, the Crusaders registered 22 assists on 29 field goals. They shot 29-for-58 (50%) from the floor, their highest road percentage since Dec. 30th at Northern Kentucky.

Campbell led the effort for UIC. The senior notched her 69th career double-double as she accumulated 26 points and 12 rebounds, both game highs.

With the victory, Valpo (9-20, 5-13 Horizon) reached five wins in Horizon League play for the first time since the 2012-13 season. The Crusaders will learn their first-round opponent for next week's Horizon League Championship on Sunday afternoon. WVUR (95.1 FM, Valparaiso) and ESPN3 will carry the action live from the Kress Events Center in Green Bay. Links to both in addition to live stats will be available at ValpoAthletics.com.