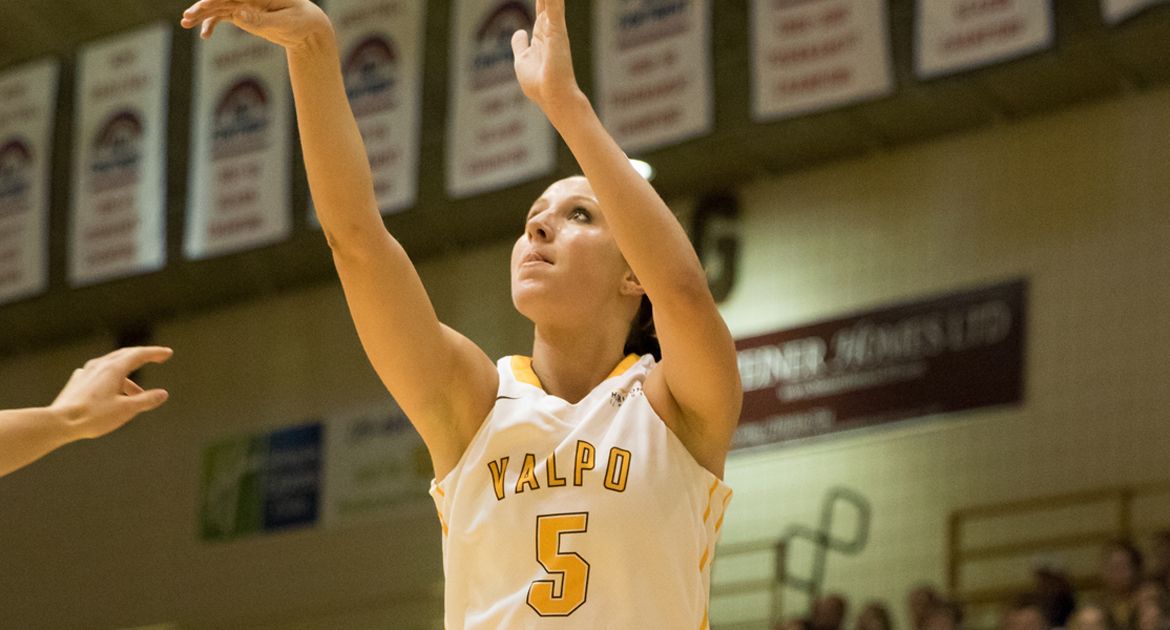 Next Up in Crusader Basketball: Hours removed from a spectacular 94-91 overtime win versus Detroit, the Crusader women’s basketball team continues postseason play Friday evening against Northern Kentucky. Jasmyn Walker needs five more rebounds to collect 250 for the second consecutive campaign. The top-seeded Phoenix are lurking in the shadows, as the winner of this matchup will meet Green Bay in the semifinals on Saturday.

Last Time Out: Valpo rode out a seemingly unsustainable pace from three-point range to overtake Detroit, 94-91, in overtime of the Horizon League Women’s Basketball Championship opener at Kress Center on Thursday. The Crusaders shot 15-of-23 (.572) from beyond the arc in the victory, matching their second-highest three-point total in program history. Jasmyn Walker tied her career scoring watermark with 23 points while freshman Meredith Hamlet pitched in 21 points. Fellow rookie Hannah Schaub knocked down all five of her three-point attempts.

Following the Crusaders: Audio: WVUR (95.1 FM, Valparaiso) - Brandon Vickrey (PxP), Parker Gatewood (Color), Renee’ Turpa (Color). Video: ESPN3. Links for the audio, video, and live stats are available at ValpoAthletics.com. In addition, follow @ValpoWBB on Twitter for in-game updates and a behind-the-scenes look at the Crusaders throughout the season.

Head Coach Tracey Dorow: Tracey Dorow (33-89) is in her fourth season at the helm of the Valparaiso women’s basketball program in 2015-16. She collected her 250th career victory on November 14th, 2014 after a 91-57 defeat of Butler. In her first season, Dorow led the Crusaders to eleven victories overall, including five in Horizon League play. Dorow arrived in Valparaiso after 14 seasons at Ferris State. She compiled a 232-163 record while with the Bulldogs. Furthermore, Ferris State posted the #1 grade point average in all of Division II for the 1999-2000 women’s basketball season as well as the #2 ranking in 2002-03.

Series Notes: The all-time series is tied, 1-1, after the two teams split the regular season series. Valpo and Northern Kentucky had not met before this season. Freshman Meredith Hamlet poured in 29 points (10-11 FG) at NKU on Dec. 30th in a 61-60 win, but the Norse responded with a 68-50 triumph at the ARC on Feb. 6th.

Storylines
- Valpo is in search of multiple wins in the Horizon League Women’s Basketball Championship for the first time ever.
- Sophomore Jasmyn Walker’s next board will move her into sole possession of 18th place for career rebounds (495) at Valparaiso.
- Friday will be Abby Dean’s 116th game in a Crusader uniform, moving her into Valpo’s Top 10 in that category.
- The Crusaders are 8-3 on the season when out-rebounding their opponents. They possessed a 72-63 edge on the boards over NKU during the regular season series.
- Hannah Schaub is 10-for-12 (.833) from beyond the arc in two neutral-site contests this season. She’s 19-for-85 (.224) in 28 other tilts.

@NKUNorseWBB
- @NKUNorseWBB owns an 18-12 record, and finished 9-9 in Horizon League play this season.
- @NKUNorseWBB defeated Cleveland State, 71-59, on Thursday to advance to Friday’s Second Round contest.
- @NKUNorseWBB boasts the sixth-highest free-throw percentage (78.2%) in the country.
- @NKUNorseWBB’s three-point shooting (.351) is also tied for the 29th-highest mark in Division I women’s basketball.
- @NKUNorseWBB sank 10 or more three-pointers seven times in its first 19 tilts, but has done so just once in its last eleven games.
- @NKUNorseWBB is led in scoring by senior Christine Roush, who is averaging 16.5 PPG, the third-highest total in the league.
- Roush was named a First Team All-League honoree this past Tuesday when the Horizon League announced its postseason awards.
- No player in the HL made more regular-season treys than Roush (80).
- Christine’s sister, Courtney, is the owner of the third-highest field-goal percentage in the league (55.2%).
- Kasey Uetrecht leads @NKUNorseWBB in total rebounds (162) in addition to providing 11.3 points per game.
- Uetrecht led @NKUNorseWBB Thursday with 15 points, seven rebounds, and five assists in their 12-point win over the Vikings.
- @NKUNorseWBB’s Rianna Gayheart leads the team in assists (90), and steals (45).
- Rebecca Lyttle scored 22 points in @NKUNorseWBB’s first meeting with Valpo, but was held to two in the second tilt in February.
- After transferring from YSU in 2013, Shar’Rae Davis is averaging 4.9 points and 3.0 rebounds in 15.6 minutes/game for @NKUNorseWBB.

Meredith Hamlet
- Named to Horizon League All-Freshman Team this past Tuesday.
- Finished in double figures 16 times this season (10.8 PPG).
- Poured in 21 points (8-13 FG) Thursday in the Crusaders’ 94-91 barnburner versus Detroit.
- Exploded for 29 points at NKU (Dec. 30) on 10-of-11 shooting, the third-highest single-game FG percentage in program history.
- Started in all 30 contests this season.

Hannah Schaub
- Team leader in assists (96) and steals (31).
- Was a perfect 5-for-5 from three-point range in Thursday’s 94-91 OT win over Detroit.
- Now has five treys in both of her neutral-site games on the season.
- Has racked up multiple assists in ten of her last eleven tilts.

Lexi Miller
- Scored in double figures (13) at UIC on Mar. 5th for the first time since Dec. 7th in addition to distributing six assists opposite zero turnovers.
- Possesses a 49:29 assist-to-turnover ratio away from home.
- Tied a career high in assists (8) at Wright State on Jan. 1st.

Imani Scott-Thompson
- Has pitched in 13 points off the bench twice in the last six games.
- Amassed a season-high four steals at Cleveland State (Feb. 29).
- Went off for a game-high 12 points versus Louisville on Dec. 5th.
- Set the NJCAA record for three-pointers in a single season (143) last year at Dakota College at Bottineau.

Amber Lindfors
- Leads the Horizon League in blocked shots per game (2.4).
- Rejected five shots and hauled in eight rebounds in Thursday’s tourney opener vs. Detroit.
- Currently in 2nd place in program history for blocks in a season and 8th on the all-time career list (68).
- Swatted six shots on three different occasions this year.
- Accumulated more blocks through ten games (22) than any Crusader in an entire season over the past eight years.
- At 6’4’’, she is the tallest Crusader since Stefanie Lang (2010-12).

Jasmyn Walker
- Valpo’s leading scorer (12.2 PPG) and rebounder (8.2 RPG).
- Matched a career high in scoring (23 points) Thursday vs. Detroit.
- Averaged 10.0 PPG and 8.0 RPG in two games vs. NKU this season.
- Currently in a tie for 18th place in career rebounds at Valpo with 495.
- Led the Crusaders in rebounding 20 times this year.
- Cradled a career-high 16 boards vs. Detroit on Jan. 7th.
- Possesses seven double-doubles this season (N. Colorado, Miami, UDM, Oakland, CSU, YSU, WSU).
- Has started all 60 games since arriving to Valparaiso.
- Recorded most rebounds ever by a freshman (250) and the sixth-most ever in a single season in program history.
- Amassed nine double-doubles in Horizon League play in 2014-15.
- Elected to 2014-15 Horizon League All-Freshmen Team.
- Named HL Freshman of the Week three times last season.
- Collected team watermark in rebounds in 14 contests.