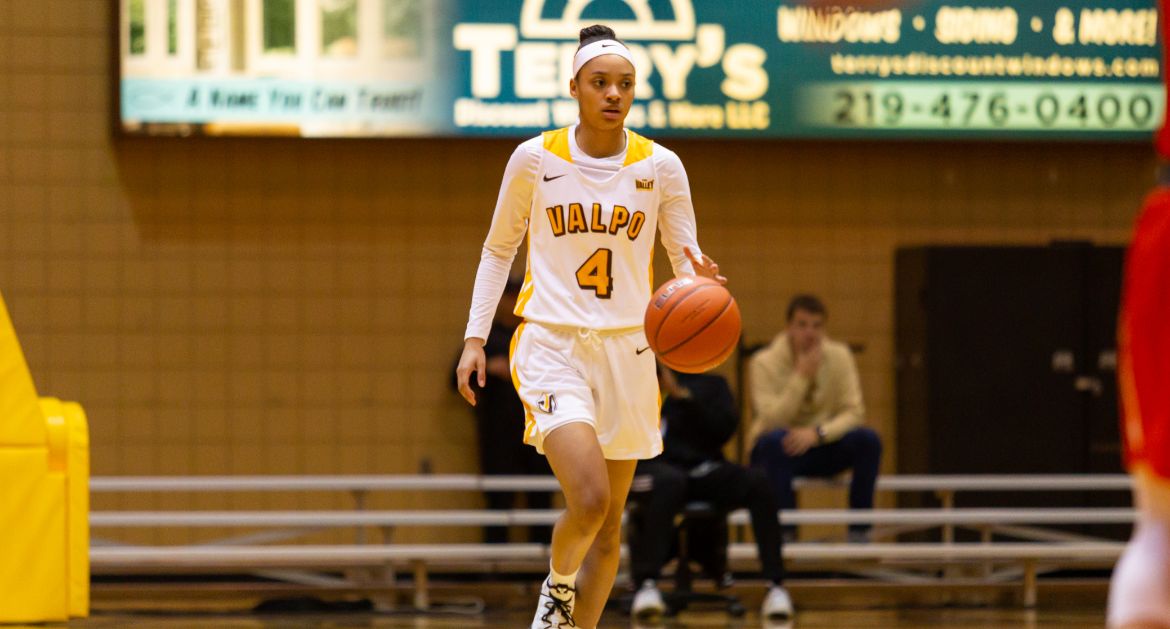 Next Up in Valpo Basketball: The Valparaiso University women’s basketball team will play on its home court for the first time in Missouri Valley Conference play this season as Indiana State comes to the Athletics-Recreation Center on Friday night. Valpo will welcome a return home after starting the league slate with three straight road contests for the first time in eight years. Valpo is the only Valley team that has not had a home game entering this weekend’s action.

Last Time Out: Drake extended its MVC winning streak to 44 consecutive games behind a strong first quarter on Sunday in Des Moines. The Bulldogs led 31-7 after 10 minutes, but Valpo put in a quality effort for the game’s duration in an 84-53 defeat. Valpo made several second-half runs including bursts of 11-0 and 9-0. Grace Hales led the team with 18 points while also establishing new career bests in steals (4) and assists (4).

Following Valpo: Friday’s game will air on ESPN+, which is available on a subscription basis for $4.99 per month. Dave Huseman (play-by-play) and Jamie Stangel (color commentary) will have the call. The game can also be heard as always on 95.1 FM WVUR (and online via TuneIn) with Ben Ariano and Danny Dalenberg. For in-game updates, follow @ValpoWBB on Twitter. Links to live video, audio and stats are available on ValpoAthletics.com.

Series Notes: This series resumed last year after it had been on hold since 2006-2007. The Sycamores have won seven of the nine meetings between the two teams with Valpo’s most recent win coming as part of the Hoosier Classic in Muncie during the 2001-02 season. Valpo lost 67-54 on Jan. 28 at the ARC and 64-48 on Feb. 23 in Terre Haute last season.

Getting it Done from Distance: Valpo has equaled or bettered its opponent in made 3-pointers in 12 of the last 13 games. The only time Valpo made fewer 3s than the opponent in the last 12 games was Jan. 6 at Loyola. Valpo has made eight 3s or more seven times this season, including 13 against Drake on Jan. 13. Valpo has already surpassed last year’s season total for number of games equaling or bettering the opposition’s number of made 3s. Valpo became just the second team to make 13 3-pointers in a game against Drake this season, joining Creighton (Nov. 28).

Swiping It Away: Three Valpo players reached career highs in steals on Jan. 13 at Drake. Ella Ellenson and Grace Hales had new personal bests by sharing the team lead with four steals apiece, while Ilysse Pitts tied a career high with three steals. The team had 13 steals, the most since Nov. 16 at Morehead State and the most steals by a Drake opponent in a game this season. The Valpo defense helped force Drake into 23 turnovers, the most the Bulldogs had committed since Nov. 15 and the second most by the Bulldogs this season. Valpo is averaging 9.3 steals per game, up from 6.9 per game last season. The last time Valpo finished a season with a steals per game average better than the team’s current mark was 2002-2003 (9.4 spg).

Hales Heats Up: Grace Hales scored 15 points in the second half on Jan. 13 at Drake, finishing with a team-high 18 points in the game. She matched a career high with seven made field goals while also setting personal bests in assists (4) and steals (4). The Valpo junior had her highest scoring output since a career-high 21 points on Dec. 2 vs. Eastern Illinois. Hales has reached double figures in four of the last five games after doing so just twice over the first 10 games of the season.

The Rookies: The freshman duo of Ilysse Pitts (8) and Shay Frederick (9) combined for 17 points in the Nov. 13 game at Drake. Pitts dished out a career-high six assists while Frederick knocked down three triples, the fourth time this year she’s made three 3s or more in a game. Pitts played 28 minutes in the contest against the Bulldogs, her season high in minutes played. Frederick also saw significant playing time in that game, spending 25 minutes on the court.

Lineup Tracker: Valpo has used the starting lineup of Hannah Schaub, Meredith Hamlet, Addison Stoller, Grace Hales and Ella Ellenson in each of the last seven games. Stoller, Hamlet and Schaub have been fixtures in the starting five for all 15 games this year. Schaub has started 75 of the 79 games she’s played in a Valpo uniform, while Hamlet has started 104 of her 106 career games. Ellenson has started 12 times this season, while Hales made her 10th consecutive start on Jan. 13 at Drake after being used almost exclusively off the bench in her first two seasons and through the first five games of this year.

Rising the Scoring Ranks: For the third consecutive season, a Valpo player climbing the all-time scoring list is a continuous storyline. After two straight seasons of Dani Franklin moving up the Valpo ranks and eventually finishing second in program history in career points, it's Meredith Hamlet's turn. Hamlet’s career total currently stands at 1,138. She has usurped Tamra Braun (2003-2007) for 11th in program history. The next target is the Top 10 as Aimee Forsman (1988-1992) ranks 10th at 1,195.

3-Point Watch: Meredith Hamlet has made 180 career 3-pointers and recently cracked the Top 5 in program history in that area. She needs three more to draw even with Dani Franklin (2014-2018), who is fourth at 183.