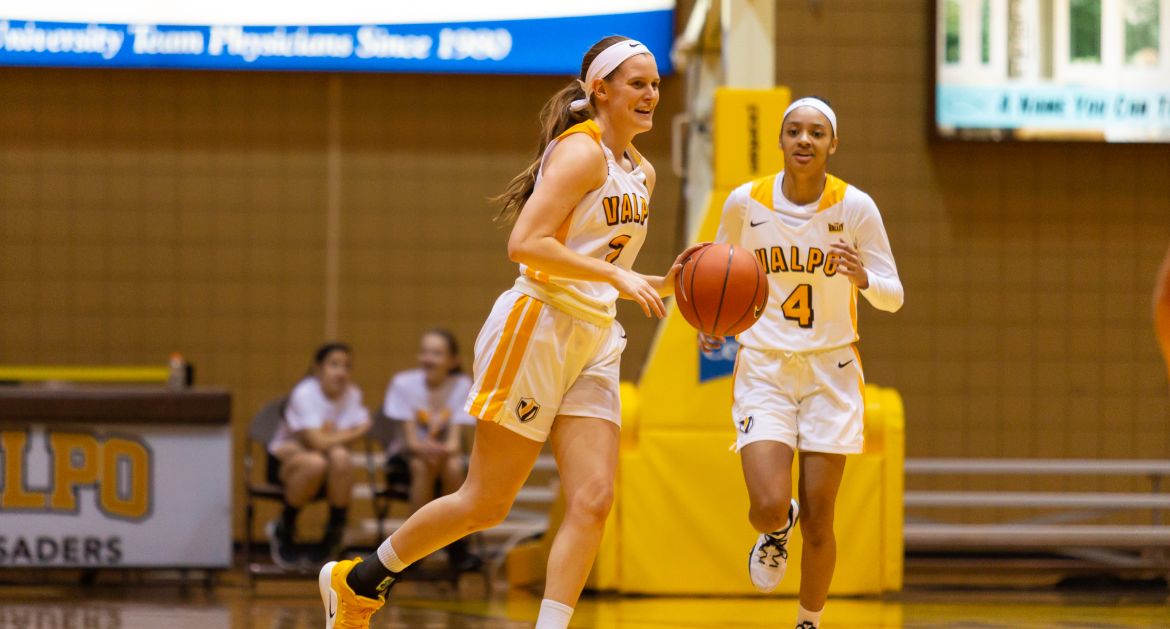 Next Up in Valpo Basketball: The Valparaiso University women’s basketball team will continue its Missouri-area voyage by battling Missouri State on Sunday afternoon in Springfield. After going through the rigors of a challenging nonconference slate, the Bears will provide a high-caliber opponent as the team is unbeaten in Valley play and is tied with Drake atop the MVC standings.

Last Time Out: A career night from Addison Stoller wasn’t enough on Friday as Southern Illinois topped Valpo 87-65 in Carbondale. The Salukis started the game on a 10-0 run and led wire to wire after holding a 26-11 lead through one quarter. Southern Illinois shot 54.5 percent for the game, the second-highest field goal percentage by a Valpo opponent this season (Loyola). Stoller (22), Meredith Hamlet (17) and Grace Hales (10) all scored in double figures for Valpo.

Following Valpo: Sunday’s game will air on television in the Chicago market on NBC Sports Chicago+ with Don West (play-by-play) and Carly Stubblefield (color commentary) describing the action. NBCSCH+ can be found on 742 on ATT (1742 HD), 109 or 102 on Comcast Xfinity (201 or 285 HD), 665-1 on Direct TV and 454 or 412 on Dish. The game will also be on ESPN3, though the broadcast may be subject to a local blackout in the Chicago TV market. In addition, Sunday’s game can be heard on 95.1 FM Valparaiso (WVUR) with Ben Ariano (play-by-play) and Brandon Vickrey (color commentary) on the call. Live updates will be provided by @ValpoWBB on Twitter and links to live video, audio and stats can be found on ValpoAthletics.com.

Series Notes: Missouri State had not played Valpo prior to last season. Valpo fell 83-60 at JQH Arena a year ago in a game Valpo trailed by just four points at halftime before being outscored 30-10 in the third quarter. The game at the ARC on Feb. 18 was much closer, as Missouri State escaped with a narrow 66-60 victory. Ella Ellenson scored 10 points in only 11 minutes off the bench, while Meredith Hamlet poured in 20 to lead three Valpo players in double figures.

Joining Top 10s: The latest achievement in the storied career of Valpo senior guard Meredith Hamlet occurred on Friday as Hamlet moved into the Top 10 in program history in career scoring. She enters Sunday’s game with 1,196 career points, one more than Aimee Forsman (1988-1992), who was previously 10th. She is 18 points away from moving into a tie for eighth with Marlous Nieuwveen (1998-2002) and Tabitha Gerardot (2010-2013) at 1,217. The career scoring list wasn’t the only Top 10 Hamlet joined with her performance on Friday in Carbondale, as she also moved into the Top 10 in the MVC in scoring average this season at 13.7 points per game.

Reaching New Heights: Redshirt sophomore Addison Stoller upped her career highs in both scoring (22) and rebounding (11) on Friday night at Southern Illinois, compiling her second career double-double in the process. Stoller’s first career double-double came on Dec. 16 of this season against North Dakota State. She became the first Valpo player with multiple double-doubles this year and now owns two of the team’s three double-doubles this season. Stoller bettered her previous scoring career high of 20 (Dec. 19 at Purdue Fort Wayne) and her previous rebounding personal best of 10, most recently reached on Dec. 16 of this year.

20&10: Stoller also became the first Valpo player this season to score 20 or more points and pull down 10 or more rebounds in the same game. The last Valpo player with a 20&10 game was Dani Franklin, who turned the trick on Dec. 10, 2017 against Chicago State with 23 points and 11 rebounds. This was Valpo’s first 20&10 game in Missouri Valley Conference play, as the last Valpo player to do it in a conference game was Amber Lindfors (22 points, 11 rebounds) on Feb. 2, 2017 vs. Youngstown State in Horizon League action.

Damage from Distance: Valpo was limited to four made 3-pointers on Jan. 25 at Southern Illinois. Prior to that game, the team had equaled or bettered its opponent in made 3-pointers in 14 of the previous 15 games. The only time Valpo made fewer 3s than the opponent in that stretch was Jan. 6 at Loyola. Valpo has made eight 3s or more nine times this season. The team has already surpassed last year’s season total for number of games equaling or bettering the opposition’s number of made 3s.

A Charitable Stripe: Valpo made a season-high 28 free throws in the overtime defeat to Indiana State on Jan. 18. In fact, that was the most made free throws in a single game by any team in the Missouri Valley Conference this season. Previously, Loyola (Nov. 17 at UIC), Bradley (Dec. 1 vs. Oakland) and UNI (Jan. 6 at Bradley) all shared the conference high for made free throws in a game with 27. The last time Valpo made 28 free throws in a game before that contest was an overtime loss vs. Montana State on Dec. 1, 2013 in a neutral-site game at Florida International. A week after the showing against the Sycamores, Valpo shot 88.2 percent at the free-throw line at Southern Illinois, the team’s best free-throw mark in conference play this year. The only time Valpo has shot at a better clip from the foul line this season was on Dec. 19 at Purdue Fort Wayne, 88.9 percent.

Swiping It Away: Valpo is averaging 9.3 steals per game, up from 6.9 per game last season. The last time Valpo finished a season with a steals per game average better than the team’s current mark was 2002-2003 (9.4 spg).

Lineup Tracker: Valpo has used the starting lineup of Hannah Schaub, Meredith Hamlet, Addison Stoller, Grace Hales and Ella Ellenson in each of the last 10 games. Stoller, Hamlet and Schaub have been fixtures in the starting five for all 18 games this year. Schaub has started 78 of the 82 games she’s played in a Valpo uniform, while Hamlet has started 107 of her 109 career games. Ellenson has started 15 times this season, while Hales has made 13 straight starts.

A Major Margin: Valpo’s victory over Evansville on Jan. 20 featured a 44-point gap between the two teams (93-49). It was the largest margin of victory by a Missouri Valley Conference team against a Division-I opponent this season. The only more lopsided win for a Valley squad this year was Drake’s 48-point triumph over Clarke (NAIA) on Dec. 4. In addition, it was Valpo’s largest margin of victory in nine years – an 80-28 win over Youngstown State on Feb. 13, 2010.

Ella’s Emergence: Ella Ellenson had quite a weekend as Valpo hosted instate rivals Indiana State and Evansville (Jan. 18 and 20). The sophomore tied a career high with 15 points against the Sycamores before pouring in 16 against the Purple Aces. She reached double figures in three straight games after doing so once over the first 14 games of the year and three times in 30 games played last season. Ellenson has had five rebounds or more in eight of her last 10 games after pulling down five boards just once over the first eight games of the year. Over the first eight games of the season, Ellenson averaged 3.4 points per game and 2.5 rebounds per game. Over the last 10 games, she’s averaging 9.3 points and 5.1 boards. For the 2018-19 season, her 6.7 points per game are over double last year’s average of 3.3. She is playing 20.7 minutes per game, a considerable jump from 8.7 a year ago. Ellenson is 15-of-39 from 3-point range this season after having just two attempts from distance last year.

Splash Sisters: Meredith Hamlet and Grace Hales combined to go 15-of-17 from the floor for 38 points in Valpo’s lopsided win over Evansville on Jan. 20. Hales’ 21 points matched a career high, equaling a mark established on Dec. 2 of this season against Eastern Illinois. She knocked down eight of her nine field-goal attempts against Evansville, tying for sixth in program history for single-game field-goal percentage with a minimum of eight attempts. She became the first player to crack the program record book in that area since Hamlet went 10-of-11 on Dec. 30, 2015 at Northern Kentucky. Against Evansville on Jan. 20, Hamlet went 7-of-8 from the floor for 17 points as she and Hales became the 18th and 19th players in program history to shoot .875 or better in a single game with a minimum of eight field goal attempts. Hales needed only 25 minutes of action to get to her career high, her fewest minutes played in the last 10 games.

Cracking the Scoring Column: The second half of the Jan. 20 win over Evansville saw a pair of players crack the scoring column for the first time in their collegiate careers. Nicole Johanson, who had previously scored in an exhibition game against IU Northwest, had a bucket, a block and a rebound in six minutes, all career firsts in regular season play. Valpo volleyball star turned women’s basketball walk-on Katherine Carlson scored her first collegiate points in the most Katherine Carlson way possible – on a hustle play. She crashed the boards off her own 3-point miss and converted the put-back despite being fouled late in the third quarter for two of her eventual five points. She also had four rebounds in just 12 minutes of action.

Ascending the Assist Chart: Redshirt junior point guard Hannah Schaub is up to 285 career assists after sliding into the Top 10 in program history on Jan. 18 vs. Indiana State. She passed Suzie Hammel (2000-2004) for 10th, while Lauren Bechtold (2002-2006) is ninth with 287. In the same game that Schaub moved into the all-time Top 10, Meredith Hamlet made her way into the Top 20 in career assists. She is currently tied for 18th with two others at 228.