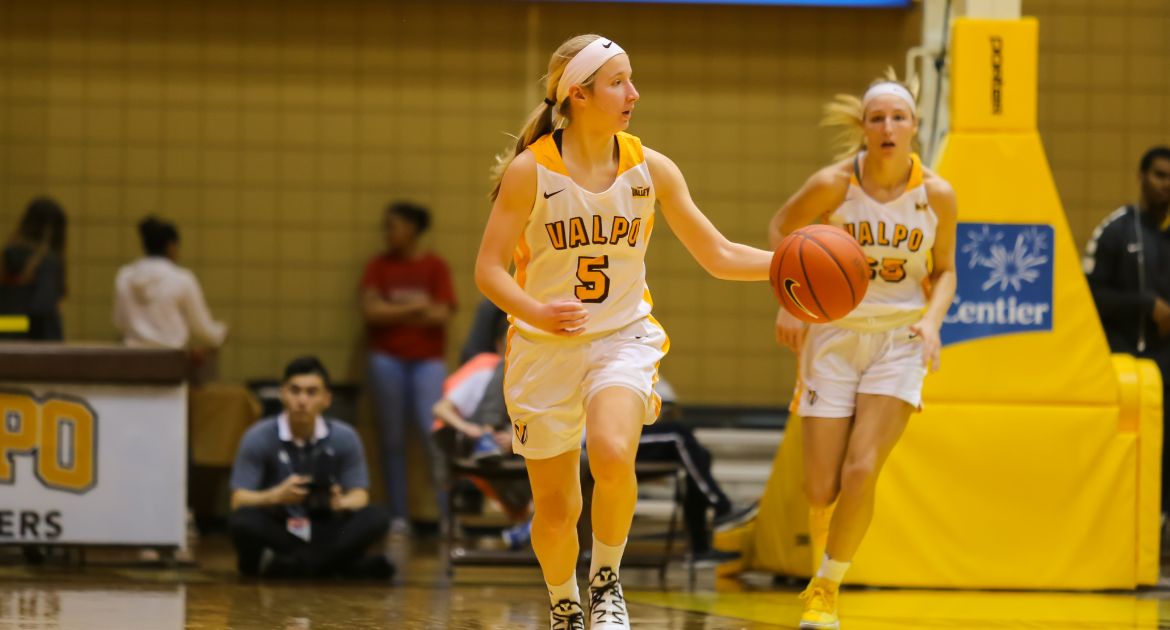 Shay Frederick had six steals on Friday against Drake, the most by a Valpo player in a game since 2014.
UNI at Valparaiso | February 10, 2019
Related Links
Related Links

Next Up in Valpo Basketball: A full day of basketball at the Athletics-Recreation Center is on tap for Sunday as the Valparaiso University women’s basketball team gets things started with an 11 a.m. tip against UNI before the Valpo men hit the hardwood for a nationally-televised game against defending NCAA Final Four qualifier Loyola. A ticket to the women’s game will be good for free admission (Section EE) to the men’s game and anyone with a ticket to the men’s game can come early to watch the Valpo women at no additional charge. The first 500 fans through the doors to see Valpo take on the Panthers will receive a free Valpo Gold Rush t-shirt.

Last Time Out: Valpo made 15 3-pointers and had two players (Ella Ellenson and Grace Hales) knock down five 3s apiece, but visiting Drake picked up an 88-62 victory on Friday at the Athletics-Recreation Center. The game got away in the second quarter when Drake outscored Valpo 23-5. Hales finished with a team-high 17 points, while Ellenson was not far behind with 15.

Following Valpo: Please note that Sunday’s game will not have video streaming available due to the ESPNU setup for the men’s game. However, fans who cannot make the game will be treated to the vivid descriptions of Ben Ariano (play-by-play) and Garrett Willis (color commentary) on the radio broadcast, which can be heard on 95.1 FM Valparaiso or online via TuneIn Radio. Links to live audio and stats will be available on ValpoAthletics.com.

Series Notes: UNI owns a 5-2 edge in the all-time set including a 3-0 record since Valpo joined The Valley prior to last season. In the last meeting that occurred in Valpo, UNI jumped out to a 24-9 lead after one quarter and never looked back in a 76-53 victory on March 1 of last season. In this year’s first meeting, UNI picked up an 80-54 win at the McLeod Center despite three Valpo players finishing in double figures (Meredith Hamlet, Addison Stoller and Grace Hales).

Tossing Up Triples: It’s become no secret that Valpo’s offense entails a large number of 3-point attempts this season. The number of 3-point tries reached a new peak on Feb. 8 vs. Drake as Valpo fired off a program-record 44 3-point attempts, shattering a mark that had stood since Feb. 27, 1992. This year’s team already owns four of the top five single-game 3-point attempt totals in program history. Before this season, Valpo had attempted more than 36 3s in a game just once all-time. The team has done so four times this year (vs. Bowling Green, at Drake, at Missouri State, vs. Drake).

Centier Bank Getting Its Money’s Worth: Valpo converted 15 3-pointers – which are sponsored by Centier Bank at the Athletics-Recreation Center – on Feb. 8 against Drake. That marked just the fifth time in program history but already the second time this season Valpo has hit 15 or more 3s in a game. The previous instances were March 10, 2016 vs. Detroit (at GB), Feb. 28, 2015 vs. UMKC, Dec. 8, 2004 vs. Central Michigan (17) and this season vs. Bowling Green (17). The 15 made 3s in a game are tied for third all-time, while the performance against Bowling Green earlier this season matched the school record.

Another 3-Point Feat: Valpo accomplished yet another feat related to 3-pointers on Feb. 8 vs. Drake as two different players connected on five triples in a single game, the first time that had happened for Valpo since March 10, 2016 when Hannah Schaub and Meredith Hamlet had five apiece in an overtime victory over Detroit Mercy in the first round of the Horizon League Tournament. Ella Ellenson had five 3s against Drake after previously having no more than two in a single game, while Grace Hales had the fourth game of her career and second this season with five triples.

Shay’s Six Steals: Freshman Shay Frederick swiped six steals on Feb. 8 vs. Drake, the most by a Valpo player in a single game since Jan. 23, 2014 vs. Detroit Mercy. In that game, two players had six steals or more as Jessica Carr had seven while Abby Dean added six.

Amazing Grace: Grace Hales has been in double figures five times in the last six games and leads the team during that stretch at 14.5 points per game. She’s shooting 57.7 percent from 3-point distance over the last six games. In addition, Hales has not missed a free throw in the last nine games and has made 17 straight dating back to the MVC opener on Jan. 6 at Loyola. She had a similar stretch two years ago as a freshman, making 21 in a row at the charity stripe – a streak that spanned December, January and February.

Schofield’s Three-riffic Sunday: Valpo has had many accomplishments related to 3-point baskets this season, but Allison Schofield’s was a new one on Feb. 3 vs. Illinois State. The senior knocked down six 3s in a single game, becoming the first Valpo player to do so since Meredith Hamlet on Feb. 11, 2016 at Oakland. In addition, she became the first Valpo player with six triples in a home game since Betsy Adams on Jan. 20, 2010 vs. Wright State. Two others have done it on the road in recent years – Jessica Carr (March 12, 2014 at Green Bay) and Rashida Ray (Feb. 26, 2011 at Milwaukee). Schofield finished the Feb. 3 game with 22 points, rewriting her previous career high of 16 (Nov. 14, 2018 at Illinois).

What a Difference a Year Makes: The career day for Allison Schofield on Feb. 3 was the latest development in a season-long surge for the Valpo senior. This season, Schofield has played in every game when healthy, averaged 23.2 minutes per game and has played as many as 36 minutes. A year ago, she did not play due to coach’s decision in 11 games and played fewer than 10 minutes in 15 others. She is averaging 7.7 points per game after scoring 1.0 point per game a year ago. In addition, Schofield went 1-for-12 from 3-point range all of last season and is 29-of-71 from distance this year.

A Trio of 20s: Valpo accomplished the rare feat of having three players score 20 points or more in a single game in the Feb. 1 win over Bradley. Meredith Hamlet (23), Shay Frederick (21) and Addison Stoller (20) reached that plateau in a 76-73 triumph. That was the first time in at least 20 years Valpo had three 20-point scorers in a game. Indiana State turned the trick against Grand Canyon earlier this season, though the Sycamores had the benefit of overtime. Valpo, Indiana State and Drake are the only current MVC programs that have had a game with three players scoring 20 points or more in the last two decades.

Showcasing Various Standouts: In two games over a three-day span during the first weekend of February, Valpo remarkably had five different players enjoy 20-point games. Over the last five contests, the team has been led in scoring by five different players: Grace Hales (21 vs. Evansville), Addison Stoller (22 at Southern Illinois), Shay Frederick (17 at Missouri State), Meredith Hamlet (23 vs. Bradley) and Allison Schofield (22 vs. Illinois State).

Number of Games Decided by Five Points or Fewer

Have Yourself a Day, Shay: With two Valpo point guards now sidelined for the remainder of the season with injuries, Valpo has turned to Shay Frederick as the team’s starter. The true freshman responded in a big way in her first career start on Feb. 1 vs. Bradley, playing 38 minutes on her way to career bests in points (21) and assists (eight). Her previous watermarks in both categories came on Nov. 17 vs. St. Francis (Brooklyn), when she had 19 points and five assists. Frederick’s 21 points against the Braves were the most by a Valpo freshman since current senior Meredith Hamlet had three games with 21 points or more during her rookie campaign in 2015-16.

Lineup Tracker: Shay Frederick made her first career start on Feb. 1 vs. Bradley and has now made three career starts. Addison Stoller and Meredith Hamlet have been fixtures in the starting five for all 22 games this year. Hamlet has started 111 of her 113 career games. Ellenson has started 19 times this season, while Hales has made 17 straight starts.

Home Court Advantage: This marks the fourth and final game of the longest homestand of the season. This is the first time the team has played four in a row at home since Nov. 21 through Dec. 3, 2016. Valpo hasn’t had four consecutive conference home games since the 2015-16 season.

Ascending the Assist Chart: Redshirt junior point guard Hannah Schaub finished her season with 289 career assists and currently sits in ninth in program history. She usurped Lauren Bechtold (287, 2002-2006) for ninth on Jan. 27 at Missouri State. Meredith Hamlet also ranks in the Top 20 in career assists with 239, which ranks 17th.

Damage from Distance: Valpo has equaled or bettered its opponent in made 3-pointers in 18 of the last 20 games. Valpo has made eight 3s or more 13 times this season and made 10+ triples on nine occasions. Seven of those contests with 10 or more made 3-pointers have come in the last eight games.