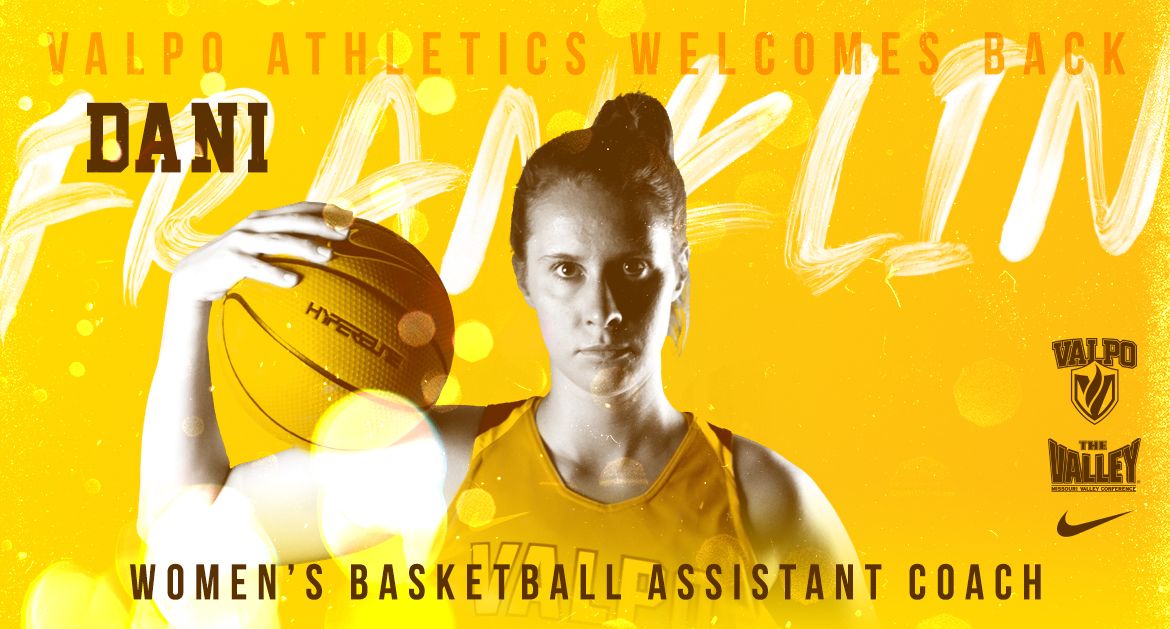 One of the best players to ever wear a Valpo uniform is coming home.

After rewriting the record books during her accomplished playing career from 2014-2018, Dani Franklin has joined the Valparaiso University women’s basketball coaching staff as an assistant coach under head coach Mary Evans.

“This means the world to me,” Franklin said. “I am so thankful that Coach Evans trusts me to come back and coach at Valpo. I’m excited because Valpo holds a very special place in my heart and it will forever. I learned so much there and grew as a person. I can’t wait to help our student-athletes grow and learn about the game of basketball and about life.”

The former Valpo standout returns to her alma mater after spending the 2018-19 season as a graduate assistant at Mercer University under veteran head coach Susie Gardner. There she contributed to a successful season that saw the Bears finish 25-8 overall and a perfect 14-0 in conference play on their way to winning the Southern Conference Tournament and receiving an automatic NCAA Tournament berth. Mercer nearly knocked off Iowa in a first-round matchup before falling to the second-seeded Hawkeyes 66-61. In her role at Mercer, Franklin handled graphics, worked with film, oversaw student managers and assisted with scouting and game preparation.

“Hiring Dani Franklin to join our coaching staff was a no-brainer,” Evans said. “Her passion and love for Valpo and for our program is greater than anyone else’s I could have hired. She is very driven and focused on what she wants out of her career and life. She’ll do everything she can to learn and grow as a coach. She knows all about the Missouri Valley Conference and the level of players we need to be successful. She’s very hungry to win at Valpo and that will come across well during the recruiting process.”

“Everything I heard about Dani before meeting her indicated that she is a mature, driven individual,” Evans said. “All of that feedback was confirmed when she stepped foot on campus for her interview. The more people I talk to about her, the more I realize that her success on the court didn’t come overnight. There was a lot of sweat equity that went into her being as good as she was. For her to be able to have those conversions with our young players and be their role model is very important.”

“I cannot wait to learn from Coach Evans,” Franklin said. “She is very positive, passionate and enthusiastic about the game of basketball. I’ve stayed in contact with many of the players throughout the season and they love playing for her. I’m so thankful for the opportunity to work under her and learn more about her tactics and her approach to running the team.”