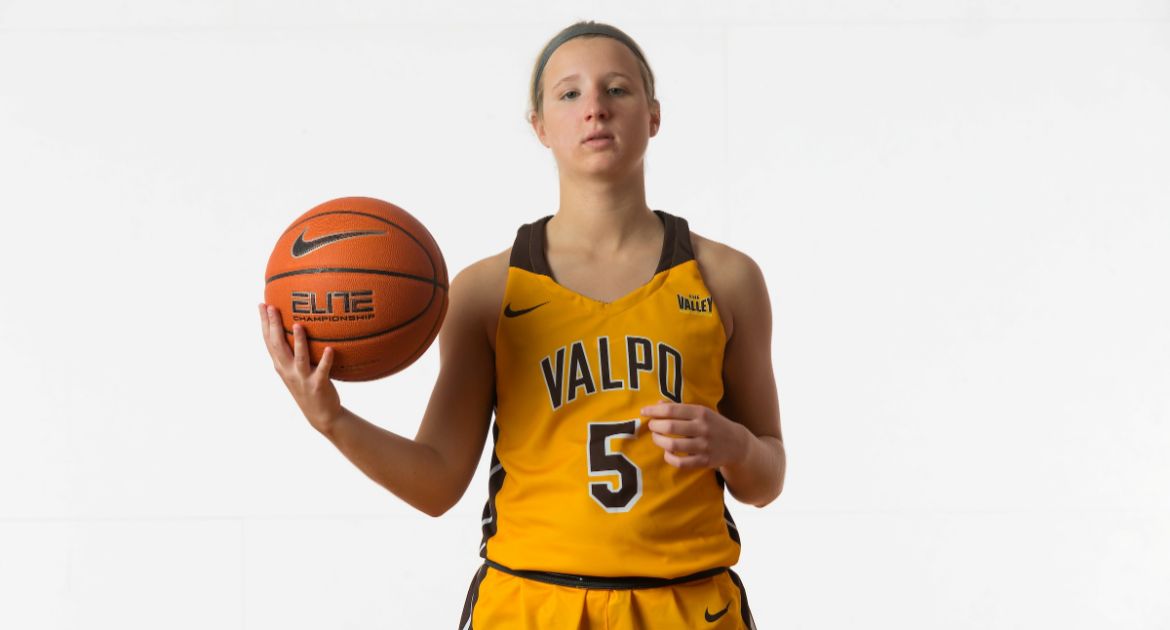 Shay Frederick has led Valpo in assists in each of the first two games.
Valparaiso at North Dakota | November 17, 2019
Related Links
Related Links

Next Up in Valpo Basketball: The Valpo women’s basketball team looks to make it a perfect swing through The Peace Garden State this weekend on Sunday afternoon as it heads to Grand Forks to take on North Dakota.

Previously: Valpo’s defense shined on Friday night in Fargo, N.D., as it forced 22 North Dakota State turnovers and held the Bison to 0-of-14 shooting from 3-point range in a 66-54 road win. Addison Stoller led Valpo offensively in the victory with 21 points, while Grace Hales finished with 14 points and a career-high tying nine rebounds.

Head Coach Mary Evans: Mary Evans (9-25) is in her second season as head coach of the Valpo women’s basketball program in 2019-20. Evans’ impact on the program was immediately clear in her first year, as Valpo shattered its previous program record of 224 made 3-pointers in a single season by knocking down 276 trifectas - a mark which ranks seventh in MVC history. Valpo ranked among the top-25 nationally in both total 3-pointers and 3-pointers per game in Evans’ first season at the helm of the Valpo program.

Series Notes: This is the second meeting in as many years between Valpo and North Dakota, as the two squads met in Valpo last season on Nov. 11, 2018 in their first-ever matchup. The Fighting Hawks came out of that game victorious, 62-56, erasing a four-point halftime deficit with a 10-point third-quarter advantage. Meredith Hamlet led Valpo with 15 points in that game, while Shay Frederick registered 11 points and six rebounds off the bench in her second career game.

...versus Ohio State
- A 3-pointer from Caitlin Morrison had Valpo within one at 11-10 with 3:08 to play in the first quarter.
- Valpo trailed 15-11 at the end of the first quarter, having forced six turnovers and held OSU to 36.4% shooting over the opening 10 minutes.
- After the teams traded baskets to start the second period, OSU went on a 12-2 run over a span of 3:39 to pull out to a 14-point lead, and then after Valpo cut the lead to nine, ended the half on an 11-2 run to lead 40-22 at the half before out-scoring Valpo 31-4 in the third quarter.
- Redshirt junior Addison Stoller paced Valpo with 11 points and six rebounds. Sophomore Shay Frederick tied for game-high honors with three assists.
- Valpo shot just 12-of-52 from the game and, coming off a record-setting 2018-19 campaign in the 3-point department, was just 2-for-25 from downtown. That mark matches the Brown and Gold’s worst shooting performance from the 3-point line in the tenure of head coach Mary Evans.
- Ohio State finished the game 35-of-67 (52.2%) from the field, but Valpo did force 18 turnovers. The Buckeyes entered the season with the nation’s fourth-ranked incoming freshman class, and the OSU rookies combined for 48 of its 89 points.

...looking ahead
- Valpo faces its second Power Five opponent of the young season on Thursday, Nov. 21 as it plays at Northwestern.
- In all, Valpo plays its first four games of the season away from home before its home opener on Nov. 24 against Bowling Green.

...on the road
- Valpo is 1-0 in true road games this year following the win at NDSU in the first of six true road non-conference games.
- The win over the Bison was Valpo’s largest true road win since a 13-point victory at Evansville on Feb. 25, 2018.
- Valpo posted a 2-12 record in true road games last season in Coach Evans’ first season at the helm.
- Both of Valpo’s road victories came in non-conference action, as it defeated Chicago State and Purdue Fort Wayne.

@UNDwbasketball
- The Fighting Hawks enter Sunday’s game at 2-1 on the young season following a 67-61 home win over Rhode Island Friday evening.
- North Dakota posted a 12-19 overall record in 2018-19 and was 6-10 in Summit League play.
- Through three games, Julia Fleecs leads the Fighting Hawks, averaging 12.7 points and 7.7 rebounds per game.
- Jaclyn Jarnot adds 12.0 points and 6.7 rebounds per game as well.

Forcing Turnovers
- It’s early in the season, but Valpo has turned up the defensive aggression and has forced 40 turnovers through the first two games.
- The Brown and Gold helped cause 18 turnovers in the season opener against Ohio State, and then last time out forced 22 miscues in the win at NDSU.
- The turnover differential was eye-popping against the Bison, as while the defense forced 22 NDSU turnovers, Valpo committed just eight turnovers of its own on the offensive end.
- The +14 turnover margin was the largest single-game difference in Valpo’s favor since the Brown and Gold forced 27 turnovers while committing just 11 in a win over Colorado State on Nov. 22, 2009.

The Difference From Deep
- Having a +30 advantage in points from the 3-point line is typically a good start towards winning a game, and that’s exactly what Valpo enjoyed at North Dakota State Friday night.
- Valpo finished the game 10-of-30 from the 3-point line, while holding the Bison without a 3-point make (0-for-14).
- It was the first time Valpo has held an advantage of at least 10 triples over its opponent since canning 13 3-pointers to Illinois State’s two on Feb. 3 of last season.
- Prior to Friday, the last time Valpo had kept its opponent from hitting a 3-pointer over the course of an entire game came on Nov. 29, 2013 at FIU.

Avenging Defeats
- Six of Valpo’s non-conference matchups are opportunities for it to flip a result and beat an opponent it lost to last year - North Dakota State, North Dakota, Bowling Green, Toledo, UIC and Morehead State.
- Valpo is 1-0 so far in that set of games following the win over NDSU.

Grace-ful Homecoming
- Receiving the waiver from the NCAA to be immediately eligible to play this season has extra-special meaning this weekend for junior Grace White.
- White is a member of the Ojibwe tribe and a native of Redby, Minn., located on the Red Lake Indian Reservation. She is the first Division I athlete from her home tribe.
- Busloads of fellow Ojibwe tribe members are expected to make the trip for this weekend’s two games to support White and Valpo, as Fargo is located just 2:50 from Redby and Grand Forks is two hours away.
- White saw action in two of Denver’s three games against North Dakota last season, averaging 5.5 points and 5.5 rebounds per game.

Life on the Road
- Valpo is in the midst of a four-game stretch away from home to open the 2019-20 campaign.
- The Crusaders have one neutral site game and three road contests before finally opening up at home on Nov. 24.
- It is Valpo’s longest stretch of games away from home to open a season since beginning the 2007-08 season with six consecutive games away from the ARC.
- The Nov. 24 home opener is the program’s latest since the 2010-11 squad also took to the ARC floor for the first time on Nov. 24.

Easing Into the Season
- The Valpo women’s team was the last MVC team, men’s and women’s, to open up the 2019-20 season when it tipped off this past Sunday afternoon, six days into the campaign.
- In all, Valpo will play just once in the season’s first 10 days and just three times over the first 16 days.

Non-Conference Challenges
- The lid-lifter against Ohio State was one of four non-conference matchups for Valpo against postseason teams from a season ago.
- A WNIT finalist from last year awaits Valpo on Nov. 21, as it makes the short jaunt to Evanston to face Northwestern.
- Valpo will take on Toledo, which advanced to the second round of the WNIT last year, in a road game on Nov. 27.
- The quartet of WNIT opponents rounds out with a home game at the ARC against Morehead State - which defeated Ohio State in the opening round of last year’s WNIT - on Dec. 17.
- That sets the stage for an MVC slate which features two matchups apiece against three postseason teams last year: Missouri State (NCAA Sweet 16), Drake (NCAA) and UNI (WNIT).