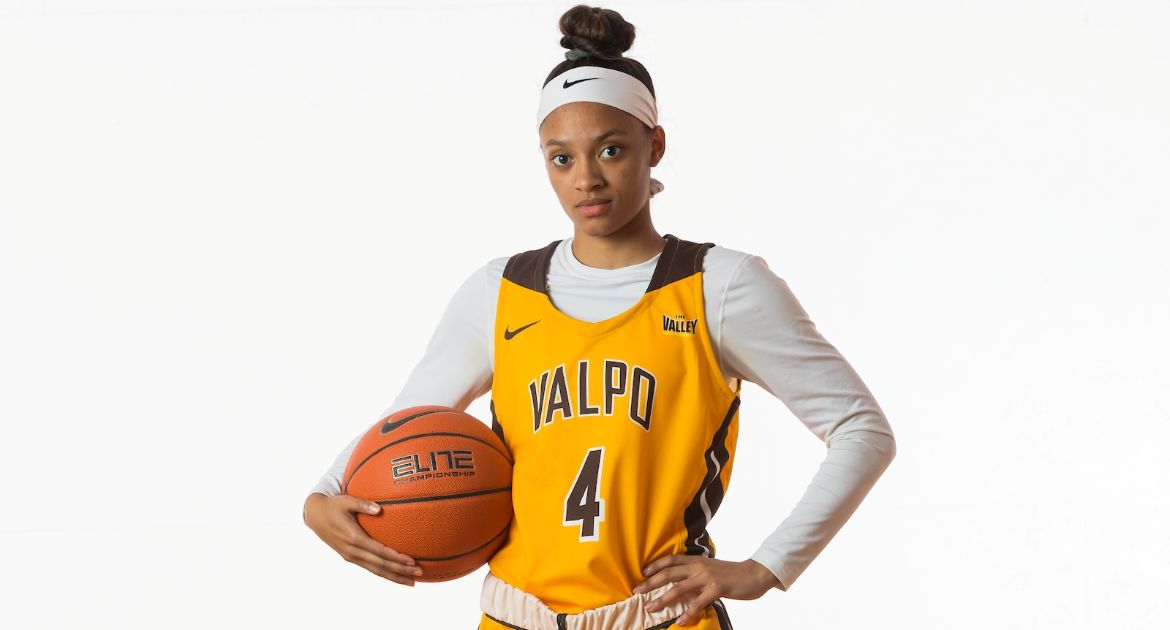 Next Up in Valpo Basketball: The Valpo women’s basketball team opens up the 2019-20 home campaign on Sunday afternoon at the ARC as it welcomes Bowling Green to town. The game marks Valpo’s lone home contest in the season’s first seven games.

Previously: Valpo faced its second Big Ten foe in the season’s first four games on Thursday evening as it traveled to Northwestern. The Brown and Gold put together a game effort against the WNIT finalists from last season, but a big second-quarter deficit was too much to overcome as the Wildcats earned a 69-48 victory. Junior Grace White led Valpo with 15 points, while redshirt junior Marlee Profitt matched her career high against a Division I opponent in just her second game back from injury.

Head Coach Mary Evans: Mary Evans (9-27) is in her second season as head coach of the Valpo women’s basketball program in 2019-20. Evans’ impact on the program was immediately clear in her first year, as Valpo shattered its previous program record of 224 made 3-pointers in a single season by knocking down 276 trifectas - a mark which ranks seventh in MVC history. Valpo ranked among the top-25 nationally in both total 3-pointers and 3-pointers per game in Evans’ first season at the helm of the Valpo program.

Series Notes: Sunday is the seventh meeting all-time between Bowling Green and Valpo. The Falcons own a 5-1 advantage to date in the series, including wins in each of the last two seasons, as this will mark the third straight year the two squads have met. BGSU won 90-77 in Bowling Green in November 2017 and then 79-72 at the ARC last December. That matchup turned into a 3-point shootout, with Valpo matching its school record by making 17 3-pointers – a mark which had been established in 2004 – while BGSU hit 14 triples of its own. Grace Hales led Valpo with 15 points on five 3-pointers, while Hannah Schaub and Shay Frederick knocked down four 3-pointers apiece.

…at Northwestern
- The Wildcats pulled out to a 13-4 lead halfway through the opening quarter, but Grace White scored on back-to-back possessions, the latter a 3-pointer, to make it a 13-9 game with 4:08 to play in the period.
- Sophomores Shay Frederick and Ilysse Pitts each connected on a 3-pointer in the final two minutes of the first quarter as Valpo was within 20-15 at the end of the opening period.
- Valpo struggled offensively in the second quarter, scoring just three points on 1-of-8 shooting from the field while turning the ball over eight times. The Brown and Gold held Northwestern to 15 points in the period, but it was still enough for the Wildcats to pull out to a 35-18 halftime lead.
- Valpo was within 15-13 of Northwestern in the third quarter and 19-17 in the fourth quarter.
- White led the way in scoring for the first time in a Valpo uniform, going 5-of-8 from the floor and a perfect 4-for-4 from the foul line for 15 points.
- Prior to Thursday, Profitt’s only game action since March of 2018 was seven minutes in the season opener against Ohio State. Thursday, Profitt took full advantage of her 15 minutes of action off the bench, hitting all three of her field goal attempts – including her first career 3-point attempt – and a trio of free throws for 10 points, matching her career best against a D-I foe. She also grabbed three rebounds and drew four fouls in her stint on the court.
- Abi Scheid led Northwestern with 21 points, but Valpo limited Lindsey Pulliam – who entered the game averaging 23 points/game and coming off a 26-point effort in the Wildcats’ win at Duke – to just two points on 1-of-12 shooting, matching her career low.
- Valpo shot just 34.8% (16-of-46) from the field for the game and was just 6-of-25 (24%) from 3-point range. The Brown and Gold held Northwestern to 37.5% (24-of-64) shooting, but the Wildcats connected on 8-of-21 (38.1%) shooting from behind the arc.
- Valpo entered the game averaging 20.3 turnovers forced/game over the season’s first three contests, but forced just 11 Northwestern turnovers on Thursday while committing 20 turnovers of its own. The Wildcats finished with a 23-7 advantage in points off turnovers.

...at North Dakota
- Valpo used a 9-0 second-quarter run to turn a six-point deficit at the end of one quarter into a 36-34 lead at intermission.
- The Fighting Hawks started the second half on a 9-0 run to pull ahead by seven, but Valpo clawed back and regained the lead with under three minutes to play in the third.
- The game was tied at the end of the third quarter, 54-54, before Valpo scored five quick points to take a five-point lead to open the fourth.
- Valpo led 63-62 with 4:46 to play after a pair of free throws, and the two teams both went scoreless for the next four-plus minutes.
- North Dakota took the lead on a second-chance basket with 29 seconds to play, and following a Valpo turnover, split a pair of free throws with 8.9 seconds remaining.
- Valpo’s last-second attempt at the game-tying basket was off the mark.
- Addison Stoller led Valpo with 23 points, a game high and just one off her career high, and nine rebounds.
- Valpo limited North Dakota to just 32.8% shooting from the field and forced the Fighting Hawks into 21 turnovers, but shot just 33.3% and committed 20 turnovers of its own.

...looking ahead
- It’s right back to the road for the Brown and Gold for the next two games, starting next Wednesday evening, Nov. 27, at Toledo.
- Valpo then has eight days before its next contest, a morning tipoff at Detroit Mercy on Thursday, Dec. 5.

@BGSUwbb
- Bowling Green enters Sunday’s game with a perfect 3-0 record on the year, having won all three of its games by double figures.
- Most recently, BGSU defeated Notre Dame College of Ohio at home, 88-54.
- Four Falcons players are averaging in double figures for a BGSU team which is posting 85.3 ppg, led by Caterrion Thompson’s 19.3 ppg.
- Kadie Hempfling has added 6.7 points, 11.0 rebounds and 7.3 assists per game.

Setting Career Highs
- A trio of Valpo players either set or matched career bests Thursday at Northwestern.
- Shay Frederick tied her career high with six rebounds, sharing team-high honors in the category.
- Addison Stoller broke her previous best by dishing out four assists to tie for the team lead.
- On the defensive end, Ilysse Pitts came up with a game-high three steals to match her career high.

Forcing Turnovers
- It’s early in the season, but Valpo has turned up the defensive aggression and has forced 18 or more turnovers in three of the season’s first four games.
- The Brown and Gold helped cause 18 turnovers in the season opener against Ohio State, forced 22 miscues in the win at NDSU and then saw North Dakota commit 21 turnovers last time out.
- The turnover differential was eye-popping in the win over the Bison, as while the defense forced 22 NDSU turnovers, Valpo committed just eight turnovers of its own on the offensive end.
- The +14 turnover margin was the largest single-game difference in Valpo’s favor since the Brown and Gold forced 27 turnovers while committing just 11 in a win over Colorado State on Nov. 22, 2009.

The Difference From Deep
- Having a +30 advantage in points from the 3-point line is typically a good start towards winning a game, and that’s exactly what Valpo enjoyed in the win at North Dakota State.
- Valpo finished the game 10-of-30 from the 3-point line, while holding the Bison without a 3-point make (0-for-14).
- It was the first time Valpo has held an advantage of at least 10 triples over its opponent since canning 13 3-pointers to Illinois State’s two on Feb. 3 of last season.
- Prior to last Friday, the last time Valpo had kept its opponent from hitting a 3-pointer over the course of an entire game came on Nov. 29, 2013 at FIU.

Finally Home
- After playing its first four matches of the season away from home, Valpo finally steps on the court at the ARC Sunday afternoon for its first home game.
- The Crusaders had one neutral site game and three road contests in their first four games.
- It was Valpo’s longest stretch of games away from home to open a season since beginning the 2007-08 season with six consecutive games away from the ARC.
- The Nov. 24 home opener is the program’s latest since the 2010-11 squad also took to the ARC floor for the first time on Nov. 24.
Non-Conference Challenges
- Valpo has already faced a pair of postseason teams from a season ago – the season opener against Ohio State (WNIT) and last time out at Northwestern (WNIT finalist).
- Valpo will take on Toledo, which advanced to the second round of the WNIT last year, in a road game on Wednesday.
- The quartet of WNIT opponents rounds out with a home game at the ARC against Morehead State - which defeated Ohio State in the opening round of last year’s WNIT - on Dec. 17.
- That sets the stage for an MVC slate which features two matchups apiece against three postseason teams last year: Missouri State (NCAA Sweet 16), Drake (NCAA) and UNI (WNIT).