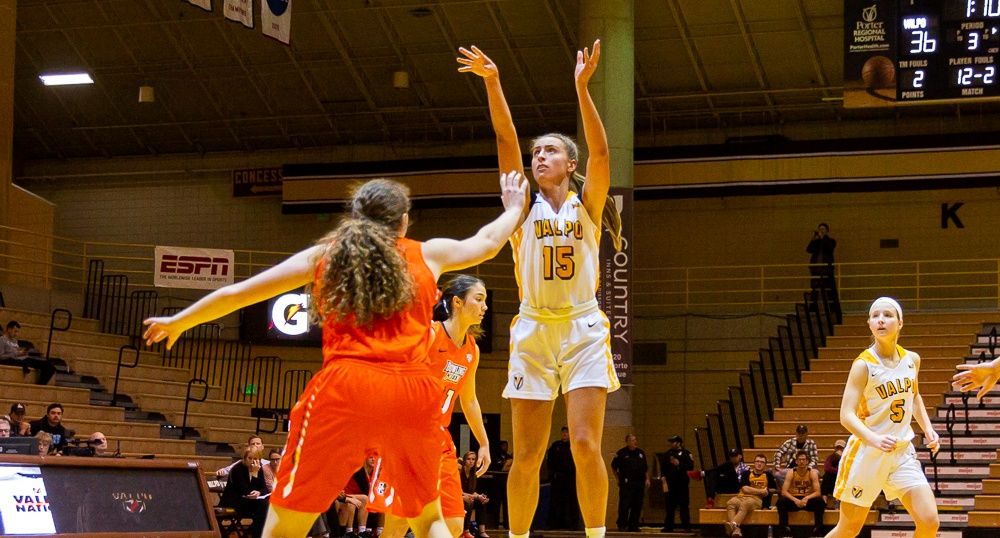 Carie Weinman went 6-of-8 from the 3-point line in Wednesday's win at Toledo.
Valparaiso at Toledo | November 27, 2019

A combination of lock-down defense in the third quarter and one of the best shooting nights in program history from the 3-point arc by sophomore Carie Weinman (Glenview, Ill./Glenbrook South [Denver]) helped lift the Valpo women’s basketball team to a 61-54 road victory at Toledo Wednesday night. Weinman finished the night 6-of-8 from downtown and poured in a game-high 20 points in the win.

“I'm really excited for our group - tonight is a big win for us, as we continue to learn how to win and learn how to do it together. Anytime you go on the road into a hostile environment, you have to come together and be tighter as a unit to come out with a win, and this group did a great job to do that tonight.”

“We ended up having a really strong second half tonight, especially on the defensive end. Toledo was getting into our paint and keeping us stretched out in the first half, and we went more to our zone in the second half to help keep our defense compact. I'm really proud of our defensive effort in that second half - everybody executed their assignments well, and it was a big step for this team.”

“This game was a collective effort tonight. Carie led us in scoring, had a great night and hit a lot of shots, and her teammates really did a good job moving the ball and finding her in open positions to shoot.”

“Marlee's just going to keep better and better. We've been trying to take it slow with her coming back from her injury and remaining careful with her minute load. She's by far our best communicator defensively, and I'm really happy for her to come back to Ohio tonight, give us eight really great minutes and make a couple of big plays down the stretch.”

Valpo (3-3) will have eight days away from competition before they return to action on Thursday morning, December 5 at Detroit Mercy. The Field Trip Day at Calihan Hall will tip off at 10 a.m. CT, and all the action can be seen live on ESPN3.