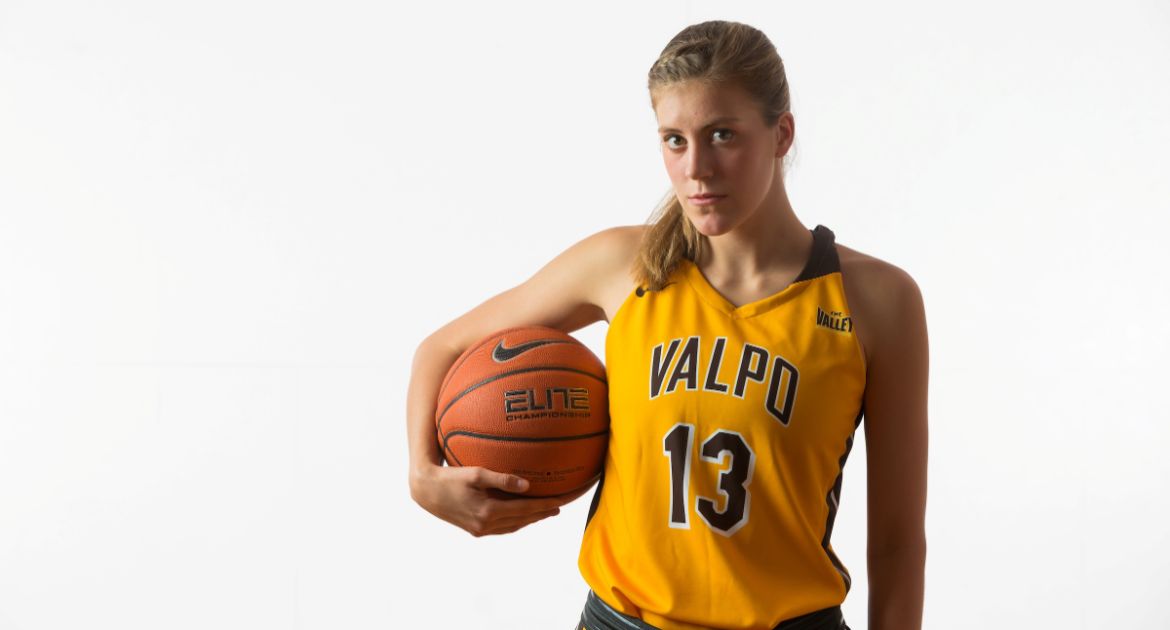 Next Up in Valpo Basketball: The Valpo women’s basketball team looks to keep rolling on Tuesday night, as it puts its four-game winning streak on the line at home against Morehead State. The game will be Valpo’s last before an 11-day break from competition for Christmas.

Previously: One of the best defensive performances in program history propelled Valpo to its fourth consecutive win on Sunday afternoon at the ARC, as it took down visiting UIC by a 63-37 final. The four-game winning streak ties the program’s longest streak of consecutive victories since 2007, while the 37 points allowed were seventh-fewest in a single game in program history.

Head Coach Mary Evans: Mary Evans (13-27) is in her second season as head coach of the Valpo women’s basketball program in 2019-20. Evans’ impact on the program was immediately clear in her first year, as Valpo shattered its previous program record of 224 made 3-pointers in a single season by knocking down 276 trifectas - a mark which ranks seventh in MVC history. Valpo ranked among the top-25 nationally in both total 3-pointers and 3-pointers per game in Evans’ first season at the helm of the Valpo program.

Series Notes: Tuesday will be just the second meeting all-time between Valpo and Morehead State, as the two squads matched up last year in Morehead, Ky. for the first time. In that game, the Eagles overcame a two-point halftime deficit to down the Brown and Gold, 68-62. Hannah Schaub led a balanced Valpo offensive effort with 11 points, while Ilysse Pitts and Shay Frederick scored 10 points apiece. Valpo forced 25 MSU turnovers and converted them into 27 points, but was unable to overcome the Eagles’ 50% shooting from the field.

...versus UIC
- Valpo claimed the lead for good on a pair of free throws by Shay Frederick with 3:55 to play in the first quarter, starting a 7-2 stretch to close the quarter as Valpo led 14-10 at the end of the first.
- Frederick scored Valpo’s first five points of the second quarter, but those five points were all Valpo could muster for the first 4:30 of the period. UIC was still within five at 19-14 as the clock ticked toward the halfway mark of the quarter.
- Valpo would turn things around over the final five-plus minutes of the first half, however, ending the frame on a 16-3 run and holding UIC without a single field goal in that entire stretch to take a 35-17 lead into the locker room.
- An 8-0 spurt in a two-minute stretch midway through the third quarter helped extend what was still an 18-point advantage to 26 at 48-22. UIC closed to within 51-30 at the end of the third, but Valpo limited the Flames to just 1-of-14 shooting from the floor in the fourth quarter to put away the victory.
- Frederick led Valpo in scoring for the second time this year as she finished with a game-high 15 points, 12 of which came in the opening 20 minutes. The sophomore connected on three 3-pointers among her five made baskets. Grace Hales added 13 points as well in the winning effort.

...at Detroit Mercy
- Shay Frederick scored all 13 of her points in the opening quarter to help Valpo to a 20-19 edge at the end of the first.
- The Brown and Gold extended their lead to 10 points for the first time at 31-21 on a triple by sophomore Carie Weinman with eight minutes to play in the first half before the Titans put together an 11-2 run to close to within 33-32 approaching the halfway mark of the period.
- Grace White responded to Detroit Mercy cutting the lead to one by connecting on her second triple of the quarter, kick-starting an 11-1 run to end the half for Valpo as it led 44-34 at intermission. Grace Hales hit a 3-pointer as part of that run as well as Valpo drilled five 3-pointers in the second quarter alone.
- After a high-scoring first half, the third quarter was more of a defensive struggle as Valpo out-scored the Titans in the period, 12-11.
- Valpo scored eight of the first 11 points in the fourth quarter to push its edge to 64-48 with 8:25 to play, and the lead wouldn’t drop under 13 points the rest of the way as the Crusaders closed out the win.
- It was a balanced team effort to get the job done on Thursday, as three Valpo players scored in double figures and two others added eight points each. Hales led the way with a game-high 17 points.
- Valpo finished the game shooting 47.3% from the floor and 83.3% (15-of-18) from the foul line.

...looking ahead
- Following the holiday, Valpo returns to action with a home game against Chicago State on Saturday, Dec. 28 before closing non-conference play at Eastern Illinois on Monday, Dec. 30.
- The MVC slate opens up at the ARC on Friday, Jan. 3 as Valpo welcomes Southern Illinois to town.

...at the ARC
- Sunday will be Valpo’s third home game of the season and the third of four in non-conference play.
- Valpo is currently 2-0 at home this season, with wins over UIC and BGSU.
- Valpo went 4-11 at the ARC last year in Mary Evans’ first season at the helm of the program.
- Valpo was just 1-5 last season at home in non-conference action before earning a trio of home wins during MVC play.

@MSUEaglesWBB
- Morehead State enters Tuesday’s contest 3-6 overall this year, most recently falling at a top-20 Michigan State squad on Sunday by a 93-48 final.
- The Eagles are still looking for their first road victory of the year, as they have also dropped games at Bowling Green, Kentucky and Dayton.
- No MSU player is averaging double figures in the scoring column, as freshman Ariel Kirkwood leads the Eagles with 9.8 points per game, but on just 27.7% shooting from the field.

The Streak Continues
- Valpo’s win over UIC on Sunday extended its winning streak to four consecutive games, matching the program’s longest winning streak since 2007.
- It was the program’s first four-game winning streak since December of 2017. Valpo has won four straight games three times over the previous 12 seasons, but all three of those streaks included at least one non-Division I opponent.
- For Valpo’s last stretch of four straight wins over Division I opposition, you have to travel back to February/March 2007, when the Brown and Gold closed the regular season with five consecutive victories and then won their Mid-Con Tournament opener for six straight wins.

Doing It With Defense
- The 37 points Valpo surrendered to UIC on Sunday afternoon were the seventh-fewest given up by a Valpo squad in a single game in program history.
- It was Valpo’s best defensive performance on the scoreboard since giving up just 32 points at Northern Kentucky on Feb. 11, 2016. It also marked Valpo’s fewest points allowed against a non-conference Division I opponent in program history.
- The Valpo defense forced 29 UIC turnovers on Sunday, the most by a Valpo opponent since the Crusaders forced Wright State into 31 miscues on Jan. 8, 2009.
- 18 of the 29 UIC turnovers were steals by Valpo defenders, matching the most steals by a Valpo team since the Brown and Gold came up with 19 against St. Xavier on Nov. 28, 2004. Valpo had two other 18-steal efforts since, most recently against Detroit on Jan. 23, 2014.
- Nine of Valpo’s 12 players Sunday came up with at least one steal, led by a career-high five thefts from sophomore Ilysse Pitts in just 11 minutes of action. The five steals were a Valpo season high by a single player as well.
- Valpo held the Flames to just 26.7% shooting from the floor, including an 0-for-7 mark from beyond the 3-point line.
- It was the second time this season a Valpo opponent has failed to make a 3-pointer, as North Dakota State went 0-for-14 from deep in the Crusaders’ win in Fargo in November. Prior to this year, the last time a Valpo opponent went scoreless from 3-point range was FIU in November of 2013.

Big Wins
- Valpo’s last two wins have come in dominating fashion, as the Brown and Gold won at Detroit Mercy 77-58 before their most recent win, taking down UIC on Sunday, 63-37.
- The 19-point margin of victory at Detroit Mercy was Valpo’s largest road victory since a 66-41 win at Youngstown State on Jan. 14, 2010.
- The 26-point margin of victory over UIC was Valpo’s largest against a Division I opponent in non-conference play since a 34-point win over Butler on Nov. 14, 2014.
- The last time the Brown and Gold enjoyed consecutive wins by at least 19 points came back in January of 2006, when they downed Centenary by 19 and Oral Roberts by 27.

Weinman Earns Award
- Sophomore Carie Weinman was tabbed the MVC Newcomer of the Week on Dec. 2 after scoring a game-high 20 points the previous week in the win at Toledo.
- 18 of Weinman’s points came from behind the 3-point line, as she connected on 6-of-8 from deep - tied for the sixth-best single-game 3-point percentage (minimum 7 attempts) in program history and the best percentage by a Valpo player since 2011.
- Weinman scored 11 of her 20 points in the third quarter, helping turn a one-point halftime deficit into a nine-point lead with 10 minutes to play.
- Weinman is Valpo’s first Newcomer of the Week honoree since joining the MVC, and only the second weekly honoree in the Valley overall for Valpo, as Meredith Hamlet earned Player of the Week accolades on Dec. 3, 2018.

Avenging Defeats
- Tuesday’s game is the sixth chance Valpo will have this season to avenge a loss from last season, as the Eagles beat Valpo by six last year.
- Valpo is currently 4-1 this year in such games, defeating North Dakota State, Bowling Green, Toledo and UIC, while dropping a two-point decision at North Dakota.
- Valpo has improved its scoring margin in those five contests by an average of 16 points/game.
- In all, six of Valpo’s non-conference matchups are opportunities for it to flip a result and beat an opponent it lost to last year - North Dakota State, North Dakota, Bowling Green, Toledo, UIC and Morehead State.

Non-Conference Challenges
- Tuesday’s game against Morehead State pits Valpo against a squad which advanced to the second round of last year’s WNIT and beat Ohio State in the first round.
- It will be Valpo’s fourth non-conference matchup against a postseason team from a season ago.
- Valpo opened the season against Ohio State (WNIT) and also played at Northwestern, a WNIT finalist, in the early going.
- Valpo’s pre-Thanksgiving win at Toledo came against a program which also advanced to the second round of the 2019 WNIT.
- The four contests against postseason teams from a season ago set the stage for an MVC slate which features two matchups apiece against three postseason teams last year: Missouri State (NCAA Sweet 16), Drake (NCAA) and UNI (WNIT).