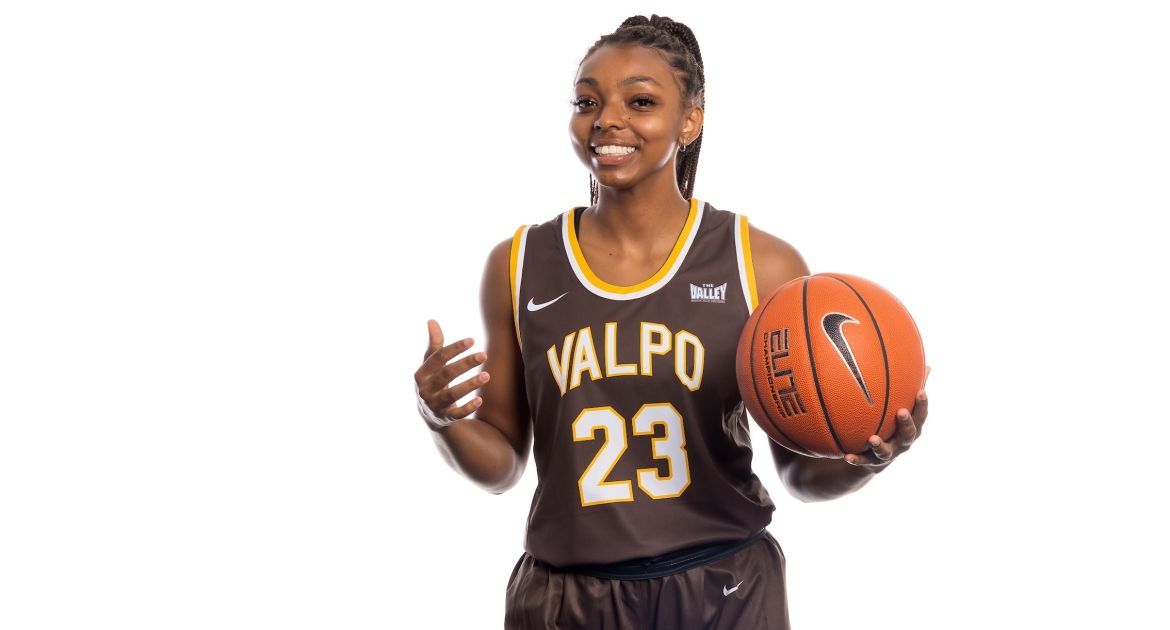 Next Up in Valpo Basketball: The Valpo women’s basketball team plays its second straight home game to open the 2021-22 campaign on Sunday afternoon, welcoming defending MAC Tournament champion Central Michigan to the ARC.

Previously: Valpo fell to Miami (Ohio) in its season opener Wednesday evening by an 85-60 final. Carie Weinman led the way for the Beacons with 12 points.

Head Coach Mary Evans: Mary Evans is in her fourth year at the helm of the program in 2021-22 and owns a record of 37-50. Evans has made an immediate impact on the program in her first three years, raising the team’s level of play to be competitive in a strong Missouri Valley Conference. Evans’ preferred style of play has been a big part of the program’s turnaround, as Valpo has led the MVC in 3-pointers made per game and in steals per game in each of the last two seasons.

Series Notes: This will be the seventh meeting all-time between Valpo and CMU, with the Chippewas holding a 4-2 advantage in the series. CMU has won each of the last four matchups, but the two teams have not met since December 2009, when CMU earned a narrow two-point win at the ARC.

...versus Miami
- Valpo never held an outright lead on Wednesday, as Miami went on a 7-0 run early in the first quarter to take control.
- The RedHawks led by nine at the end of the first, by 22 at intermission and by 33 at the end of three quarters.
- Valpo shot 47.9% (23-for-48) from the floor, but was just 7-for-23 (30.4%) from the 3-point line. Meanwhile, the RedHawks hit at a 51.4% clip (38-for-74) and claimed 20 offensive rebounds, turning them into 20 second-chance points.
- Carie Weinman led the Valpo offense with 12 points, while Leah Earnest and Maya Dunson scored nine points each.

...looking ahead
- Valpo remains at home on Sunday to take on another MAC foe, as Central Michigan visits the ARC.
- A stretch of five consecutive road games then gets underway next Tuesday with a trip to Michigan State.

...at the ARC
- Wednesday is the second of four non-conference home games and 13 home games in total this year for the Beacons.
- Valpo posted a 5-6 record at the ARC last season.

@CMUWBBall
- CMU went 18-9 last season with a NET of 90 and won the MAC Tournament to earn a spot in the NCAA Tournament.
- The Chippewas were picked to finish in sixth place in the 2021-22 MAC preseason poll.
- CMU returns three starters from last season, highlighted by First Team All-MAC guard Molly Davis. The sophomore averaged 20.8 ppg last season.
- The Chippewas fell in their season opener to Georgia Tech by a 74-40 final.

Just Win, Baby, Win
- The last two seasons have featured a combined 29 wins for Valpo, including many notable victories.
- The 2020-21 squad counted some big wins among its 12 victories, including a pair of literal B1G wins, as the Brown and Gold beat multiple Big Ten teams in the same season for the first time in program history.
- Entering the season without a win over a Power Five program since 2012-13, Valpo won at Illinois for its first-ever win over the Illini, and followed four days later with a road win at Purdue - the second win in program history over the Boilermakers.
- Valpo became the first women’s basketball program with multiple nonconference road wins at Big Ten programs since 2017-18.
- The team picked up some big wins once the schedule flipped to Missouri Valley Conference play as well last season, as three of Valpo’s seven conference victories came over teams in the top-100 of the NET.
- The 2019-20 Valpo squad had one of the top turnarounds in program history from the previous year and one of the best turnarounds in the nation. It more than doubled the win total from the prior season, as the 2018-19 team went 8-24 overall, while the 2019-20 squad went 17-12.
- It was the second-largest improvement in the win column from one year to the next in program history, trailing only the 2001-02 team, which improved an astounding 19 wins from the previous season (7-22 -> 26-7).
- Valpo’s 10.5 game improvement ranked sixth nationally.
- Valpo’s 17 wins in 2019-20 made it the program’s winningest campaign since 2006-07.
- The wins in 2019-20 came in non-conference play, where Valpo posted an 8-3 record – the best pre-conference mark in program history.
- The wins came away from home, as Valpo went 9-5 in true road games – the most road wins since the 2001-02 team won nine true road games.
- The wins came when the schedule shifted to MVC action, as Valpo finished 2019-20 9-9 in MVC play – its first .500 or better record in league play since 2008-09.

Raining Threes
- In her first three years at the helm of the Valpo program, head coach Mary Evans’ teams have become known for their propensity to shoot 3-pointers.
- Evans’ first three seasons at the helm have seen Valpo’s top-3 single-season total 3-pointers made, including a program-record 276 in her first season in 2018-19 - a mark which ranks seventh in MVC history.
- Valpo has ranked among the top-25 in the nation in 3-pointers/game all three years, with the 2020-21 squad setting a program single-season record by averaging 9.0 triples/game.
- Prior to Evans’ arrival, Valpo had made 14 or more 3-pointers in a game just nine times in program history.
- In the three seasons with her at the helm, Valpo owns nine more games with 14+ triples, including twice matching the program single-game record of 17.
- The style of play isn’t a surprise if you follow the coaching tree. Evans coached under Bob Boldon at Ohio for five years before getting the head job at Valpo, and Boldon was a former assistant coach at FGCU under their legendary head coach, Karl Smesko, whose teams have ranked among the top-5 in the nation in 3-pointers made in each of the last 10 years.

Thievery Abounds
- As much as the offensive end has been highlighted by the 3-point numbers under Evans, the defensive side has seen prolific steal numbers over the last three seasons.
- Valpo has averaged at least 8.9 steals/game in each of Evans’ three seasons.
- Each of the last two years has seen Valpo rank among the top-40 teams nationally in steals/game.
- Carie Weinman has led the MVC in steals in each of the last two seasons. She ranked 16th nationally last year, averaging 2.9 steals/game.
- Valpo tallied double figures in steals 12 times in 25 games in 2020-21, after doing so 16 times the previous season.
- With 300 steals, the 2019-20 squad finished the campaign eighth in program history in the category. The 2001-02 team (330 steals) is the only Valpo team in the last quarter-century to have registered more steals.

A Look at the Non-Conference
- Head coach Mary Evans has put together a challenging non-conference schedule to help prepare Valpo for the grind of MVC play.
- The non-conference slate features five teams which finished within the top-100 of the NCAA NET ranking last season, including three teams which appeared in the NCAA Tournament.
- Valpo will take on four MAC opponents, including the reigning regular season (Bowling Green) and tournament (Central Michigan) champions.
- The Beacons will host Notre Dame at the ARC on Dec. 8.
- Valpo also has trips to two programs - Michigan State and South Dakota - which finished in the top-40 of the NET last year.

Starters, Assemble
- Four regular starters return for Valpo in 2021-22, including a trio who own extensive streaks of consecutive games started.
- Shay Frederick, Caitlin Morrison and Carie Weinman were three of the four players who started every game a season ago.
- Frederick has started 67 consecutive games dating back to the middle of her freshman year, while Morrison and Weinman have made 55 starts in a row.
- The three were members of a quintet which started every single game in the 2019-20 season - the first time in program history the same five players started every game.
- Grace White started all 22 games she was available for last season as well.
- In contrast to that quartet, Maya Dunson made her first start in the Valpo uniform in the season opener.

Who’s Back
- 14 letterwinners from last year’s team, including four starters, return for Valpo in 2021-22.
- The four returning starters are sixth-year Caitlin Morrison, fifth-year Grace White, redshirt senior Carie Weinman and senior Shay Frederick.
- Two other seniors return as well: Maya Dunson and Ilysse Pitts.
- Junior Cara VanKempen is joined by a quintet of sophomores: Ava Interrante, Syria Butler, Leah Earnest, Lauren Gunn and Jayda Johnston.
- Katie Beyer and Molly Sheehan are also back after enrolling early for the spring 2021 semester to join the program ahead of schedule.
- In all, Valpo returns 93% of the team’s scoring, 91.6% of the rebounding and 96.4% of the assists from last year’s squad.

Same Alma Maters
- While there are 17 players on the 2021-22 Valpo women’s basketball roster, there are only 14 high schools represented, as three high schools count a pair of Beacons as alums.
- Sixth-year Caitlin Morrison and redshirt senior Carie Weinman both graduated from Glenbrook South (Ill.) H.S.
- Senior Maya Dunson and freshman Lovie Malone both are alums of Wayne (Ohio) H.S.
- Sophomore Ava Interrante and freshman Katie Beyer were teammates at McHenry (Ill.) H.S.