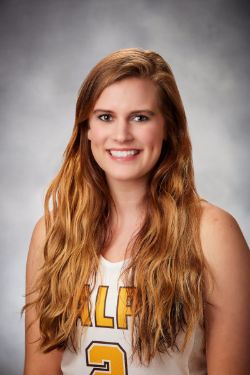 2017-18: Enters her senior season already ranking 18th in program history in career points with 949 and seventh in career 3-point field goals made with 153… Is Valpo’s leading returning scorer in 2018-19 at 11.6 points per game, a mark that ranked 11th in the MVC…Also ranked 13th in The Valley in 3-point field goal percentage at .335, leading her team in that area... Started in Valpo’s season opener for the third consecutive year... Scored a team-high 14 points on Nov. 21 at Miami (Ohio), her 25th career game scoring double figures... Followed with another double-figure output on Nov. 25 against Grand Canyon, again turning in 14 points... Poured in a season-high 25 points on Dec. 3 at Longwood, making a career-high nine free throws... Had a season-high five made 3s on Dec. 8 at Purdue, all in the first half. Scored 19 points in the game, all coming before halftime. Became the first Valpo player with a 19-point half this season and the first Valpo player to hit five 3s in one half since she did so at Northern Kentucky on Dec. 3, 2016... Had another game that featured five made 3s on Dec. 15 against IU Northwest. Set a season high and matched a career best with 29 points, her third straight season with a 29-point performance. Became the only player on Valpo’s roster who has scored more than 25 points in a game in each of the last three seasons... Handed out a career-high six assists on Dec. 18 at Eastern Illinois... Named the MVC Scholar-Athlete of the Week on Dec. 20, becoming the first Valpo student-athlete in any sport to earn that weekly award... In double figures for the third straight game with a team-high 19 points on Jan. 21 vs. Southern Illinois... Made her way into double figures for the fourth consecutive game with a team-high 18 on Jan. 26 against Evansville... Was the lone Valpo player in double figures on Feb. 2 at Bradley, finishing with 13 points... Led Valpo in scoring for the third time in four games on Feb. 4 at Illinois State, turning in 17 points off the bench... Exploded for 19 points in the fourth quarter on Feb. 11 at Loyola after being held scoreless for the first three quarters. That marked the most points scored by a Valpo player in a single quarter in program history and helped the team to a comeback win over the Ramblers... Led Valpo in scoring for the sixth time in eight games with 20 points vs. Missouri State on Feb. 18... Once again led Valpo in scoring with 13 points on Feb. 23 at Indiana State... Named 2018 MVC Scholar-Athlete Honorable Mention... Was one of two Valpo players in double figures in the first round of the MVC Tournament on March 8 vs. Loyola, turned in 12 points in an effort that featured three made 3s.

2016-17: Played in 29 games (28 starts) during her sophomore season... Entered the season as Valpo's leading returning scorer from 2015-16... Averaged 9.0 points per game, second on the team... Chipped in 4.2 rebounds per contest while ranking second on the team with 79 assists... Reached double figures on nine occasions... Made a game-winning layup at the buzzer to beat Chicago State on Nov. 16... Made a career-high seven free throws on Dec. 29 at Detroit Mercy...Matched a career-high with 29 points on Jan. 14 at Youngstown State. Established a new career-high with 12 made field goals in that game, just the 23rd time in program history a player has made 12 field goals or more in a single game... Pulled down a career-high 10 rebounds in the game against the Penguins, making it her first career double-double. Also matched a career watermark with three steals in the contest and reached the 500-point mark for her Valpo career... Dished out a career-best seven assists on Jan. 22 against Wright State... Saw her streak of 52 consecutive starts snapped on Feb. 2 against Youngstown State... Team Captain.

2015-16: Elected to Horizon League All-Freshman Team...started in all 31 contests as a rookie...averaged 10.6 points per game while splashing 69 three-pointers, the fifth-most ever in a single season by a Valpo player and the most ever by a Valpo freshman...shot a team-high 38.5 percent from beyond the arc...scored nine points, grabbed five boards and notched two steals in her collegiate debut at Hinkle Fieldhouse on Nov. 13...led Valpo in scoring versus No. 3 Notre Dame (Nov. 23), pouring in 10 points...again led her team in scoring at San Diego (Nov. 27) with 12 points (4-7 FG)...went 5-for-5 from deep as part of a 19-point performance vs. IU-Northwest (Dec. 12)...etched her name into Valpo’s record book after putting forth a 29-point effort in Valpo’s 61-60 win over Northern Kentucky (Dec. 30), where she was 10-of-11 from the floor to match Marlous Nieuwveen for the third-highest FG percentage in a single game...helped guide Valpo to a remarkable 94-91 win over Detroit in their Horizon League Championship opener on March 10, scoring 21 points (8-13 FG, 5-7 3 FG)... Named the team's Rookie of the Year.

Prep: Was a four-year letter winner for the McBain Ramblers...was named an Associated Press First Team player three times (2013, 2014, 2015), and a three-time All-North Team captain...led McBain to two conference titles, two Regional titles and a pair of state quarterfinal appearances...averaged 25.2 points per game, 8.0 rebounds per game and 6.3 assists per game her senior season...She holds the only quadruple-double in school history (22 points, 13 rebounds, 11 assists, 10 steals) and eclipsed Elizabeth and Annemarie's old all-time scoring record of 1,624 points her senior season as she finished with 1,856...an advanced, all-around athlete, she was a four-year starter with volleyball where she earned All-State Honorable Mention accolades in 2012, 2013 and 2014...Hamlet was named Academic All-State in both volleyball and basketball (2012, 2013, 2014), is McBain's all-time assists leader in volleyball....was a member of National Honor Society.

Personal: Parents are Todd and Patti Hamlet... Born on Aug. 6, 1996... Majoring in public relations with minors in sports management and professional writing... Comes from a Valpo family as the third of three sisters to play women’s basketball at Valpo. Oldest sister Elizabeth graduate transferred to Valpo for the 2013-2014 season after starting her career at Oakland. Middle sister Annemarie also went from Oakland to Valpo for the 2013-14 season but sat out that year due to transfer rules. Annemarie played the 2014-15 and 2015-16 seasons, the second of which was Meredith’s freshman year... The Valpo legacy within the family goes beyond the sister trio as both of her sisters have married former Valpo athletes. Elizabeth is married to former Valpo men’s basketball player Bobby Capobianco, who closed out his collegiate career with the 2013-14 season. This past summer, Annemarie married Jake Hanson, who played baseball at Valpo as recently as 2017... Serves as the co-President of Valpo’s Fellowship of Christian Athletes and is a member of the Public Relations Society of America (PRSSA) on campus... Traveled to Ethiopia this past summer as part of Athletes in Action, a 10-day trip that sends a team of collegiate women’s basketball players from across the country to compete and train alongside Ethiopian university and professional teams. Athletes in Action is a faith-based group and the goal of the trip was to teach people about the glory of God. The players did missionary work, played against the Ethiopian national team, visited schools, attended church and shared their testimony during the 10-day stay in Africa.