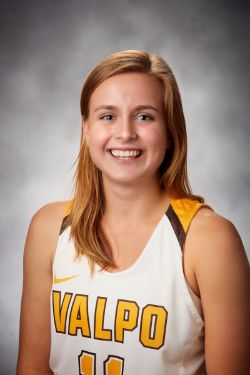 2016-17: Had a break out junior season, playing in 28 games and making eight starts for the Crusaders... Averaged 5.0 points per game and 3.1 boards per contest while picking up 56 assists, five blocks and 15 steals... Started the season with a career-high seven assists on Nov. 12 at Stetson... Reached double-figure scoring for the first time in her collegiate career with 10 at Notre Dame on Dec. 4, her first of four double-figure games... Made the first start of her collegiate career on Dec. 19 against Bradley and scored seven points in 20 minutes.... After making four 3-pointers in her first 18 games of the season, knocked down five triples in a three-game span from Jan. 22 to Feb. 2... Had a career-high eight rebounds on Dec. 29 at Detroit Mercy to lead the team in rebounding for the first time in her Valpo career. Also surpassed the 100-point mark for her career in that game... Posted a career-high 15 points on 5-of-8 shooting vs. Youngstown State on Feb. 2, including a career-high three 3-pointers...Finished with over 50 assists this season after having four total assists in her first two seasons... Team Captain... Garnered the team's Fountain Award winner for the second straight season, an honor given annually to the player who most raises the team’s energy level... Shared the team's Most Improved Player Award with Dani Franklin.

2015-16: Appeared in nine games as a sophomore...logged her first career assist versus No. 3 Notre Dame on Nov. 23...secured a career-high five rebounds on Dec. 12th in her return to the court vs. IU-Northwest....inspired the Crusaders in the season finale versus Northern Kentucky (March 11) to the tune of five points and two rebounds in seven minutes... Won the team's Fountain Award.

2014-15: Played 10 games in her rookie campaign with the Brown and Gold...made her Crusader debut on Dec. 9, when she recorded a steal, hauled in two rebounds and sank her only field goal attempt (a 3-pointer) at South Dakota..provided a jolt off the bench as she set season watermarks in both points and free throws with nine and seven, respectively, vs. Green Bay (Jan. 29).

Personal: Georgi is the daughter of Jay and Tina Donchetz...major is excercise physiology... born April 12, 1996.