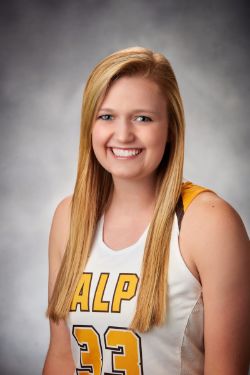 2017-18: Played in 20 games as a junior at Valpo… Played 12 minutes in the season opener against IU Kokomo... Knocked down the only shot she attempted against Miami on Nov. 21... Had a key steal that led to a fast-break 3 by Franklin in a Nov. 25 win over Grand Canyon... Scored four points on Jan. 28 vs. Indiana State… Turned in a season high in scoring in the final game of the season for the second straight year, scoring five points on March 9 against Drake in the MVC quarterfinals.

2016-17: Appeared in 29 games and avearged 3.1 points and 1.2 rebounds per game during her sophomore season... Rose to the occasion on Dec. 4 at Notre Dame, scoring eight points... Notched a career-high 15 points and led the team in scoring in the final game of the season, a Horizon League Tournament matchup with Green Bay, going 4-for-4 from 3-point range.

2015-16: Appeared in 13 contests in her inaugural campaign with Valpo...went 3-for-4 from the charity stripe at Louisville (Dec. 5) for her first collegiate points...recorded her first collegiate steal versus Cardinal Stritch (Dec. 7)...knocked down her first 3-pointer vs. IU-Kokomo (Dec. 21) as part of a five-point night...had a 2-for-2 night from the field, including a 3-pointer, to match her season high in points with five at Green Bay (Jan. 14)...grabbed a rebound at Milwaukee (Jan. 16)...secured a board vs. Northern Kentucky on Feb. 6...drilled a triple at Youngstown State (Feb. 26).

Prep: A four-year letter winner for the Eagles, Schofield led Heritage Christian in 3-point shooting and free-throw shooting every season since her freshman year. The Eagles were 57-4 with her as a starter. Heritage Christian won a 2A State Championship as well as back-to-back 2A Sectional Champions with Schofield. Individually, Schofield has been named to the Hoosier Basketball Magazine First Team All-State Team in 2014-15 after earning Second Team honors in 2013-14. She was nominated as a Preseason All-State Second Team recipient, an Associated Press All-State Area Team Honorable Mention and a Hoosier Basketball Magazine North/South Indiana All-Star in 2014. Schofield led her AAU team to three state titles as well as a national championship. She was a High Honor Roll member in 2011-2012, and named to the Honor Roll for the 2012-13 and 2013-14 academic years.

Personal: Graduated on Sunday, Dec. 9 with a major in biology and minor in business. Will start her Master of Business Administration in January... Has garnered experience in her field by doing job shadows for pharmaceutical and medical device sale companies during her time on campus. She shadowed with Eli Lilly two summers ago and Stryker this past summer.