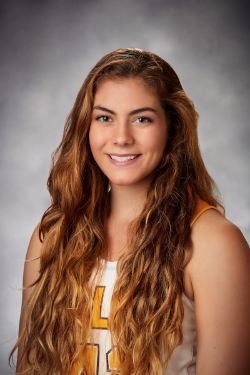 2015-16: Played in 28 games in her second season with the Crusaders, including two starts...shot a team-best 51.9 percent (54-for-104) from the floor...squeezed six boards to go with three points in her season debut versus No. 3 Notre Dame on Nov. 23...pitched in six points and four rebounds vs. Northern Colorado (Nov. 28)...snagged two steals, hauled in a pair of rebounds, and scored two points at Louisville (Dec. 5)...compelled the Crusaders to a win over Cardinal Stritch (Dec. 9) netting a career-high 16 points - 14 of which came in the second half - in 16 minutes off the bench thanks to a 6-of-7 night from the floor...again shot at a 50 percent clip from the field, knocking down three of six field goal attempts to finish with eight points and five boards vs. Akron (Dec. 9)...chipped in three points in Valpo’s 79-57 win over IU-Northwest on Dec. 12...matched a season-high in rebounds with six in Valpo’s 69-56 win over SIU-Edwardville (Dec. 19)...provided six points and nine rebounds off the bench in Valpo’s 88-22 defeat of IU-Kokomo (Dec. 21)...blocked a career-high two shots and pitched in six points in a 61-60 triumph over Northern Kentucky (Dec. 30)...received her first starting assignment of the season at Wright State (Jan. 1), where she recorded two points and five rebounds...went 2-for-3 from the field vs. Detroit (Jan. 7)...knocked down her lone shot attempt versus Oakland (Jan. 9) in an 81-66 win over the Golden Grizzlies...pitched in four points at Green Bay (Jan. 14)...shot 2-for-4 from the field and 2-for-2 at the line to finish with six points and four rebounds at Milwaukee (Jan. 16)...contributed two points and two boards in a 65-60 win over Youngstown State on Jan. 23...pitched in six points and two rebounds versus Wright State (Feb. 4)...grabbed a steal, recorded three points and squeezed four rebounds vs. Northern Kentucky (Feb. 6)...made her way into double figures at Detroit (Feb. 13) on 4-of-6 shooting to accompany four rebounds, a block, a steal and an assist...speared four rebounds, blocked a shot, dished out two assists and scored two points vs. Green Bay (Feb. 20)...was perfect from the foul line in an eight-point, six-rebound effort at Youngstown State (Feb. 26)...collected two boards at Cleveland State (Feb. 29)...led Valpo to an 80-74 win at UIC on March 5, scoring 14 points on 6-of-9 shooting and fetching seven boards while distributing three assists...dropped in four points, blocked a shot and corralled a rebound in Valpo’s 94-91 overtime thriller over Detroit (March 10) in the Horizon League Championship opening game.

2014-15: Appeared in 25 games with the Brown and Gold in her first season, making 15 starts...shot 4-of-8 from the floor in her Crusader debut to finish with 10 points, three boards, an assist and a steal in Valpo’s 91-57 win over Butler (Nov. 14)...knocked down both free-throw attempts, secured two boards and collected a steal in a four-point night at Indiana (Nov. 18)...scored two points, and grabbed two boards in the Crusaders’ 65-50 win at Northern Illinois (Nov. 20)...pulled down five rebounds, blocked a shot and scored a basket in Valpo’s victory over Tennessee Tech (Nov. 22)...led Valpo with 10 rebounds at Akron (Nov. 25) and registered five points...held her own against some of the top post players in the country versus No. 12 Louisville (Nov. 30), scoring eight points and corraling four rebounds...had the best game of any Crusader post player at Miami of Ohio (Dec. 3) as she logged eight points, six boards and a pair of steals...shot 6-of-11 from the field as part of a 14-point, four-rebound day versus Tulsa (Dec. 6)...did it all at South Dakota (Dec. 9) as she had eight points, five rebounds, an assist, a steal and a block...finished a point and a rebound shy of her first double-double in a Crusader uniform as she posted nine points, nine boards and career-high three assists versus Illinois (Dec. 13)...dished out three assists, scored three points, rejected a shot and snagged a steal at SIU-Edwardsville (Dec. 20)...assembled her first double-double in a Crusader uniform as she finished with 15 points (6-of-12 shooting) and 11 rebounds including an assist and a steal in Valpo’s 109-81 win over Purdue-Calumet (Dec. 30)...posted her second consecutive double-double with an 11-point, 11-rebound day versus Stetson on Jan. 3...finished in double figures for the third straight game after her 10-point, four-board night at Cleveland State (Jan. 8)...registered six points, a pair of rebounds, and an assist versus UIC (Jan. 10)...converted six of 10 field goal attempts as her 14 points led the Crusaders vs. Oakland (Jan. 15)...blocked a shot and grabbed a board vs. Wright State (Jan. 17)...hauled in 11 rebounds at Green Bay (Feb. 19)...recorded five points, five caroms and two assists versus Youngstown State (Feb. 21)...knocked down here only FG attempt of the night vs. Cleveland State (Feb. 25) in a three-point affair...had back-to-back-to-back two-point, two-rebound games vs. Detroit (Feb. 28), at Oakland (Mar. 5) and at Youngstown State (Mar. 7).

Prep: A three-year letter-winner for the Wolverines at Wood River High School in Hailey, Idaho...scored 780 points in her high school career, the fourth-highest in Wood River history and broke 30 school records...school was district champs her junior and senior seasons and finished second at state her junior year...had 23 double-digit games as a senior...Great Basin Conference all-league Co-Player of the Year...named Athlete of the Week twice by KMVT TV...Times News 4A-3A Girls Basketball Player of the Year...lettered two years in football and four years in softball.

Personal: Haylee is the daughter of John Thompson and Kim McKinnon...majoring in biology...born Nov. 24, 1994.