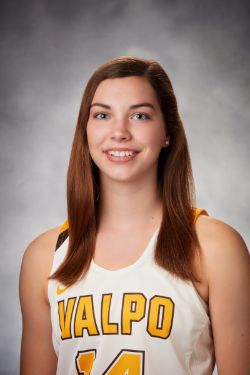 2019-20: Saw action in 18 games off the bench, averaging 11.2 minutes/game ... recorded 5.2 points and 2.6 rebounds per game and shot at a .661 clip from the field ... led Valpo in rebounding three times and scored in double figures twice ... in just second game back from injury, scored 10 points (3-3 FG; 3-4 FT) - including first career 3-pointer - and grabbed three rebounds Nov. 21 at Northwestern ... scored two key baskets in final minutes of Nov. 27 win at Toledo ... notched seven points and five rebounds in Dec. 15 win over UIC ... went 4-of-5 from the floor for eight points in Dec. 17 win over Morehead State ... smashed career high with 17 points in Dec. 28 win over Chicago State, going 7-of-8 from the field ... 7-of-8 effort from the floor is tied for the 10th-best single-game field goal percentage in program history ... also led Valpo with a season-high eight rebounds in the win over the Cougars ... registered seven points and a team-best five rebounds in Jan. 10 win at Indiana State ... hit all three of her field goal attempts in six-point, four-rebound effort Jan. 12 in win at Evansville ... suffered injury against Bradley Jan. 19, but returned to make three appearances in season's final six games, including pair of key performances in Valpo wins ... contributed four points and three rebounds in Feb. 16 win at Illinois State, as well as a key assist and key blocked shot late in fourth quarter ...  saw nine minutes of action in win at Southern Illinois March 7, connecting on key 3-pointer late in the shot clock early in fourth quarter in win.

2017-18: Played in 28 games and made one start… Averaged 3.9 points and 3.4 rebounds per game… Scored the first field goal of her collegiate career in Valpo’s season opener against IU Kokomo on a memorable coast-to-coast layup. Also hauled in a career-high five rebounds in that contest... Set then career highs in points (nine) and rebounds (six) in the first road game of the season on Nov. 21 against Miami (Ohio)... Had the first two steals of her Valpo career on Dec. 3 at Longwood, scoring seven points and pulling down five rebounds... Upped her career best to 11 points after going 5-of-7 from the floor on Dec. 15 against IU Northwest... Paced the team in rebounding for the first time in her collegiate career on Dec. 29 at Drake with six, matching a career best... Shattered her previous rebounding career high before halftime and had nine boards (eight in the first half) to lead the team on Jan. 21 at Southern Illinois... Scored 10 points, her highest career total against a Division-I team, while also gobbling up eight rebounds on Jan. 26 vs. Evansville... Made her first career start on Feb. 4 at Illinois State.

2016-17: Played in two games during her first season on campus... Made her collegiate debut on Nov. 16, seeing three minutes of action at Chicago State... Scored the first points of her collegiate career on Nov. 21 vs. IU Kokomo, swishing a pair of free throws... Missed the bulk of the season due to an injury... Received a medical redshirt and retained four years of elgibility.

Prep: Was well on her way to 1,000 career points as a senior until a knee injury derailed her final month and a half… Rattled off 17.6 points, 9.8 rebounds, 3.2 steals and 1.5 blocks per game in her final prep campaign with the Highland (Ohio) Hornets… Collected honorable mention All-State on top of First Team All-Suburban League and All Tri-County… Was touted as the 38th-ranked player in the state of Ohio and first-team all-Ohio before her senior season... Won Suburban League Player of the Year Award.

Personal: Parents are Scott and Laura Profitt... Born on March 4, 1998... Is involved in Fellowship of Christian Athletes (FCS), Student-Athlete Advisory Committee (SAAC) and Bioengineering Club... Majoring in biomedical engineering with a minor in Spanish... In a human movement research lab... Interned with her knee surgeon this past summer, shadowing ACL surgeries and seeing patients in the office... Attended the annual American Society of Biomechanics Meeting this past summer and presented research... Volunteers at dog shelters... Her mother played volleyball at Youngstown State and her aunt did so at Cleveland State. Profitt, her mother and her aunt have all played in the Horizon League at one point in their careers... Brother is a junior in high school and plays varsity football and basketball. He broke the school’s single-season record for receiving touchdowns this fall.