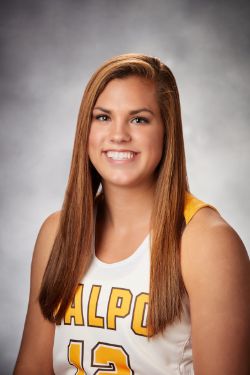 2019-20: Started all 29 games for Valpo during redshirt junior season, averaging 11.4 points and 5.4 rebounds per game in 28.9 minutes/game of action ... led the team in rebounding, while ranking second in scoring and assists (2.1/game) ... hit at a 41.7% clip from the 3-point line and 80.9% from the foul line ... ranked fifth in the MVC in 3-point percentage and eighth in free throw percentage ... scored in double figures on 17 occasions ... led Valpo in rebounding 17 times, scoring eight times, blocked shots eight times, steals eight times and assists four times ... opened season with three straight double-figure scoring efforts, including 21 points in win at North Dakota State Nov. 15 and 23 points and a team-high nine rebounds Nov. 17 at North Dakota ... recorded 13 points and a team-high seven rebounds in Dec. 5 win at Detroit Mercy ... led Valpo with 18 points in win over Chicago State Dec. 28 ... came up with season-high four steals to go with team-high 13 points in MVC opener against Southern Illinois Jan. 3 ... was perfect from the foul line 11 times in a 12-game stretch Jan. 5-Feb. 16 ... went 6-of-8 from the floor, leading Valpo with 16 points and five rebounds in Jan. 10 win at Indiana State ... scored in double figures five consecutive games Jan. 24-Feb. 8 ... tallied 11 points and a team-high eight rebounds along with a career-best tying four assists in come-from-behind win over Loyola Jan. 24 ... hit all three of her 3-point attempts en route to 16 points and seven rebounds in Feb. 6 win over Evansville ... narrowly missed double-double in Feb. 8 win over Indiana State, posting 13 points and nine rebounds ... stood out in Feb. 16 win at Illinois State, leading the way with a career-high 25 points and a season-best 10 rebounds ... went 9-of-13 from the field to set a career high for field goals made, was 3-of-4 from the 3-point line and 4-of-4 from the foul line ... scored 13 of her points against the Redbirds in the first quarter to give Valpo a lead it would not relinquish ... scored 14 points, including a career-best eight free throws, in Feb. 22 win at Loyola.

2018-19: Had a breakout season, starting all 32 games while leading the team in scoring at 12.8 points per game and rebounding at 6.6 per contest… Ranked 13th in The Valley in scoring and ninth in rebounding while also finished third in The Valley in steals per game with 2.1 and seventh in offensive rebounds per game with 2.3… Was one of two Valpo players (along with Meredith Hamlet) to exceed 400 points, marking the first time since 2007-08 that Valpo had two players exceed 400 points in the same season… Joined Dani Franklin and Tabitha Gerardot as the only Valpo players in the last decade with 400+ points and 200+ rebounds in the same season… Had 67 steals, the most by a Valpo player since Laura Richards in 2011-12… Finished the season with 109 made free throws, the most by a Valpo player since 2007… Got to the free-throw line for 156 attempts, the most by a Valpo player since 2000… Poured in a career-high 17 points on 7-of-14 shooting while making her second career start in the season opener on Nov. 7 at UIC. Also pulled down five rebounds and achieved a personal best in steals with four... Filled the stat sheet with nine points and a career-high eight rebounds in the first home start of her career on Nov. 11 vs. North Dakota... Continued her early-season surge with 12 points on 5-of-10 shooting in front of numerous family members and friends while playing close to her hometown of Cissna Park on Nov. 14 at Illinois... Was on double-double watch in both games at the Vinewood Farm Classic, first turning in nine points and a career-high 10 rebounds on Nov. 16 at Morehead State before accumulating nine points and pulling down eight boards on Nov. 17 vs. St. Francis Brooklyn. Her 10-rebound game allowed her to become the first Valpo player with a double-figure rebounding effort during the season... Made 10 free throws on her way to a career-high 18 points on Nov. 29 at Chicago State. Finished one rebound shy of a double-double... After coming close on several prior occasions, enjoyed her first career double-double on Dec. 16 vs. North Dakota State with 11 points and 10 rebounds, equaling a career best on the boards... Posted a career-high 20 points to lead all scorers in a 68-64 win on Dec. 19 at Purdue Fort Wayne. She also had a game-high four steals... Scored in double figures for the seventh time in an eight-game span by sharing the team lead with 13 points on Jan. 11 at UNI... Had career highs in scoring (22) and rebounding (11) while turning in Valpo’s first 20&10 game since November 2017 on Jan. 25 at Southern Illinois, her second career double-double... Finished two points shy of a career high with 20 and two rebounds shy of a double-double in a Feb. 1 win over Bradley... Led the team in scoring with 15 points while finishing a rebound shy of a double-double on Feb. 15 at Evansville... Matched a career high with 22 points against first-place Missouri State on Feb. 22, reaching double figures for the fifth straight game... Accounted for over half of her team’s scoring by pouring in a career-high 24 points in a 58-47 defeat vs. Southern Illinois on Feb. 24... Had her third career double-double with 22 points and 11 rebounds, matching a career high in boards while helping Valpo beat Loyola on March 9 at the ARC… Was honored at the year-end Valpo Athletics awards banquet, the ARC Awards, as the Rebecca D. Carter Memorial Award winner, which is given to the female student-athlete who best exemplifies integrity and sportsmanship while representing Valparaiso University.

2017-18: Played in 17 games and made one start as a redshirt freshman for Valpo… Scored 3.3 points per game and pulled down 1.9 rebounds per contest… Played in her first game in over a calendar year on Dec. 2 at Liberty, scoring her first basket of the season by converting a layup despite being fouled... Enjoyed her highest scoring output of the season on Dec. 29 at Drake, scoring eight points while making four field goals in a single game for the first time in her career... Pulled down a season-high four rebounds on Dec. 31 at UNI... Missed the Jan. 5, Jan. 7 and Jan. 12 games due to illness... Had a strong second quarter on Jan. 19 at Missouri State, scoring six points on 2-of-2 shooting and 2-of-2 at the free-throw line in that quarter alone... Made her first career start on Feb. 4 at Illinois State.

2016-17: Played in the first five games of the season before suffering a season-ending knee injury on Nov. 25 vs. Liberty... Received a medical redshirt and retained four seasons of elgibility... Had her best performance of the year in her return to her hometown area on Nov. 19 at Illinois State, turning in nine points and seven rebounds... Received the team's Hardest Worker Award.

Prep: Graduated from Cissna Park High School as one of the best to don a Timberwolves' uniform… Illinois Basketball Coaches Association First Team All-State selection… Holds the school record in career rebounds (1,110), steals (381) and assists (358)… Concluded her prep career with 1,807 points, the second-most in program history… Averaged 18.1 points, 9.8 rebounds, 3.5 steals and 2.5 assists per contest… Carried the Timberwolves to a 29-3 record and a berth in the 2016 IHSA Girls Basketball State Championships.

Personal: Parents are Sam and Sue Stoller... Born on Sept. 17, 1997... Is involved in several organizations on campus including Fellowship of Christian Athletes, Kinesiology Club and FMS research team... Had an internship this past summer at a gym called Elite Sport and Fitness in Gibson City, Ill... Has helped with her parents’ business, Illiana Insulation, a foam and coating insulation business in Cissna Park, Ill... Older sister Samantha played volleyball at Trinity International University and is currently an executive assistant in athletics at UMKC, where she oversees office management, student-athlete scholarships and the distribution of sponsorships and trade... Father Sam participated in rugby at Purdue and mother Sue played a year of basketball at Biola University in California... Younger sister Olivia is attending cosmetology school and younger brother Penn is a junior in high school and is into football and basketball... Enjoys water sports and the outdoors. Family goes camping and boating frequently over the summer. Will ski, slalom, surf and tube and also loves hiking, four wheeling and other outdoor activities... Growing up, her favorite sport was soccer and played travel soccer in junior high but stopped because her high school didn’t offer soccer... Majoring in exercise science with plans of getting a master’s in athletic training. Minoring in human biology.