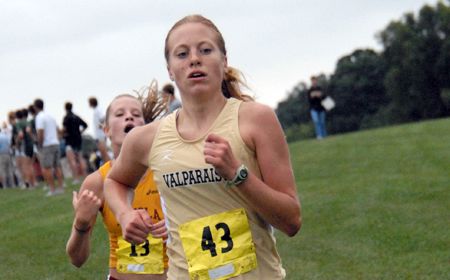 Bradford, a junior who carries a 3.971 cumulative grade point average as an exercise science major, paced the Crusaders in the middle distance events during the 2009 track season, registering top-ten finishes both indoors (fourth) and outdoors (ninth) in the 800m run at the Horizon League Championships.  She was a member of the league’s indoor track and field Academic All-League squad, earned Scholar-Athlete of the Week recognition earlier this year, and has earned Dean’s List and Valpo Presidential academic honors at Valpo.

Gilman, a junior who carries a 3.990 cumulative GPA as a chemistry and mathematics major, was an integral part of Valpo’s cross country squad this year despite never having run cross country at any level prior to this season.  She finished among the Crusaders’ top four finishers every time out, running a season-best 5K time of 19:10.04 at the Evansville Invitational.  A member of the Horizon League cross country Academic All-League team, Gilman has been named to the league’s Academic Honor Roll each of Valpo’s three semesters in the league and has earned Dean’s List and Presidential academic honors at Valpo.

Rolf, a senior who posted a 3.587 cumulative GPA as a new media-journalism major, earned her third consecutive Academic All-District honor.  The senior repeated as the Horizon League Cross Country Athlete of the Year after repeating as the league’s individual champion, and earned All-Region accolades for the fourth straight year.  During the indoor season, Rolf was named Most Outstanding Runner at the league championship meet after setting new championship records in both the 3K and the 5K.  A four-time Horizon League Athlete of the Week, Rolf was a member of the Academic All-League squads in both cross country and indoor track, was named to the league’s Academic Honor Roll, and earned Dean’s List and Presidential academic honors at Valpo.

To be eligible for Academic All-District, student-athletes must hold at least sophomore status, own a minimum cumulative GPA of 3.20 and be a key contributor to their respective team.  District V consists of schools in Indiana, Illinois, Wisconsin, Minnesota, Ontario and Manitoba.  By virtue of their first team placement, Bradford and Gilman will now become eligible for Academic All-American honors.