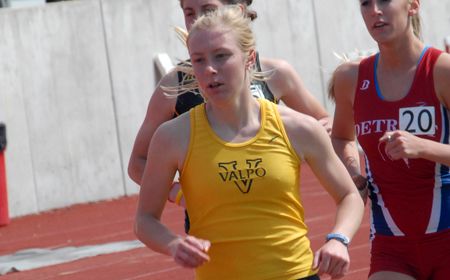 Bradford earns First Team Academic All-District accolades for the second consecutive season after a stellar final season across all three sports.  The senior finished among Valpo’s top-five runners five times during the cross country campaign and paced the Crusader contingent twice, including at the NCAA Great Lakes Regional.  She earned three third-place finishes during the indoor track and field season in the 800m run, and also posted four top-tens outdoors in the same event.  Bradford ran a season-best time in the 800m run of 2:18.12 at the Horizon League Championships outdoors, fifth-best in Crusader history.

In the classroom, Bradford holds a perfect 4.00 GPA while working towards a master’s degree in secondary education after posting a 3.975 GPA as an undergrad.  A four-time Academic All-League honoree, she shared Valpo’s Laurel Award, honoring the senior student athlete with the highest cumulative GPA.  Bradford has earned Presidential academic honors and been placed on the Dean’s List during her time at Valpo, while also earning a spot on the Horizon League Academic Honor Roll.

Gilman also repeats as a First Team Academic All-District selection after completing her senior year as a Crusader.  She finished among Valpo’s top-five runners in all six races during the cross country season and led the Crusader team twice, including a season-best 5K of 19:25 at the Notre Dame Invitational.  Gilman came back during outdoor season and showcased her versatility, competing in the javelin throw.  The senior unleashed a season-best toss of 101’8” at the Horizon League Championships, good for a sixth-place finish.

In the classroom, Gilman holds a 3.982 GPA as a chemistry major and shared Valpo’s Laurel Award with Bradford this year.  A two-time Academic All-League honoree for cross country, Gilman has been named to the Dean’s List and earned Presidential academic honors at Valpo while also receiving recognition on the Horizon League Academic Honor Roll.  Gilman also received the Top Student award for the U.S. Department of Energy-sponsored Nuclear and Radiochemistry summer school during the summer of 2009.

Santa Cruz, a chemistry major who carries a 3.919 GPA, earns Academic All-District honors for the first time.  The senior closed her final season among Valpo’s fastest runners indoors in the 800m and one mile runs, as well as outdoors in the 800m and 1,500m runs.  A three-time Academic All-Horizon League honoree, Santa Cruz earned Presidential academic honors and was named to the Dean’s List during her time at Valpo, as well as consistently earning a spot on the Horizon League Academic Honor Roll.

With their First Team selections, Bradford and Gilman are now both eligible for Academic All-America honors, to be announced on June 24.